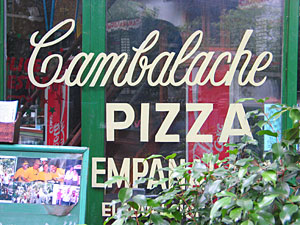 A friend of mine has a theory which is best expressed as “every culture has its version of burrito.” He means that no matter what country you go to, the local ethnic food will include a dish that involves wrapping some tasty filling up in some bread or bread substitute (tortilla, seaweed, bread, rice paper, lettuce, crepes, etc.). Why he has this theory, I have no idea, but I have yet to find an exception. Perhaps its because this sort of eating is fast and filling for the hard working lower classes in every culture, who leave early, come home late, and need something that sticks to their ribs, so to speak.

While I’m no authority on Argentine cuisine after just a few days in the country, it seems pretty clear that the Argentinean entry into this category of foodstuff is the empanada, a pastry crust folded over into a half circle or full circle shape filled with all manner of savory stuffings that is served everywhere from street side stands to all but the fanciest sit down restaurants.

I’ve had my share of empanadas in Spain and also in the United States, though they aren’t particularly common. Actually, I should probably be a little more honest: I practically survived on them while backpacking around Spain for over a week in college. They were hot, filling, easy to order, and most importantly, cheap. Unexpectedly, after eight or nine days of empanadas for lunch and dinner, I had lost no affection for these little pastries, and I still love them today.

Which is why, when an acquaintance whose opinion about food I tend to trust told me about the best empanadas he’d ever had in his life, I wrote down the address and ate my first lunch in Buenos Aires at Cambalache.

Standing on the corner of Juncal and Laprida this unassuming restaurant named after a “second hand shop” bills itself first as a pizzeria. With a couple of plastic tables on the sidewalk shaded by trees and beer-sponsored umbrellas and sports running nonstop on a couple of small televisions in the corner, it would be easy to overlook this restaurant as just another neighborhood hangout. Of course, that is precisely what it is. But step up to the counter, look back into the kitchen, and it is quickly apparent that these folks take the empanada business very seriously.

Big chunks of hand kneaded dough are worked by the owners into heaps and piles of fresh empanadas that are snugly fit onto trays and shoved into the blistering hot oven to cook all morning long. The finished empanadas accumulate in piles again, sorted by their flavor and stuffing. On any given day, they come in several varieties, including shredded spicy beef; mozzarella with ham, tomato and egg; ham and pineapple; vegetables and cheese; and more.

There’s a huge difference between your average empanada and those which might be considered top examples of the form. The primary and most important difference has to do with the dough. Most fall too easily into the “leaden” category. 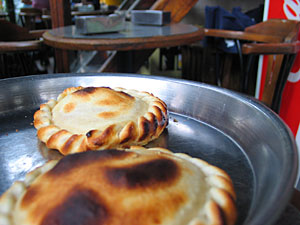 Their dough is heavy, even doughy, and really just something that you want to get past in order to get to the good stuff inside. The best dough tends to either have a light spongy quality or a airy, flaky quality. Cambalache’s fall into the latter category, with a near croissant-like texture.Once past the dough, of course, the filling of a high quality empanada must be moist, even juicy, and made from fresh ingredients, including high quality meat. The contrast between this juicy, stewed texture inside and the crust enclosure are the yin and yang of the empanada, the analog to a pizza’s crust and its topping. If either is out of balance, the whole fails.

Cambalache’s empanadas do not disappoint, either in their flavor or in their ability to do what you want empanadas to do: fill you up the to the point of bursting. For an ordinary lunch, Ruth and I were only able to put down about two apiece, but I can see myself potentially eating three and maybe if I was really hungry, four. Any more than that and you need to be a competitive eater. Of course, if your eyes happen to be bigger than your stomach, it’s not that big of a deal. You can just take them home. And at about $0.80 US apiece, you’ll certainly not be hurting yourself financially should you get wild and crazy and decide to try all five varieties.

How Much?: Lunch for two will run you about $6 US.

The restaurant is extremely informal, no reservations required, just drop by when you’re in the neighborhood. The restaurant will also deliver. Apparently (this is unconfirmed) they are literally open all the time.