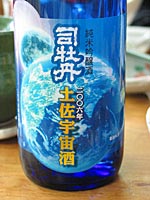 Did I mention how much I love the Internet? I suppose its fairly obvious as a blogger that I dig this whole medium, but honestly, it has made so many fantastic things possible in my life. Take, for example the following story.

About two months ago, I wrote a post here about Tosa Space Sake. Thanks to the magic of news feeds I was able to find out that as a crazy marketing stunt of some sort, a group of Japanese sake manufacturers had figured out how to get some yeast on a rocket into space for some time. Once it came down, they were going to make some sake from it and sell it as Sake from Space.

The idea tickled me to death, and I felt compelled to share it with my readers. About a week after posting this story, I got an e-mail from one of my readers, saying that she and her partner were on their way to Japan in a couple of weeks and that through a good friend, they were going to try their darndest to get their hands on some of this Space sake. She went on to ask, if they managed to get a hold of some, would I mind joining them for dinner to taste it.

I find this sort of thing frankly miraculous. It has become commonplace to connect with people over the Internet (heck, I met my wife on Match.Com), to the point that I think many of us take it for granted. But I find it incredible that one day I can be posting a tidbit about some wacky Sake made from post-orbital yeast, and five weeks later I can be sitting in a sushi restaurant with two perfectly lovely strangers who have carried a couple of bottles of the stuff back from Japan with the sole purpose of sharing it with me. I mean, really.

But there we were, nibbling at hirame nigiri and swirling and sniffing at bottles emblazoned with planets and rocket ships, chatting away about wine and sake and Tokyo restaurants, Kyoto gardens, and more. And now, of course I’m writing about it, not only to say thank you to Mora and Linda for their incredible thoughtfulness and generosity, but also to share with you dear reader, the flavors of space. 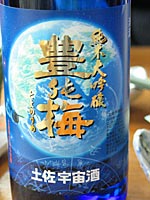 Without further ado, then, here are the tasting notes for Tosa Space Sake!

Toyo no Ume Tosa Space Sake, Junmai Daiginjo, Kochi Prefecture (Shikoku), Japan
Colorless and viscous in the glass this sake has a light floral quality to its nose, with faint aromas of jasmine and rainwater. In the mouth it is smooth on the tongue with flavors of wet wood and a light acidity that doesn’t have the strength to make for a livelier flavor or complexity. The finish has an unusual heat for a Junmai sake.
Pleasant but not particularly remarkable. Score: 8/8.5.

Tsukasa Botan Tosa Space Sake, Ginjo, Kochi Prefecture (Shikoku), Japan
Colorless in the glass, this sake has a nose of dry balsa wood and minerals. In the mouth it is also a bit woody in flavor, with additional flavors of rainwater and light melon notes. The finish is smooth and pleasant, surprisingly more so than the Junmai. Score: 8.5/9.

Tosa is the old name for the Kochi prefecture, which is on the tiny island of Shikoku, off of the southern coast of Japan’s main island. There, a group of 19 sake brewers managed to convince the Russian space program to take a bunch of their yeast into orbit aboard a Soyuz space capsule. In total, eight kinds of dry yeast and four kinds of wet yeast, each in a test tube containing 2 grams of material, spent 10 days in orbit. The effects on the yeast are unknown, but nobody seems to care. The sake brewers promptly started making sake when the stuff came back to earth, and the first of these sakes went on sale on April 1st.

I have no idea how much these sakes are, or how you might get a hold of them, but I suspect the only place to get them is Japan. Of course, you might try looking on the Internet — you never know what you might come up with.