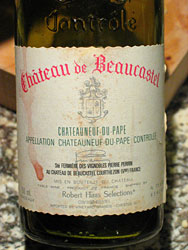 Wine, when at its most triumphant and expressive, nearly defies description. Some people speak of “perfect wines” which is always a problematic moniker, because the appreciation of wine is always contextual and always subjective. But there are some wines that have a magic to them — from the instant they touch your lips to the residual memories that linger for days after their consumption. These wines bafflingly seem to be more than the sum of their parts, as if someone added two and three and got six — they shine brighter and deeper than it seems possible for a simple splash of liquid in the glass.

This, for me, was one of those wines.

Chateau de Beaucastel, by anyone’s measure is one of the worlds most prestigious wine estates. It is certainly one of, if not THE top producer in the Southern Rhone valley, known for its rich history, dedication to quality, and for the longevity and personality of its wines.

The estate which lies outside of the town of Courthezon, has been run by the Perrin Family since the early part of the 20th Century, and under the hands of the late Jacques Perrin and now his two sons, it has risen to greatness. The Beaucastel name goes back much farther than that (to the early 16th century to be exact) and the estate has been a prominent wine producer since the 19th century, but in the last fifty years it has produced some of the most profound and interesting wines from the Chateauneuf-du-Pape region.

Like many great wine producers, the Perrins have a singular vision for their wines which is not exactly “the standard approach.” For starters, Beaucastel is one of the few producers whose vineyards are still planted with all of the 14 allowable varietals that make up the legendary composition of Chateauneuf-du-Pape wines. For the record, these are: Grenache, Syrah, Mourvedre, Cinsault, Muscardin, Vaccarese, Picpoul, Terret Noir, Counoise, Clairette, Grenache Blanc, Bourboulenc, Roussanne, and Picardan. However traditional they may be in their devotion to the allowable vine varieties, the Perrins are decidedly iconoclastic in their own blend of these varietals, favoring a much higher concentration of Mourvedre in their wine than any other producer. While in most wines of the region Grenache is the highest percentage of the blend, in their standard wine the Perrins usually offer equal percentages of Grenache and Mourvedre (usually about 30% of each).

Chateau de Beaucastel farms all of its 272 acres (one of the largest estates in the Southern Rhone) organically and with an emphasis on cultivating the low yields of their old vines. Through a careful system of replanting, they miraculously manage to keep the average age of their vines around fifty years old, though some of their vines are between 60 and 90 years old. These older vines are used to produce some of the special cuvees made by the estate, including the one named after the late Jacques Perrin, which has become the flagship wine of the estate in the past couple of decades.

This wine is a blend of 30% Mourvedre, 30% Grenache, 10% Syrah, 5% Cinsault, 1% Cunoise, and smaller amounts of Vaccarese and Muscardin. It is hand harvested and destemmed and after crushing, undergoes fermentation in cement tanks for three weeks before being aged up to 18 months in large, old oak casks known as foudres. It is lightly fined with egg whites before bottling, but never undergoes any filtration whatsoever — filtering being one of the chief evils of modern winemaking according to the Perrin family tradition.

They say there are no great wines, only great bottles of wine, and especially with wines of this region, from this era, there can be considerable variation from bottle to bottle. The one I sampled, at the gracious generosity of a friend who purchased it upon release, was stored impeccably and clearly represented the best that this wine could be. It outshone several other incredibly impressive wines, including a 1995 Romanee St. Vivant, a 1986 Ducru-Beaucaillou, and an 1982 Beychevelle, as well as several other stellar wines. This was truly a fantastic wine.

It does not matter to me in the slightest, but it may be interesting to others to know that my evaluation of this wine differs considerably from those of other critics, whose last scores place it in the high 80s and low 90s.

Tasting Notes:
A medium ruby color in the glass, with very little brick or orange highlighting to betray its age, this wine has a nose of bacon fat, raspberry, mud, and the mix of Provencal herbs that the French call garrigue. There is also a savory umami character to the aromas of the wine, which with more air add a soy note to the overall composition. In the mouth the wine is perfectly balanced with an acidity that makes it pop in the mouth with juicy flavors of raspberry and redcurrant fruit. The wine has gorgeous texture and a light tannic structure which supports deeper more resonant elements of flavor that lean towards the herbal and ever-so-slightly leathery side. The finish simply goes on forever, and like most wines of this caliber, both compels awestruck contemplation as well as immediate additional consumption. Phenomenal.

Food Pairing:
While certainly expressive standing alone, this wine would go beautifully with these roasted veal chops, shallots and a jus.