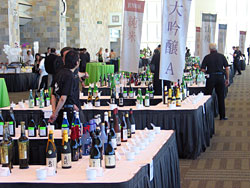 I fell in love with sake on my second day in Japan. I was taken to a private sushi club by the CEO of the partner company I was working with, and not being much of a beer drinker (but knowing that I was expected to drink) I suggested that I might prefer sake. Out from behind the tiny sushi bar came a big brown bottle with a beautiful paper label and a chilled glassful was poured in front of me. That first taste of wet earth after a rain, cedar forests, and ocean fog electrified me. Good sake, especially with the delicate flavors of Japanese food, will always be one

of my favorite beverages.

Much to my delight, America seems to be discovering fine sake (not the hot stuff that every sushi restaurant has been serving since the early Eighties) at a fantastic rate. Apart from the dedicated and authentic Japanese restaurants that even years ago managed to import enough to serve their customers, it seems to me that fine sake first began gaining traction in luxury dining restaurants. I remember my surprise when I found some very nice sakes on the list at the French Laundry several years ago. From the upper echelons of dining, sake has spread to nearly every sort of moderately upscale restaurant, and is also featured in many of the hippest new cocktails in lounges and bars across the country.

As appreciation for this fine brew has grown, it should come as no surprise that events like The Joy of Sake tasting will become more popular and more common. Put on by the International Sake Association in association with the Japan National Research Institute of Brewing, this event is the single largest sake tasting outside of Japan, and may well be the largest public sake tasting in the world.

Which is one reason we all should be glad it took place in the Moscone West convention center in San Francisco, rather than a cramped hotel ballroom somewhere. I have criticized this event in the past for its shoddy logistics and planning, and it pleases me to say that this year I can find nothing to criticize. The event went off without a hitch, and was a great way to spend a Thursday evening (New York readers take note, it’s coming your way soon).

Held in the third floor lobby of Moscone West, the event included hundreds of sakes available for tasting along with food booths offering everything from barbecued meats, to vegetarian (shojin) food, to sushi. A live DJ spun an eclectic Japanese-influenced mix in the background, while everyone sampled and snacked. The food was excellent and plentiful, and whether because of the layout or better planning (likely both) none of the purveyors were plagued by the long lines or running out of food which were some failings of previous year’s events.

The sakes on offer were simply fantastic. Nowhere else, including Japan, can an interested member of the public get an opportunity to sample so many high quality sakes as was possible at this event. In fact, there are far too many sakes for even a power taster like me.

For this reason I decided to taste the sakes that I’m most likely to buy and drink, and which represent the highest-end (but not always the best) products of the sake industry: the daiginjo sakes. I really enjoy the lighter floral and mineral flavors that typify many daiginjo sakes, rather than the richer, yeasty and fruity flavors that can be found in less refined sakes.

I tasted every single daiginjo sake on offer at the tasting, and my notes follow below. But before I get to my notes (and a special visual treat for those whose eyes may glaze over at all the sake names), here are a few facts that may help novices better understand the differences between sakes.

A sake can be classified as a daiginjo sake if it is made from rice kernels which have been polished to less than fifty percent of their original volume. For those wine geeks out there, think of this as some bizarre equivalent of the attraction to “low-yield vineyards.” The polishing (sanding, really) process removes the outer, rougher, chewier layers of the rice kernel and leaves only the “pure” inner kernel. By comparison, ginjo sakes (the next level down of ‘quality’ classification) are made from rice kernels milled down to at between fifty and sixty percent of their original size, while honzojo sake rice is milled to only between sixty and seventy percent of the original kernel size.

One of the confusing aspects of understanding sake classification involves the fact that in addition to the milling of the rice kernel, some sake also has a small amount of alcohol added as the final fermentation takes place (though this does not usually mean that the finished sake is higher in alcohol). The term junmai is used to refer to sakes that DO NOT have this alcohol added. Despite tasting a good amount of sake, I can still not reliably identify or align my taste preferences with the flavor characteristics resulting from the alcohol addition. I seem to like as many plain daiginjo sakes as much as I like junmai daiginjo sakes, and would never be able to identify the differences between them in a blind tasting.

I have followed the same listing format I use for wine with the sakes listed below. This means that the first word or words are the name of the producer, followed in quotes by the given name of the sake, if any, usually followed by the quality designation of junmai daiginjo or just plain daiginjo as given by the producer, and lastly the prefecture where the sake is brewed. Some of the names do not include the word “daiginjo” but they are still classified as such.

I have also indicated which sakes are not currently available for retail sale in the United States. Retail pricing for these sakes was not available to me. To find sakes for purchase online I recommend a search engine such as Wine Searcher.

Without further ado, here are my daiginjo sake tasting notes from the 2006 Joy of Sake Tasting.

ULTRA PREMIUM DAIGINJO
The highest-end of most sake producers’ lineup, ultra-premium daiginjo sakes are made from the finest stream water and from kernels of rice which have been polished down to forty percent or less of their original volume.

DAIGINJO
Daiginjo sakes are made very much like the ultra-premium daiginjos above, with the exception that they are made from kernels of rice which have been polished down to between fifty and forty percent or less of their original volume. That is to say, they have not been polished down enough to earn the “ultra-premium” designation.

Sakes with a score of 9.5
Aoki Shuzo “Kakurei” Daiginjo, Niigata

In addition to being delicious, sake is also beautiful. I’m endlessly fascinated by sake labels, mostly because I find Japanese brush script extremely beautiful. Sake labels, especially for the highest-end sakes such as these are often printed on handmade paper and can resemble works of art in themselves. Of course, like wine labels, they can also be silly, funny, and even kitschy. For those who may prefer a slightly more aesthetic way of experiencing the tasting, I present my Flickr gallery of 180 sake labels, Enjoy. 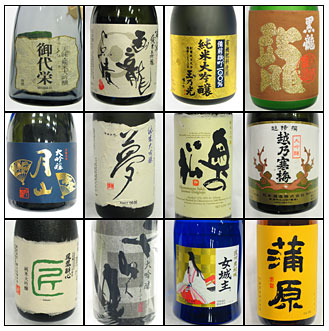