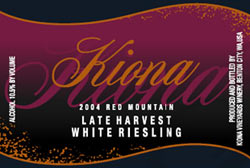 Frequent readers know that I’m not the greatest fan of dessert wines. Most sweet wines just don’t have enough acidity to keep me from feeling like I’m drinking syrup, and many are just too sweet for me to take. Even though I had a huge sweet tooth as a kid, these days it’s pretty easy for less than stellar dessert wine to push me into the zone where I feel like I ought to be taking insulin pills along with each sip.

Dessert wines, however, are certainly one of the wine world’s most hedonistic pleasures. When they are good, I love sipping them, crackling cold, and smelling them bloom as they warm to the touch of my hands on the glass. The aromatics of dessert wines are magical sometimes, which is how I ended up with half a case of this particular wine. The first time we had it, Ruth yanked on my sleeve and said (more or less), “I can’t believe this wine smells and tastes so much like jasmine! We need to buy some right away.”

I try my best to be a dutiful husband. It’s pretty tough when I gotta go out and buy good wine at the demands of my wife.

Kiona Vineyards was one of the wineries that put the Red Mountain appellation of Washington State (near the town of Walla Walla) on the map from a winemaking perspective. Kiona, which means “brown hills” in the Native American dialect common to the region, was established in the mid- to late 1970’s by John Williams and his business partner Jim Holmes, and had its inaugural vintage in 1980. They operated pretty much under the radar (with the exception of an occasional high score or medal in a competition or small publication) until the late 1990. Soon after, however, it became impossible to hide the fact that they were producing consistently top notch wines. In 2002, someone at Wine Spectator took notice and when some of their wines were included in the top 25 of that magazines 100 best wines of the year list, and Kiona rocketed from being the winery that only a few had heard of, to the Washington State cult producer everyone wanted to get a piece of.

In the more than 20 years of its operations, Kiona has gone from a small producer to being one of the area’s largest family owned wineries, producing upwards of 25,000 cases of over 11 different varietals annually. Areas of primary focus include Cabernet, Merlot, Syrah, Chardonnay, Riesling, and an extremely limited and sought-after Chenin-Blanc-based ice wine. Scott Williams, the founder’s son, now serves as winemaker and vineyard manager. Remarkably (and admirably) as production levels have climbed, the winery continues to make extremely high quality wines using essentially the same techniques they used for their first 500 case vintage.

This wine is made in small quantities (about 2400 cases) each year from select blocks of Riesling fruit that are left on the vine to shrivel — water evaporating and sugars concentrating in the grapes — before being made into wine.

Tasting Notes:
Pale gold in the glass, this wine has a spicy nose of honeysuckle and jasmine, mixed with light peach aromas. In the mouth it is thick and sexy on the tongue, coating the mouth with taut honey and jasmine flavors that are grounded by (surprising) minerality. The acids in the wine keep it bright and juicy as it heads for a fantastic finish. Like the best dessert wines, this is candidate for what the mythical taste of ambrosia might be like.

Food Pairing:
This is a lovely alternative to a Sauternes for a pairing with grilled foie gras and accompaniments.