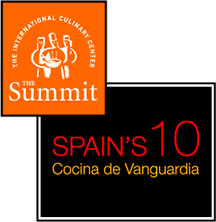 The last time I was in Spain I didn’t know squat about food and wine. I was a poor, backpacking college student who was content to eat empanadas for each meal and splurge once a week on a plate of paella. Ah, the mis-spent hours of youth. I think I had a few glasses of wine there, but I’m sure they were awful. Even back in the early Nineties, Spain was coming into its own excellence as a food and wine destination. These days, of course, it is quite possibly THE center of modern culinary technique, due largely to Ferran Adria  and his restaurant El Bulli.

Every year in Madrid, Spain hosts an event called Fusion, which is a summit attended by many of the world’s leading edge chefs, those who aspire to be, and those who aspire to just eat their food and learn about what they are doing. The problem with Fusion, and with with Spain, for most of us, is that it’s just so far away. If we lived in Paris we could just nip down there…but alas, it’s a bit more of an investment.

Which is why this event posting is particularly exciting. You know what they say about Mohammed an the Mountain? Or was it Moses and the Mountain? Anyway, Spain is coming to New York on Thursday.

Specifically, 10 of Spain’s top chefs, including Ferran Adria , will be in New York as part of a three-day-long program of presentations, classes, and, of course, eating. The weekend kicks off with a gala dinner and auction to benefit the James Beard Foundation on Thursday night. On Friday the Thirteenth, a group of invitation-only guests (I guess you know who you are) begins the summit with lunch and a ribbon cutting ceremony for the new building that will house the French Culinary Institute. Saturday is when members of the public like us can attend cooking demonstrations, a tapas lunch featuring dishes from all the chefs, a wine seminar and more.

If I was living in New York, I’d definitely be going, as my next trip to Spain may be a couple years away.

Tickets are $300 for the Saturday event, or $375 if you want to attend the wine seminar as well. Gala dinner tickets are $750 for members of the James Beard Association, $1000 for non members. All tickets are available for purchase online at the event web site.