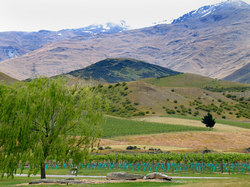 Ruth and I have (sadly) returned from New Zealand — a little sunburned, a little heavier, and with an aching desire to return. And not just for the wine. But since that’s what we’re here to talk about, then let’s talk. The first of three regions we visited was Central Otago, on the South Island which is busy making a name for itself growing Pinot Noir. We spent a stormy, rainy, very cold day tramping around the vineyards of the area and we left with a very good sense of what the region is doing when it comes to Pinot — making lots of it, some of which is extremely good, though definitely in its own style. The Pinots of this region are dark and brooding. The best of them are balanced between the rich plummy fruit that the area clearly generates and an herbal character more common in Burgundy. The worst of them taste like Merlot.

I’ve still got a couple of producers to write up individually from this region, but in the meantime here are samplings of other wines from some of the better wineries in the region. Remember, 2004 and 2005 were pretty tough vintages for Pinot Noir in New Zealand in general, but in particular on the South Island, which has the most extreme weather of anywhere in New Zealand. It shows extreme talent to have made a great Pinot in 2004, and a lot of luck (in addition to skill) to have made an excellent one in 2005.

CENTRAL OTAGO
“Central,” as locals call it, is one of New Zealand’s newest wine regions. The “oldest” producers started making wine in the early 1990’s. A large region on the South Island that actually has (at least) three distinct sub-regions (Gibbston Valley, Bannockburn, and Cromwell Basin) it is most well known for Pinot Noir, which it makes differently than anywhere else in the world — creating deep, rich, dark Pinots, thanks in part to some of the largest diurnal temperature shifts of any wine growing region in the world (sometimes going from over 100F/30C to below freezing at night. It also claims the title of the southernmost winegrowing region in the world (though there are folks in Patagonia, Argentina who argue otherwise).

2006 Mt. Difficulty Dry Riesling, Central Otago
Colorless in the glass, this wine has a nose that’s a dead ringer for key lime pie. In the mouth it offers very light lime flavors mixed with other citrus fruits and pear flavors knit together with enough acidity to keep it refreshing and lively, and crisp on the finish. 8.5/9

2006 Mt. Difficulty Rose of Pinot Noir, Central Otago
Light rose pink in color this wine has a very interesting nose of red berries and parchment paper. In the mouth it possesses nice balance and a substantial weight on the tongue that wraps flavors of strawberries. other indefinable fruits and wet wool around the palate before finishing crisp and dry with a hint of minerality. Yum. Why is it that more California producers can’t make a decent rose like this? 9

2006 Mt. Difficulty “Target Gully” Riesling, Bannockburn, Central Otago
Lacking any real color in the glass, this wine has a complex nose of mineral, floral, and candied lemon rind. On the palate it is a lovely balanced combination of pear and citrus and bracing minerality with the tiniest hint of residual sugar, but very little sweetness as it goes down beautifully. One of the better New Zealand Rieslings I’ve had. 9/9.5

2006 Mt. Difficulty Pinot Noir, Central Otago
Medium ruby in color, this wine has a classic cool-climate Pinot nose of pure cranberry fruit. In the mouth it is well balanced, if a tiny bit thin, with primary flavors of spicy pepper, soft cranberry fruit and barely perceptible tannins with a small hint of earthiness. Not a profound, but certainly pleasurable. 8.5/9

2006 Carrick Vin Gris of Pinot Noir, Central Otago
Bright salmon colored in the glass, this wine has an intoxicating nose of of hibiscus and deep complex mineral aromas. In the mouth it is perfectly balanced, with the poise of of a primadonna, both at once substantial and ethereal. The flavors comprise a shifting spectrum between rosehips, orange peel, cranberries, and the fresh tastes of rainwater and wet river stones. Totally sexy and disarming, this wine should convince any doubter that pink wines have a place in the most discerning of wine lovers’ cellars. 9.5

2006 Carrick Pinot Gris, Central Otago
Colorless in the glass, this wine has a lovely pear and linalool (think Jucyfruit gum) scented nose that you can smell several feet from the glass. In the mouth it is crisp and well balanced with a great, stony minerality that wraps around a core of pear flavors with hints of lychee on the finish. 9

2004 Carrick “EBM” Chardonnay, Central Otago
Light green-gold in color, this wine has a nose equally distributed between mineral aromas and the classic vanilla and buttercream aromas of new French oak. In the mouth it has a great, silky smooth texture and nice weight on the palate with flavors that oscillate between minerality and lemon zest. Good finish. 9

2004 Akarua “The Gullies” Pinot Noir, Central Otago
Medium ruby in the glass, this wine has a bright, high-toned nose of dried herbs and red fruit that leans towards redcurrant. On the palate it is well composed with flavors of cranberry and raspberry tinged with a faint spiciness that flirts with the edge of green, but never crosses over, even in the modest finish. 9

2004 Akarua Estate Pinot Noir, Central Otago
Medium ruby in color, this wine has a rich nose with aromas of soy dominant over its red fruit character. In the mouth those aromas translate into a trace of savory gameyness amidst the raspberry and more tart rhubarb compote flavors that end up being the final, lingering tastes on the palate. 9

2004 Quartz Reef Pinot Noir, Central Otago
Medium garnet in the glass, this wine has a strongly herbal nose of mixed dried and fresh herbs. In the mouth it has lovely balance and great acidity that offer up cranberry and pomegranate flavors with notes of herbaceousness that swirl and dance on the tongue through a very nice, long finish. A great effort for a difficult vintage. 9/9.5

2005 Quartz Reef Pinot Noir, Central Otago
Dark garnet in color, this wine has a dark, rich nose of wet earth and damp leaves. In the mouth it is deep and resonant, though not at the sake of balance and character. Good acids and very light, nearly imperceptible tannins underlie flavors of pomegranate with hints of sour plum and an overall spiciness that definitely asks you to take another sip, right through the lovely finish. Again, considering the tough vintage, an excellent wine. 9/9.5

2006 Rockburn Sauvignon Blanc, Central Otago
Colorless in the glass, this wine has a nice nose that artfully combines grassy aromas with a core of gooseberry fruit. In the mouth it has a lovely mineral character amidst its racy acidity that turns towards citrus as other grass and herbal elements enter towards a finish that is surprisingly long for a Sauvignon Blanc. 9

2006 Rockburn Riesling, Central Otago
Nearly crystal-clear in the glass, this wine has a bright heavily floral nose that leans towards perfumed. In the mouth it is luscious with juicy pear and apple fruit and a touch of minerality that makes this more complex than a lot of the Rieslings from the area. Crisp, zingy, and engaging. 9/9.5

2005 Rockburn Pinot Noir, Central Otago
Medium garnet in color, this wine has an alluring nose that combines floral aromas with cranberry and rhubarb scents. In the mouth it is herbal and spicy in character with a nice texture and full flavors of redcurrant and raspberry that mix seamlessly with the herbal notes for a very pleasing finish. 9

2004 Valli Vineyards Pinot Noir, Bannockburn, Central Otago
Light ruby in the glass, this wine has a nose of tart rhubarb and raspberry aromas. In the mouth it is perky and alert with good acids and a Burgundian etherealness and a silky, sexy texture that carries flavors of pomegranate and dried herbs into a joyous finish. Lovely, especially considering the wretched conditions of its vintage. 9/9.5

2005 Valli Vineyards Pinot Noir, Gibbston Valley, Central Otago
Light blood red in color, this wine has a mysterious nose of wet stone, violets, and tart raspberry aromas. On the palate it is firm and supple, with flavors of raspberry, rhubarb and light herbal qualities nicely balanced. A lovely finish, though not with the complexity and length of the 2004. 9

2006 Peregrine Sauvignon Blanc, Central Otago
Colorless in the glass, this wine has a classic nose of gooseberry and herbal aromas. In the mouth it is just as classical, offering a bright core of gooseberry fruit zapped with acidity and notes of green apple and unripe pear that all crisply and refreshingly finish clean. 8.5/9

2005 Peregrine Pinot Noir, Central Otago
Dark ruby in color, this wine has an almost sweet nose of dark plum fruit with notes of spice. In the mouth the wine is not as heavy as the nose might have promised, with a nice medium body of mixed cranberry, raspberry, and redcurrant flavors with bits of dried herb on the finish. 8.5/9