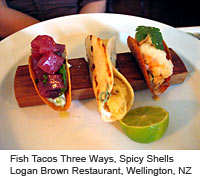 Some readers have asked about the food and restaurants in New Zealand, and really there’s only one, maybe two restaurants we ate at that I’d bother reviewing, so I’ll just do a little post here and sum things up.

OVERALL IMPRESSIONS
The quality of ingredients at top dining destinations in New Zealand is very high, though most of the ingredients are local and don’t involve any expensive stuff flown in from elsewhere for the sake of culinary art, with the exception of some Japanese products like tobiko, etc. In general the meats (in particular venison and lamb) were fantastic, and the seafood was just OK (we were expecting better). In particular, it was surprising to find no local trout on any menus (I caught more than a dozen gorgeous, large rainbows in a day’s fishing that any restaurant in SF would have been drooling to get its hands on) and only a select few fish other than Red Snapper which was apparently in season, appeared on most menus.

The wine lists were generally crappy and limited compared to American and European standards (not many wines, from not many regions, and only the most recent, and henceforth not so great, vintages).

Service and atmosphere were generally very casual, especially in wine country, which is to be expected.

There is no fine dining experience (at least that we were able to find) that even starts to approach the top end of fine dining in the US or Europe, or even Australia for that matter. Logan Brown, below, was the closest, but it was solidly “upper middle,” not top tier by any means. Logan Brown, along with a few other of the restaurants listed below, is doing some very good cooking that is creative and inspired and high quality. But as far as we can tell, New Zealand has no Tetsuya’s (or Jean Georges, or Fat Duck, or L’Arpege, etc. etc.) of their own yet.

RECOMMENDED RESTAURANTS:
Based on our experiences we would recommend the following in order of preference, satisfaction, and overall quality of the dining:

Te Awa Winery Restaurant, Hawkes Bay — good meal, beautiful setting, kind of crummy service, but could have just been the day we were there. Only Te Awa wines available, which is a shame.

The above comments may inspire protest and recommendations, but I welcome both.