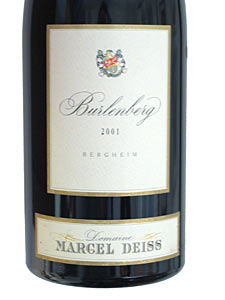 Alsace, the oft-contested and much-coveted skinny strip of land between northeastern France and its neighbor Germany is an odd and unique place. Like several other such zones around the world, it has been a part of so many different countries and empires that it enjoys a sort of twilight zone atmosphere, where place names reflect one language, spoken words another, and family histories often both or none of the above.

Alsace is also a unique landscape sculpted by both rivers and volcanic events, but bearing the unmistakable and essential traces of a more ancient geological past as the bottom of a wide ocean. It is no wonder that the wines of this region are like nowhere else on earth, and it is no wonder that the winemakers of this region are some of the most unique characters in the world of wine.

Deiss is quite possibly at once both the “essential” Alsatian winemaker, for his tireless advocacy of the region’s potential and the incredible quality of his wines, and yet also the black sheep of the region, who never quite does things the way anyone else does or thinks they should be done. He’s just sort of troublemaker I enjoy and is a magnet for criticism over any number of different things.

Alsace is one of the few regions of France where it is not only legal but also tradition that wines be produced primarily as single varietals and labeled as such (as opposed to being labeled by vineyard and appellation as elsewhere in the country). It is the only region in France where you will see a Grand Cru designation alongside the name of a grape variety. Deiss, however, believes firmly in that vineyard expression trumps varietal expression, and has raised furors for years over his decision to label single varietal wines only with the names of his vineyards, as well as his tendency to produce field blends of multiple varieties that are sold with only the name of the vineyard on the label. Only in 2005 did the French government finally come around to Deiss’ way of thinking and permit such wines to be labeled as individual vineyard sites and to carry the designation of Grand Cru, though most of his neighbors still scoff at the idea.

Deiss is also a fervent devotee of biodynamic viticulture, a fact which, these days, is one of the few things he has in common with many of his neighbors. The domaine has been fully biodynamic since 1997, and was farmed organically for the 20 years prior to that. While biodynamic viticulture is quite a leap for some winemakers, especially when it comes to its more spiritual practices, Deiss has long had a spiritual sense of his winemaking and winegrowing. He has been known to claim that one of the main reasons he does field blends of grapes like Muscat, Riesling, Pinot Gris, and Gewurztraminer is that in his vineyards they all ripen simultaneously (which, if true, would be quite unusual).

Presumably, if God makes them ripen all at once, then why not make wine with them?

The Deiss estate’s 67 acres contains several Grand Cru designated vineyards planted primarily with Riesling, Gewurztraminer and Pinot Gris, plus smaller amounts of many other varietals including several more members of the Pinot family as well as others. All the vineyards are planted with a vine density of sometimes more than 4050 plants per acre. Perhaps not surprisingly in keeping with this low-vigor, high-stress planting, the vines are pruned severely and yields are restricted to levels that are generally less than half of the average yield in the region.

This wine is a field blend of Pinot Noir and Pinot Gris (Pinot Beurot as Deiss refers to it) from a vineyard named Burlenberg in the town of Bergheim. This is a vineyard with a very hard, fractured limestone base of thin, powdery yellow soil that is extremely fast draining and extremely infertile — perfect for Pinot Noir, according to Deiss.

Like most of his field blend wines, this was fermented solely with native yeasts slowly in wooden casks over a period of four to six weeks. Most of his wines (though I’m not sure about this one) are kept from going through a secondary fermentation and age on their lees for six to eight months before a single racking (pouring the wine off the settled sediment) and are bottled unfined and unfiltered.

Tasting Notes:
Medium ruby in the glass with hints of orange on the rim, this wine has a deep, bottomless nose of rich dark cranberry and plum fruit with notes of caramel, smoked meats, and dried herbs. Over time, the aromas shift towards roasted soybeans and red miso with a core of raspberry fruit. In the mouth it is soft and comfortable, like a favorite blanket or sweater, with a lovely texture and weight on the tongue, good acids, and flavors of sour plum, cranberry, dried herbs, and the lightest hint of green tannins that add a complex and slightly chewy note to the expansive, lingering finish. Astonishingly good, considering how little tradition of Pinot Noir growing exists in Alsace.

Food Pairing:
I think this wine would be a lovely accompaniment to a spiced pork loin over celery root puree.