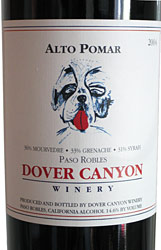 Dover Canyon Winery in Paso Robles is the deliberately small creation of Dan Panico and Mary Baker, who have crafted it into a disarmingly down-to-earth winery that seems to embody everything that makes winery ownership such a dream for so many people. After two solid careers in the wine industry — Dan as winemaker for Eberle Winery, and Mary as a tasting room, hospitality, and business manager for Wild Horse and Justin Winery among others — they stumbled on an opportunity to start their own winery.

Opportunity came in the form of a small parcel of land in the northwest part of the Paso Robles appellation. A walnut orchard, a seven acre vineyard site and a couple of old barns that, together, looked a bit too much like heaven for Dan and Mary to pass up. A couple of bulging credit cards, a flushing sound from their savings accounts, and two small loans from family members, and Dover Canyon winery was born. Well technically, one would have to say that it was at this point that Dover Canyon winery finally had a permanent home.

The Dover Canyon label actually started back in 1992 when Dan began making his own wine for fun with the friend who would go on to paint the surreal portrait of Dan’s dog, Blue, that graces the Dover Canyon wine label. Inspired by the topology of Dover Canyon, a valley which cuts through the hills of northwest Paso Robles and acts a vacuum for cooler sea air, Dan began purchasing contract grapes in small quantities from select producers to make small lots of wine.

Dover Canyon grew up a little in 1996 when the operation moved into a leased winery space offered by a friend, and it has now settled into a timeless permanence on the Dover Canyon farm, just off of Vineyard Lane. I nearly referred to it as the Dover Canyon estate, which would have been a qualitative and philosophical mistake of the highest order. While the old farmhouse is sometimes mistaken for a quaint B&B, Dover Canyon is, and will always be, a family farm, just big enough for two people and a dog to work comfortably. Which is precisely what they do.

Dogs have a special place in the heart of Dover Canyon Winery, perhaps none more so than Blue, the Saint Bernard who was a childhood companion to Dan and who saved him from drowning in a surfing accident at one point in his life. Blue is memorialized on the wine label, and also in the doggish sense of humor that plays across some of the names of the Dover Canyon wines: “Bone Lore,” “White Bone,” and “Cujo” among them. This sort of playfulness seems endemic at Dover Canyon — as if every aspect of the winery proudly boasts that wine is far too precious and intimate a thing to be taken too seriously. Dan and Mary have decided, staunchly, to keep their winery from ever becoming something that doesn’t feel like a family farm, even to the point of making virtually no improvements to the two “wine barns” on their property — visitors taste wines standing at the same rough hewn workbench that used to hold horse tack and bailing wire. They’ve even crafted what can only be described as a manifesto about what “small” means to them on their very well written blog. If you want to know what makes small wineries so special, I’ve come across few such articulate explanations as theirs.

Dan and Mary make about 2500 cases of wine from their seven acre, organically farmed vineyard, as well as from fruit purchased from other sustainably farmed vineyard sites in Paso Robles. Their home (not estate!) winery, which they like to point out is also a registered nature preserve, yields vineyard designated Zinfandel and Syrah. Other wines in their portfolio include a Viognier, a Roussanne, a white blend, as well as several red Rhone blends, including this wine, which is a blend of 36% Mourvedre, 33% Grenache, and 31% Syrah.

Hand harvested, punched down by hand (both Dan’s and Mary’s) and aged for 20 months in mostly neutral French and American oak, only 150 cases were made. Not very much, but if you ask Dan or Mary, they’re probably liable to tell you that it’s just about the right amount for them to drink some and for their friends to buy some too.

Tasting Notes:
Dark garnet in the glass, this wine has a funky, distinctive nose of aromas that bounce between old socks, barnyard, and saddle leather. In the mouth it is smooth on the tongue with juicy flavors that have the spiciness of sandalwood incense and a plummy fruit quality that morphs to cassis as the wine heads towards a nice finish. This is an individualistic wine with something to say, and most will find the conversation very pleasing. I’d be particularly interested in seeing how this wine ages.

Food Pairing:
I’d love to drink this wine with pulled pork on arepas as in this recipe, but probably with caramelized onions instead of picked onions..