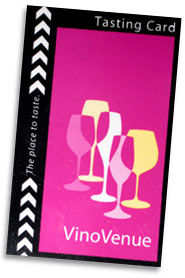 After living in Japan for a couple of years I’ve remained convinced that a lot more things should be sold through vending machines. Over there you can buy just about everything out of a vending machine, from breakfast to deodorant to batteries to beer. I even saw sake being sold in vending machines. Here in San Francisco we seem to like a more human touch. But if you’re interested in mixing your technology with your wine, then there’s no better place to go than VinoVenue, the high tech tasting bar that sits on the hip of the Financial District, just down the block from the Museum of Modern art.

VinoVenue is unique in San Francisco for its offering of a tasting room run by automat — self-serve machines that dispense wine in roughly one ounce pours to customers wielding smart cards. It’s quite an ingenious system. Each bottle sits on a pressurized pad that pushes the open bottle up into the machine to form an airtight seal. Then down into the bottle snake two tubes, one long, one short. The long one goes to the bottom of the bottle to suck out the wine, while the short one fills the bottle with more inert gas (usually argon gas). This system severely retards the oxidizing process and lets an open bottle keep for a week or two, especially when it is a white wine (which sit in special dispensers that also serve as refrigeration units). Initially I had my doubts about these dispensers and their ability to keep wine fresh as well as to avoid tainting flavors with plastic tubes, etc. But among the scores of wines I’ve tried there, I have to say I’ve only once had a wine that I thought was off, and the staff agreed and immediately replaced it.

Curious tasters purchase smart cards in any denomination they choose and can wander around getting tastes of whatever wines they like at prices that run from a quite reasonable $2 (for a Gruner Veltliner), to a significantly 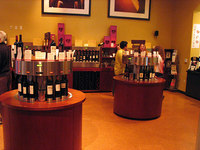 steep-but-often-worth-it $25 (for a Second Growth Bordeaux or Sauternes). Incredibly, the bar offers nearly 100 wines in this fashion, from all over the world. The offerings seem to change regularly, and are often grouped thematically — “Pinot Around the World” or “Off the Beaten Track” or “Cabernet is King,” etc. Usually about 65 reds and about 30 whites are on offer, as well as a special unit of high end wines that typically include several high-end Napa reds, a Bordeaux or three, and occasionally a white or red Burgundy.

Patrons enter the bar from Mission street where they are greeted by someone behind a counter who can sell them a card and hand them a glass to begin tasting immediately. The machines are large round kiosks holding about 18 wines apiece. They display the price of the wines on an LED screen, and the staff has usually also affixed paper tasting notes about many of the wines next to each bottle.

Tasting is done standing up and around these kiosks or patrons can retreat to a few high or low tables with stools near the bar (which serves a selection of wines by the full glass and a few beers for those not interested in the self-serve model of wine tasting). This arrangement, of course, is the main problem with the venue. It’s just not 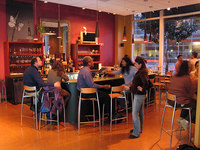 very comfortable. The bar is nice to sit at, as nice as any bar is, but the other seating options are pretty austere and not at all conducive to hanging out with friends.

The atmosphere is not helped much by the somewhat clinical polished clay floor and the floor plan which was designed to feature the wine machines and the bar to the detriment of seating options. While the space is large and can accommodate a lot of standing patrons, there really are only seats for about 30. The net of all this is that VinoVenue is a great place to go and learn about wine by tasting through one of the best by-the-glass wine lists in the city at very affordable prices, but it’s not some place you really want to stay for very long. As a result the “scene” if it can be said to have one is somewhat a strange mixture of tourists wandering in off the street and post-work tech and financial folks who have decided not to go to the Thirsty Bear.

For those who do find a seat and decide to linger, small nibbles of food like cheese and olives are available at the bar. The folks behind the bar and wandering around the tasting floor are generally well informed if not actually knowledgeable about the wines. Some of the folks I’ve interacted with there are very passionate about wine and know their stuff quite well. Others are less so. It’s a challenge for anyone getting paid a basic hourly wage to be familiar enough with 100 wines enough to correctly guide you through the list, so some level of personal initiative is always warranted.

For those with the initiative, or with an hour to kill and a desire to learn about wine by tasting a bunch VinoVenue offers a unique resource in San Francisco.

It’s worth noting that the company was recently purchased by Brunton Vineyard Holdings, a wine company owned by Geno Brunton, an entrepreneur who apparently got his start in the entertainment business. As part of the acquisition Brunton stated his plans to take the VinoVenue brand national, opening stores in several states, though staff in San Francisco didn’t know much about any other plans. Some hinted that there had been talk of remodeling the San Francisco store to make it a more comfy environment, something which sounds promising indeed.

Street parking in the area is non-existent, but local garages on Third Street and on Mission at 4th Street are convenient options.

Suggested dress is casual. No on under 21 admitted.