It seems to me that as people get older, especially those who we might consider accomplished and successful, they might feel a bit more license to lighten up or to stir the pot, having already proven themselves a bit to the world. I certainly plan on being a bit more frivolous, eccentric, and quirky if I can afford to in my old age.

Napa is filled with a generation of winemakers that could easily rest on their laurels. Over the past thirty years, this group of men and women have created an industry, and most have made their own fortunes. Rather than fade into the shadows of the next generation, many of these winemakers are striking out in new directions, prompting me to coin a new bumper sticker: “Old winemakers never die. They just keep fermenting.”

By all accounts, Carl Doumani has nothing to prove. The founder and original owner of Stags’ Leap Winery nearly 35 years ago, Doumani has not just been around the block, he was there before the streets were paved. In those days Napa valley was such a small community that when Robert Mondavi wanted to buy some of Carl’s grapes, he just showed up one day and knocked on the door. Doumani didn’t know who he was, but agreed.

Even before selling Stags’ Leap to Beringer in 1997 for a hefty sum, Doumani had begun planning his own personal winery with a bit of a twinkle in his eye. He had no desire to create another Stags’ Leap, and instead envisioned a winery that would exemplify his interest in architecture, art, and natural form. Six years later he had a winery that looked nothing like he ever imagined, and everything he could have dreamed.

Quixote Winery began with a disappointing architect. I can imagine Doumani’s big, stone-mason-like hands gesturing as he tried to convey a concept to the architect he had hired to do some sketches of his new winery. Doumani is an articulate guy, but architecture is famously difficult to capture in words. For whatever reason the architect wasn’t getting the picture. In one of his last disappointing interviews with the never-to-be architect, he happened to notice a calendar on the wall featuring images of sculpture unlike any he had ever seen, sculpture that perfectly captured the spirit that he wanted from his building.

The calendar celebrated the work of the Austrian artist Friedensreich Hundertwasser, a man that Doumani would spend years trying to find out how to get in touch with, and still many more months trying to convince that designing a winery for him was a good way to spend his time. What Doumani didn’t know was that once Hundertwasser agreed, it would still be many more years before the winery was complete. Without relaying the whole saga, suffice it to say that Hundertwasser was a great, but easily distractible mind.

The finished product, however, is unlike any building Napa has ever seen. Architecturally its closest relatives (and indeed, direct stylistic influences on Hundertwasser) are the fantastical works of Antoni Gaudi, the virtues and fantasies of which which any Barcelona tourist can extol. Trees and grasses grow out of the roof, no two windows are the same size or shape, not a single right angle exists anywhere in the building, and Carl Doumani is one happy camper.

When Doumani hired Hundertwasser, he expected to get an architect. What he got instead was more of a winery with a patron saint — someone whose philosophies are expressed not just in the physical structure of the building, but in the wineries whole orientation to the world. Partially because of Hundertwasser, Quixote Winery is growing its grapes organically, and the environmental footprint of the winery, from water usage to heating costs is intentionally low. And perhaps most importantly (though the winery owes this as much to Doumani as it does to Hundertwasser), the winery is simply fun.

Quixote winery is a welcome reprieve from the seriousness with which most Napa enterprises approach the world. From the wacky labels, to the walkway up front that is intentionally off-kilter, to the wildly colorful and 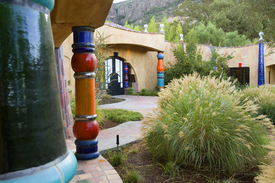 massively expensive Italian ceramic tiles (that Hundertwasser miraculously received intact after a long ocean voyage and promptly smashed with a hammer to show that perfection was not his goal), Quixote manages to be the proper Napa incarnation of its literary namesake.

If there is one aspect of the winery that is not off tilting at windmills, it is certainly the winemaking, that progresses with deliberation and care under the watchful hands and eyes of Mario Monticelli, a UC Davis educated winemaker who consults on several small labels in the valley in addition to his full time gig at Quixote.

The winery produces around 3000 cases (and will eventually top out at around 5000) of Cabernet and Petite Sirah in 4 bottlings, two of each varietal. The lower priced wines are named Panza, after Sancho Panza, Don Quixote’s ineffable sidekick, and the top wines bear the name Quixote.

With the gravitas of a grizzled veteran, Doumani will tell you that in this age of consolidation, the real future of Napa lies in small wineries — wineries who are not afraid to do things a little differently. Gazing out from his office windows at what seems to be a perfect little ecosystem of oak trees and vines in the shadow of a golden dome of some post-cubist, semi-surreal architectural fantasy, that’s pretty easy to believe.

Tasting Notes:
Opaque purple in the glass with the density of ink, this wine has a tantalizing nose of smoke and black licorice aromas. In the mouth it possesses fantastic texture, slipping down the tongue with flavors of cassis, blueberry and damp earth. These flavors are supported with a skeletal structure of light, grippy tannins that propel the wine to a very nice finish.

Food Pairing:
There’s something about this wine that just cries out for Morcilla, traditional Spanish blood sausage, grilled with onions.

This wine has not yet been released, however the 2003 vintage is available for purchase on the Internet, and is also quite good.