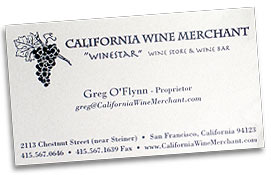 Even though it has only been open for a couple of years in its current location, the Winestar wine bar has quite a history in San Francisco. This combination wine bar and retail shop was recently reborn from the California Wine Merchant, which, when it closed in 2005, was literally a San Francisco institution. Tucked into a cozy (if a bit dark) little shop half a block off of Chestnut Street in the Marina district, the California Wine Merchant first opened in 1974, and for thirty years it sold wines to local residents.

Perhaps the weight of so much wine and time was too much for the floorboards, or real estate prices finally got too high, but in any case a few years ago the building that housed the store was scheduled for demolition. Owner Greg O’Flynn, seeing crisis as opportunity, decided to reinvent the store as a wine bar and wine shop combo, found a failing watering hole just around the corner from the original shop, and never looked back.

Now a couple of years later, the Winestar bar is a popular after-work stop for Marina denizens, and an easy place to pick up a decent bottle for dinner, unless it’s happy hour, in which case it’s not an easy place to buy either a bottle or a glass of wine, unless you happen to be one of the lucky souls that has a seat at the bar. Winestar is a narrow space, with a bar that seats about 16 people, plus a front window table that can squeeze three or four into it. After that it’s standing room only, and it seems that most nights, that room is surprisingly full. I swung by a few weeks ago on a Monday night and was hardly even able to get in the door.

Winestar is an unpretentious place to grab a glass of wine — it looks and feels like a bar, and attracts a bar scene. It can get pretty loud, and people stack up 2 deep sometimes with glasses in hand, while the bartenders race back 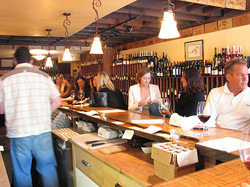 and forth filling pours and trying their best to answer patrons’ questions about the wine. When the owners or managers are behind the bar, those questions are answered expertly and with a lot of knowledge about the wines, but some other staff are less than knowledgeable.

With a name like California Wine Merchant, there’s little doubt about the focus of the wine list, which offers 15-20 whites and the same number of reds by the glass or by the 2.5 ounce taste. In addition to their regular list (which they claim changes daily, but in reality seems to have lots of “standards” and a few new wines each week) the bar also offers something they have named “Last Call” which is a list of roughly ten single bottles that are opened each night and poured (again, by the glass or the taste) until they runs out. These wines seem to be completely different each time I stop in, and often include very nice wines that normally retail in the $30 to $50 range.

The wines on offer range from somewhat pedestrian, mass produced wines, to small producers that are much less common and are far more interesting. Not exclusively Californian, the list also includes an occasionally New Zealand Sauvignon Blanc, an Australian Shiraz, or a German Riesling. I’m always pleased when they stray off the beaten path, which they do every once in a while. On a recent visit they were pouring a sparking wine from New Mexico, for instance. Additionally, they also seem to make an effort to put a few higher end wines on the list that will run $20 or so per glass, instead of the usual $8 – $11. For those not interested in wine there are a couple of beers on offer as well.

Because it’s a wine store, it’s also possible to order a bottle, though they’ll charge you an additional $15 above retail to open it in the bar — a steal compared with markups in restaurants, but sort of funny considering there’s no food to drink it with, really. OK, I lied, there is SOME food, though that consists only of a cheese plate (with one type of cheese and bread and olives and nuts) or some chocolates.

In general, I find Winestar a bit cramped, and a bit too much like a bar for my taste, but I suppose if I were twenty-two and single, I’d be perched at one of their stools quite often, especially since the last few times I was in there the female to male ratio was about three to one.

No reservations taken or needed, though on Friday night you’ll wish you could make one. Dress is casual and parking, as usual in the Marina, is hard to come by.