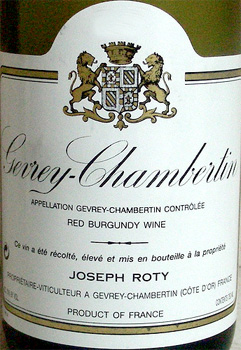 I’m a sucker for curmudgeons and iconoclasts in the world of wine. Perhaps these eccentric winemakers play into my romantic notions of the mystery of wine, which I pray never to lose despite my increasingly rational and commercial view of the wine industry. There’s just something seductive about a winemaker who does things his own way no matter what anyone says.

Joseph Roty’s family has been making wine in roughly the same spot in Burgundy for 11 generations, which means that they’ve had plenty of time to settle into their own ways of doing things. While some winemaking families can take credit for having lived in the same town for decades or even centuries, there are very few who can claim with credibility that they have been working the same vineyards for 300 years, as Roty can. With this sort of family history, it’s no surprise that he owns some of the oldest vines in his particular area of Burgundy, Gervrey-Chambertin and Marsannay. And when I say old, I mean really old. Roty makes one tiny production cuvee called appropriately, Charmes-Chambertin Très Vieilles Vignes ( lit. “really old vines”) from grapes off Pinot Noir vines planted around 1881.

Roty has been called a recluse, a madman, an “enfant terrible,” an eccentric, and a curmudgeon. He has a particular reputation for being exasperating and difficult among journalists (he never submits his wines for review or criticism from any critic, American or European), and another reputation for being tight lipped in the wine industry. For years, no one knew how many acres of vineyards he actually owned, and it is still unclear what his total production is each year (though undoubtedly small, as his three top cuvees are made in quantities of less than 100 cases apiece).

It probably comes as no surprise then, that Domaine Joseph Roty, which is now run day-to-day by his son Philippe does not have a web site, nor has it been really been profiled to any extent in the media. It is notoriously difficult to get into Roty’s cellar, let alone to get the man to tell you anything.

So we know little about his winemaking except what we can taste in the bottle and what we know of his vines, which are grown organically (“Agriculture Biologique”) and range in age from 25 to more than 100 years old.

Tasting Notes:
Medium garnet in color, this wine has a pungent nose of redcurrant, crushed fresh herbs, and juniper tree aromas. In the mouth it is supple and taut, drawn like a bowstring across soft velvety tannins, and resonant with flavors of earth, redcurrant, and the amazing flavors of garrigue, the French term for the wild herbs of Provence that perfume the hillsides and that perfume the finish of this wine long and lingering in the mouth. This wine would clearly age another ten years without even trying, but it has begun to drink beautifully at this point in time.

Food Pairing:
Mmmmm. Wabbit season. I’d love to drink this wine with a dish of braised rabbit and cracked olives over fresh pasta.