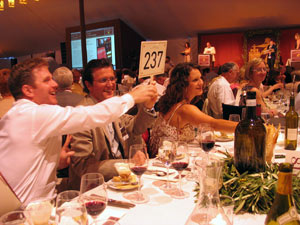 Napa Valley throws a blow out party once a year. It’s called Auction Napa Valley, and it’s a four day marathon of fun for a good cause. Put on by the Napa Valley Vintner’s association, “Auction,” as it is referred to has about as much mystique as Napa can muster. Which is to say that it doesn’t quite hold the public rapt and starry-eyed as much as The Oscars™, but it’s as close as most California wine lovers can get to the holy grail of wine parties without being given the keys to Robert Mondavi’s personal wine cellar.

This was my third year participating in Auction festivities, and my second year attending the full… spectacle of the event, shall we say, and I really do think it’s quite an extraordinary event. Certainly it is the most fun I have ever had at a charity event. Granted, I was attending courtesy of a press pass, and so didn’t have to fork over the $2500 per person to attend, but I’ve got to say, given the quality of the experience, it’s certainly worth the price.

Especially if you can find a way to write it off on your taxes.

Auction Napa Valley, should you be interested in attending everything on offer consists of parties at dozens of Napa wineries on Thursday night, of which attendees usually choose one to attend. These parties are casual affairs at which the wine flows constantly, and often library selections are on offer. The food (and the theme) are different at every party, and range from casual Hawaiian style barbeques to Jazzy lounge events.

Friday is taken up by two primary attractions, the barrel tasting and festival, which I reviewed last week, and what for many is the highlight of the auction: exclusive, intimate, and often quite lavish dinners thrown by many wineries in the valley. These events range in size from eight to ten guests to nearly fifty in size, and can be dinners in a winemakers home, or black tie formal balls in some of Napa’s finest wineries.

These dinners are nearly worth the ticket price alone, as they offer an opportunity to taste fantastic library wines (most hosts generously break out many vintages) and to meet all sorts of interesting fellow Auction attendees, that range from high powered executives to wine lovers who save up all year to celebrate their passion for wine. My experience holds that most of these folks have one thing in common: a genuine love of wine. And that makes them pretty easy to get along with.

Saturday offers another invitation-only wine hospitality event in the form of a luncheon somewhere in the Valley, and then the evening provides the main event, a live auction of jaw dropping combinations of wine, cars, jets, travel, and all things luxurious that this year ended up raising $9.8 Million dollars for local charities. The auction is usually emceed by some celebrity, and some of the auction packages include dinners with other celebrities, who are also usually in attendance.

This year’s stars were Dana Carvey, who performed a stand-up routine at the beginning of the auction that immediately veered in to dangerous territory with jokes about Nancy Pelosi — dangerous because her husband was sitting three feet from the stage — and Stacy Keibler, one of the dancers from the TV show Dance with The Stars.

The live auction is quite the spectacle of generosity and outlandishness — pushed partially by the ever escalating rivalry between the Napa Valley Auction and the Naples (Florida) Wine Auction, which seem to always be competing for the biggest and bestest and hugest auction ever. I’ve lost track of who’s on top these days, but it hardly matters. It’s all for a good cause.

This years jaw dropping auction lot was a tour of Italy with the folks from Staglin Family vineyards, complete with a Maserati (that the winning bidder gets to keep after the trip), first class airfare and Michelin three star meals included. The final price: $1.1 Million dollars.

For those who aren’t bidding, there’s plenty to do, especially if you like eating and drinking with likeminded revelers. Dinner is served by the competent staff at the Meadowood resort, and there is an endless supply of wine available. Finish a bottle and the servers put a new one on your table. Want to try another red? Just ask.

It’s very dangerous. And also a heck of a lot of fun.

This year, each table was hosted by a particular vintner, who provided a three liter bottle of their wine for the table guests. I had the fortune to sit at a table hosted by a brand new winery, and the three liter bottle was of the very first release of the wine, which is due to hit the market in the fall under the name PROMISE.

After the last auction lot has been sold, dancing goes on late into the evening under the stars and lamps hung from the trees on the golf course at Meadowood.

Those who are actually awake on Sunday morning can attend a farewell brunch and drink yet more wine should their livers cooperate.

There are several ways to do Auction Napa Valley. The first is to do it celebrity style, which involves private jet flights to Napa and limo service throughout the weekend, all of which can be arranged for you by the Vintners. If you can pull it off, this is a pretty nice way to spend the weekend.

Mere mortals, however, who are looking for a nice vacation, can also manage to have a great time without spending a fortune. If you’re interested in attending, here are some tips:

– Book your hotel a year in advance (i.e. now) and stay at someplace reasonably priced.
– Buy your airline tickets several months in advance (Jet Blue to Oakland? CHEAP!).
– Rent a car and draw straws for designated driver privileges each day
– Watch others bid on auction lots while you just sit back and enjoy the food and wine.

Even with these tips, the weekend is not inexpensive, but if you can afford it, it’s a darn good time, and funds some charities that are doing excellent work for the local communities. See you next year!

I hope my dinner companions will forgive me for using this photo of them having a good time.