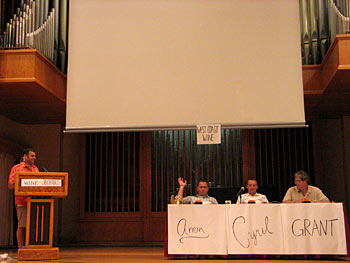 DAY ONE (continued): The afternoon of day one at the 2007 International Pinot Noir Celebration in McMinnville, Oregon offered attendees (those who weren’t busy napping off their sumptuous lunches) an opportunity to choose their own adventure, of sorts.

Some attendees explored the effects of vine age on Pinot noir, with matched wines from several wineries, made from fruit grown on vines of wildly different ages, some as young as three or four years old, some as old as thirty years.

For those interested in more of the technical aspects of wine, there was the Pinot Lab, an opportunity to explore the components of pinot noir from a winemaking perspective, and to experiment with ways that various elements of wine contribute to the final tasting experience. Some may be familiar with the concept of alcohol sweet spot tasting, which helps highlight the effects of alcohol percentage on the final wine. As part of the Pinot Lab, participants got to change the alcohol levels of a pinot noir in .25% increments starting at 13.75% all the way up to 15.5%.

In addition to alcohol, however, the lab also offered a very unique opportunity to experience the difference between grape tannins (from seeds and stems and skins) and wood tannins from barrels via tastes of tannin extract solutions, as well as by adding these to a base Pinot Noir wine fermented in steel.

The opportunity to do the same thing with acid and sugar were also available, each of us getting the opportunity to gradually change the acidity of our base wine, as well as the residual sugar level in tiny increments. For me the experience was not only an exercise in understanding how each of these components changed the experience of tasting these wines, but also to understand my own thresholds for perceiving each of these elements, which varied considerably from one to the other, as well as with other people. For instance, the first addition of .1gram per liter of residual sugar was completely imperceptible to me, except perhaps slightly in the texture of the wine, but I tasted no distinct addition of sweetness. Likewise my perception of acidity in the wine was less marked than my perception of how the acidity changed my perception of the alcohol and the tannin in the wine.

And then for those who were interested in a little lighthearted entertainment instead of education, there was Wine Jeopardy.

Complete with sound effects and buzzers, a full game of jeopardy was on offer, pitting winemakers Grant Taylor of Valli Vineyards in New Zealand, Cyril Audoin of Domaine Charles Audoin in Burgundy, and Arron Bell of Domaine Druohin.

Of course, the host was drinking a glass of rose and didn’t know most of the rules, the research team who came

up with the questions was in the back heckling drunk the whole time, and the audience got to answer the questions that the contestants could not.

The categories for the day were Potent Potables, Famous Names, The Science of Wine, West Coast Wine, The Southern Hemisphere, and France. The questions ranged from the somewhat obscure to the silly, and between the charmingly stumbling host, the inopportune mistakes of the contestants, and the rowdy crowd, it was the best, the worst, and (we have been guaranteed) the last episode of wine jeopardy to be played at the IPNC.

Highlights from the game included:

Were it not for an instant double jeopardy, and all the winemakers getting 600 points when someone correctly answered that beer was indeed every winemakers favorite beverage during harvest, the audience might have actually won the game (if that were allowed — no one was really clear on the rules we were playing by). Instead Cyril Audoin took the game in Final Jeopardy by incorrectly guessing the total number of countries that have ever participated in the IPNC event (the real number is 14) but wagering none of his winnings on the answer.

The afternoon’s activities were followed by a walk around tasting of wines and a phenomenal grand dinner in the evening, both of which I will cover in subsequent posts.