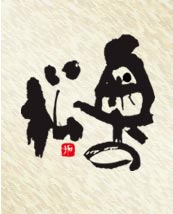 Here’s what happened: I went to Japan, drank a bunch of sake and took notes. Then I went to the Joy of Sake event; ditto. The idea, beyond maintaining a rice buzz, was to find Vinography readers some cutting-edge sakes that you just can’t read about anywhere else in English.

Well, I succeeded. But then I started floundering around trying to find out where you can buy these great sakes, and discovered it would be easier to get a first-edition copy of my first favorite book: The Blueberry Pie Elf. (This elf won’t settle for cherry pie when he wants blueberry, and why should he?)

OK, I know, you want to hear about this week’s baby — the product of a brewery started in 1716 by the family of a “ronin” (masterless samurai) who settled down to become a merchant; his descendants wanted to diversify from the canola oil business. The family histories in the sake world make Bordeaux chateaux proprietors seem like a bunch of grasping nouveau riche.

But it’s the Internet; let me whine about my labor pains a little more. I emailed breweries in Japan and had conversations so excruciatingly polite that I couldn’t understand them. (“Thank you respectfully for your pleasant inquiry, which, though we are unworthy, we are pleased to receive warmheartedly.”) I contacted US distributors, some of whom weren’t much better. (“Yes, that’s right what you said about that sake you can’t find being delicious.”)

There’s a lesson in this, and it’s that the premium sake world is not so different from the world of Pinot Noir. You might be able to come up with a sake from the producer you’re seeking, but that’s not really good enough. If I want a Siduri Sonatera Vineyard Pinot Noir, a Siduri Russian River Valley Pinot Noir just isn’t the same. Ditto sake: If I want a producer’s junmai ginjo, that brewer’s plain junmai or plain ginjo — much rarer — might taste completely different.

Which brings me to this week’s sake. In Japan, non-junmai ginjo sakes aren’t rare at all. US tax laws make this sake an oddity here, but fortunately an easily buyable one.

For ginjo sake, at least 40 percent of the rice has been polished away, removing impurities. That’s expensive. Junmai (“pure rice”) sakes are made with no added brewers’ alcohol. Sakes can be both; in the US, ginjo sakes are usually also junmai. But they don’t have to be.

Sakes that have brewers’ alcohol added are taxed at a higher rate by the US government, discouraging importers from carrying them.

But adding alcohol is not inherently bad. Japanese drinkers prefer honjozo sakes — these have alcohol added, and are not at the ginjo level of quality — because they’re lighter in body, drier and often more food-friendly. Junmai sakes are more wine-like, for better and worse, which is why wine drinkers like myself respond so positively to them.

Tasting sake at a brewery in Japan is interesting because they offer so many more choices: sesshu (the lowest level), honjozo, junmai, ginjo, junmai ginjo, daiginjo (at least 50 percent of the rice polished away) and junmai daiginjo, and they’ll all taste different.

Many also offer several junmai sakes made from different types of rice, so you can compare.

Here in the US, most importers narrow each brewer’s product line to two of those choices; usually both are junmai.

Perhaps Pacific International Liquors in SoCal made an exception for this sake because of its hardware. The Okunomatsu Ginjo won first price in Japan’s 26th national sake contest in the non-junmai ginjo division.

That’s interesting to me because this sake doesn’t have the lean profile I expect of a non-junmai ginjo (see tasting notes below).

Perhaps this creamy sake seduced the judges in that category the same way a super-ripe red wine can impress palate-weary wine tasters.

Why is it so smooth? Brewers usually credit the water, and Okunomatsu takes its water from springs from snow-covered Mt. Adatara.

Okunomatsu is in Fukushima prefecture, about 300 km north of Tokyo, and directly east of two prefectures far more famous for sake: Niigata and Yamagata. Those two border the sea of Japan, while Fukushima faces the Pacific Ocean. Fukushima doesn’t have the sake reputation of its neighbors, but just looking at a map, it’s hard to say why. Perhaps it’s the agricultural tradition: Niigata and Yamagata have remained farming-first communities into the 21st century, while Fukushima has a strong electronics industry.

Anyway, it’s a soothing solution for drinkus interruptus — though obviously my blatherus problem isn’t going away.

Tasting Notes:
This sake is creamy on both nose and palate. The aromas are of fresh cream, yoghurt and green melon with some floral hints. It’s very clean and smooth in the mouth; accent on the “fresh” part of fresh cream. You taste green melon initially, along with hints of lime and pear. I got a little astringency on the back of my tongue, but that was fine in contrast with the medium-length creamy finish.

Food Pairing:
The smoothness of this sake calls for equally smooth cuisine, if you can imagine that: pasta with salmon cream sauce would be an interesting pairing. We had it with sashimi and liked it best with the fattier fish. Stay away from vinegary dishes that would emphasize the astringency.