The Best of Brazilian Wine: My First Taste and Impressions 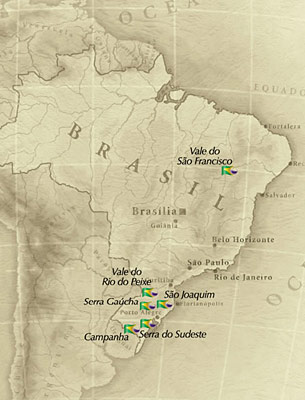 Call me curious, or just call me a big geek, but I get really excited when I get the opportunity to taste the wines from somewhere I’ve never tasted before. So when the invitation came in to attend an event focused on the wines of Brazil, I jiggled some appointments around and snuck out of work for an hour last week and spent some time on my “other job” — the intrepid global wine explorer.

My experience with and knowledge of Brazilian wine before this tasting amounted to a big fat zilch — never tasted it, never talked about it, never read about it.

Of course, in the back of my head, I knew Brazil was a wine producing country. A good portion of the country dips down into the latitudes of places like Mendoza and Salta, two great wine producing regions of Argentina, but I knew little about the topology, climate, and history of this area of the country.

It turns out that, not unlike Argentina, Brazil has a relatively long history of winemaking (for the New World) thanks to the primarily Italian immigrants that settled the southern part of the country in the mid 1800s. Like many immigrants everywhere, they brought grapevines and a tradition of wine — both a cultural custom and a welcome respite for a difficult life. The wine craft and culture of Brazil remained essentially a local agrarian village industry for the next thirty years, with only a modest amount of wine leaving the region to elsewhere in the country.

It wasn’t until the mid 1960s that the industry began to seriously expand and invest in the modernization that would be required to compete on the global market. Family wineries began to send their children to universities to study oenology and viticulture, and new vineyard sites began to be selected based on soil science and micro-climactic measurements. Slowly the industry grew up.

In 1998 the Brazilian Wine Institute was created. Today the country has nearly 30,000 acres under vine and produces about 45 million liters (5 million cases) of wine per year, fairly equally split between red and white varieties. The vast majority of that wine production (90+%) still takes place in an area known as Serra Gaúcha which is at around 29 degrees south latitude, roughly parallel to Mendoza Argentina and sandwiched between Uruguay and the Atlantic Ocean.

Serra Gaúcha is a hilly plateau at about 640m/2100 feet above sea level and is planted primarily with red and white Bordeaux varieties, plus some Chardonnay, Muscat, Pinot Noir, and Gamay. Annual temperatures range from 12C/54F to 22C/72F, and the region gets about 68 inches (!) of rain per year.

In addition to Serra Gaúcha, additional vineyard development is taking place in a region called Vale do São Francisco, which is a very interesting sounding wine region. Located in the Northern part of Brazil, the flat plains of this are at a mere 9 degrees South latitude, and are extremely dry. The warm climate and the artificial irrigation required to grow vines allows two harvests per year.

Of course, that’s interesting stuff, but all academic. Good background, but what matters, of course is whether the wine is any good, right?

And generally, I’m sad to say, it is not.

Many of the sixty or so wines I had the opportunity to taste at this event weren’t very good. But there were a few that were decent — decent enough to prove that it certainly is possible to make quality wine in the country. Whether or not it is possible to do it in quantities and at prices that would allow Brazil to carve out a little bit of the international export market I don’t have the information to say, and which I am certainly not qualified to judge.

So while Brazilian wine must generally be avoided by those looking for predictably high quality wines, those like myself that are willing to experiment and explore will doubtless find gradually improving wines coming from the land of Carnaval.