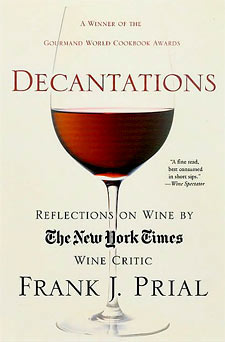 Frank Prial’s New York Times wine articles educated and entertained subscribers for more than 25 years. His small piece of the Dining section whisked readers into historic chateaux, through renowned vineyards, and into hearing range of the business’s most interesting people.

Food and wine lovers no doubt looked forward to his articles, but they were ephemeral works destined to be the next day’s birdcage liner. Devotees can now trawl through the Times’ online archives to find them, but they might prefer to pick up Decantations: Reflections on Wine by The New York Times Wine Critic which binds together “his finest columns,” according to the back cover.

Newbies and experts alike will find solid information in these articles, which range from winemaking to wine writing. Prial has a journalist’s eye for detail and focus, drilling down on his subject while providing context for the average reader. His essay on the 1855 Classification of Bordeaux wines, for instance, reels in France’s desire to compete with England, earlier attempts at classifying the region’s wines, and the influence of the Rothschilds while never failing to explain how the classification works and its modern-day problems. In every piece, he writes with a newspaperman’s Spartan prose: There’s no florid wine-writer-ese here, just a minimalist’s simple, direct sentences. Of preparing for harvest at Bordeaux’s Château Margaux, he writes, “Picking at Château Margaux began on September 16, a Saturday. Spirits were high. It had been a spectacular summer for grapes in Bordeaux, hot and dry. If the rain held off, it could be a very fine year, even spectacular.” Short sentences, a little bit of internal rhyme, and a flowing rhythm are typical of his writing.

But in the end, the book format doesn’t work. In a daily newspaper read by a large, general audience, small digressions that give a reader background make sense. In a book, that same digression becomes a constant refrain as each piece, one after the other, includes it.

And while the Dining section imposed a short space on Prial, the pieces in the book feel abrupt — good for a commute, perhaps, but almost like staccato shots in a longer tome. Just as you feel like you’ve settled in for a long story, it ends.

Prial has plucked pieces from across the years, which means some are out of date. Winemakers have moved on, large corporations have bought small wineries, and new wine regions have opened up. Randall Grahm is no longer imagining a far-off day when he might explore biodynamic wines, as he was in 1998; he recently sold off his large brands and is bringing all his remaining vineyards into biodynamic practices. In 1992, “only the most optimistic vintners expect English wine to ever be more than a marginal agricultural endeavor”; today’s higher temperatures have begun to move English wine out of the fringes. All these anachronisms might be okay if the publishers hadn’t made a fatal design mistake. They appended the run date to each piece, rather than printing it at the head of the article. Instead of going into a piece thinking, “Ah, this was written in 1989,” you find yourself flipping to the end when you’re midway through in order to figure out when Prial wrote the piece. That simple choice provides a constant distraction.

Frank Prial is one of the most influential wine writers of the last few decades, and despite their frustrating brevity and occasional anachronism, these essays show a masterful hand. Read them on your commute, while standing in line, or whenever you have a little time that you want to fill with wine.

Derrick Schneider is a freelance writer and the publisher of the blog An Obsession With Food.