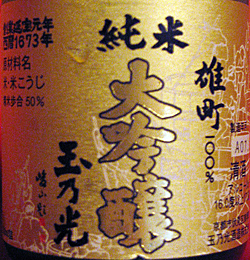 I go to Japan to do three primary things. See beautiful crafts and architecture, eat amazing food, and drink sake. One of the tricky parts of the latter is that unlike anywhere else in the (Western Alphabet) world I can’t read the sake list if there is one, which most of the time there isn’t. Nor can I look at the label of the bottle that has been brought to me and understand what it is, who made it, or where it comes from. And because my spoken Japanese is somewhat limited, there’s only so much I can pry out of our server about the bottle before she starts to look bored, uncomfortable, frustrated or all three.

All of which means that it’s a bit of an adventure whenever I go into a restaurant or a sake store in Japan. I typically ask for ginjo or daiginjo sake (sakes made from rice that has been polished down to less than 60% or less than 50% of its former mass, respectively) and then see what happens.

To add another layer of complexity to the whole thing, which can be even more frustrating — once I actually come across a sake that I like, and should I actually be able to figure out its name, producer, and geographic origin, most of the time it’s a bottle that doesn’t get exported. You see, most sake breweries make a wide variety of different sakes, sometimes scores of different bottlings, and included among those are their “export” bottlings, which may or may not bear any resemblance to those sakes that end up being sold in Japan.

Can you imagine if, in addition to their top wine, Chateau Latour made a special “American” blend of their wine (no sniggering about fruit bombs, and micro-oxidation please) and that was the only wine from that producer that was allowed to be sold in the USA? That’s the sort of world that sake lovers have to contend with as they tromp around Japan. Crazy eh?

All of which means that I was pleasantly surprised last night when I was served a sake that I not only recognized (and had tasted before), but that was made just a few kilometers away from me, and is actually available in the United States (at least, there is an export version of the same sake, which I believe is from the same batch).

Last night, Ruth and I sat down to a meal of cha-kaiseki, a formal multi-course dining experience that many believe is the pinnacle of Japanese cuisine. It was pouring rain, and the narrow back streets of Kyoto were lit by rectangular splashes of light coming from the many entryways to traditional ryotei restaurants that lined the dark alleys. We ducked into one and were met by our waiting host who guided us through the warren of tiny hallways of the old teahouse to our private tatami room where we drank our green tea and watched the rain fall on the garden as our nine-course meal was being prepared.

This meal, as usual for kaiseki dinners, featured local, extremely seasonal ingredients, and so I was very pleased when I was told that the daiginjo sake I was going to be served was this special brew from Tamanohikari, which was about 30 kilometers from where I was sitting.

Tamanohikari has been brewing sake in the Fushimi district of southeastern Kyoto off and on (wars, warehouse fires, and changes in family ownership notwithstanding) since approximately 1673. Fushimi is one of Japan’s original sake making localities. Tucked against the base of Mount Inari, the many Fushimi breweries have access to cold, pure mountain water, and were a short cart-ride from the imperial palace in Kyoto to do a brisk business.

Tamanohikari, which roughly translates to ‘Brilliant, Prosperous Jade’ is somewhat unusual among sake breweries these days in that it produces only two grades of sake (ginjo and daiginjo, which, again, is determined by the amount of milling that the rice receives) and every sake that they produce is made using the junmai method, which means that it is produced without using any added alcohol.

A lot of people think that adding alcohol to sake is equivalent to taking a 13% alcohol Chardonnay and spiking it up to 14.5%, which couldn’t be further from the truth. Only a small amount of alcohol is added in the non-junmai sake making process, and it is added during a point in the process where it aids in the development of aromatic compounds by the koji mold as it attacks the rice. This is not the place to attempt to settle the finer points of junmai versus non-junmai sake making, but suffice it to say that some people believe that, like “natural yeast” fermentation for wine, junmai sake is more “natural” or “pure” than the alternative. This may or may not be true, but one thing is for certain, it’s more difficult to make a really amazing junmai sake, and that’s what Tamanohikari has dedicated itself to doing since the invention of the form several decades ago (remember, readers, that highly refined sake like junmai daiginjo is a relatively recent invention).

In addition to its dedication to the most strenuous and refined form of sake making, Tamanohikari is also famous for having revived a strain of sake rice that was long thought to be lost forever, after it stopped being popular with farmers who had trouble harvesting its long stalks with newer more mechanical methods of harvesting. The Omachi rice strain was grown primarily in the Okayama prefecture of Japan and was popular in the Meiji era of Japan (the latter half of the 1800s) as a table rice variety. The rice strain itself was discovered in 1859, and appears to be the oldest rice variety in Japan. Also, unlike all other sake rice varieties, it is a pure strain of rice, rather than a crossbreed.

So Tamanohikari was one of the first producers to start making sake from this rice, and while the rice used in Sake does not have quite as much influence on the final flavor as say, the variety of grapes used in wine, it is certainly a factor, which makes this bottle of sake, made from 100% Omachi rice, a bit more special than it otherwise might be.

Tasting Notes:
Colorless and viscous in the glass, this sake has a sweet, earthy aroma with a hint of alcohol. In the mouth it is smooth, with a pleasing weight on the tongue, and primary flavors of wet wood, nuts, and hints of malted chocolate milk. It finishes clean and long with hints of citrus and floral aromas, but much fainter than would ordinarily be expected in a junmai daiginjo such as this. The earthy, almost herbal aspect of this brew is attributed to the rice.

Food Pairing:
This sent beautifully with many aspects of our kaiseki meal, but perhaps my favorite pairing was with goma tofu (a tofu made with black sesame instead of soybeans) topped with fresh uni (sea urchin) and wasabi.