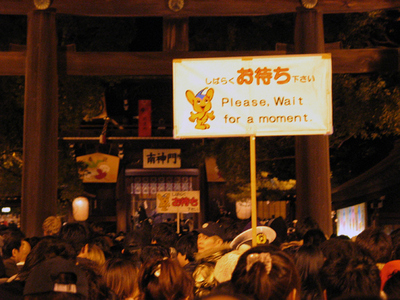 Happy New Year! Here’s wishing you a year of new wines, new experiences, happiness, and health for you and your family. Here in Japan it’s already 2008. Along with three million of our closest friends, Ruth and I visited the Meiji Jingumae shrine in Tokyo to ring in the new year (literally) by ringing the bells at the temple. Seeing the crowd control alone is worth the experience:

Wouldn’t police action be so much better if it were always accompanied by such lovable characters?
That’s a picture up the main walkway to the shrine, and there are about 40,000 people in front of us waiting to pray at the shrine to welcome in the New Year.
Of course, this is a wine blog, so what I’m really here to tell you about is wine related. Hard to believe there would be a wine angle on three million Japanese queuing for New Year’s blessings. But of course, there is!
One of the things that you do after you ring in the New Year is drink fresh sake (namazake), which is provided by thousands of sake breweries all over the country. Donating a cask of sake is quite prestigious, and I’m not sure about the whole protocol or significance of it, but the casks are very prominently displayed at the shrine. This sake is used to consecrate the shrine in some way (Shinto experts, help me out here). 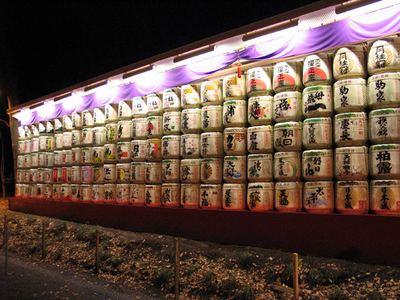 These casks are a common site at such shrines, especially around the New Year.
What AREN’T such common sights, however, are several dozen barrels of Burgundy! 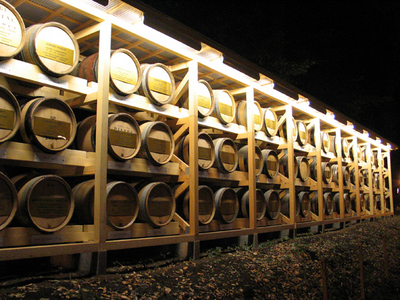 My jaw nearly hit the centuries-old cobblestone path when I saw this rack of barriques bearing some of Burgundy’s top names sitting opposite the racks of sake casks.
I’ve been to this shrine dozens of times, and I don’t remember seeing these before — I’m guessing they went up in the last three years. According to the sign posted next to them, it turns out that one of Japan’s members of Parliament is not only a wine lover and the head of the Japanese Burgundy society (whatever that is) but he also owns a Chateau in Burgundy himself. And I guess he managed to convince enough Japanese MPs (and Burgundy winemakers) that it would be a good idea to have a bit of Pinot in addition to sake, and voila!
So whether you’re ringing in the New Year with wine or sake, you can rest assured that the gods are smiling on you.
Here’s to a fabulous 2008!