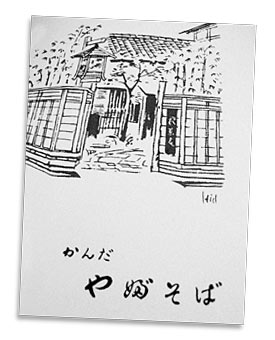 Reviewing some Japanese restaurants presents a bit of a challenge in that the food so deceptively simple, that one is at a loss for describing the art behind it. Just as with sushi, in its elemental, stark composition of fish and rice, a discussion of soba will eventually descend into ethereal subtleties that sound more like spirituality than proper food criticism.

Soba is essential, in the truest form of the word — these buckwheat noodles are about an essence of flavor that mirrors many of the attractive elements of the traditional Japanese minimal aesthetic. Soba is to food what an impeccably clean tatami room is to interior design.

An impeccably clean tatami room, however, is not where you will most likely find the best noodles however. soba is a workman’s meal — a cold plate of noodles that can be served in minutes and consumed even faster. Its most common form is fast food, sold at little shops in train stations and in alleyways throughout Japan.

Some restaurants, however, take soba seriously, even reverently, and these restaurants are invariably a little classier than standing counters in train stations. Such restaurants are also inevitably magnets for Japanese food lovers, who think nothing of standing on line for 45 minutes for a dish that they might consume in 10.

Certainly one of the ways you might stumble on Kanda Yabusoba might be the line of such food lovers that usually snakes out of its little garden and into the street around lunchtime. Of course, you would have to have accidentally wandered into a nondescript street in the middle of a relatively quiet Tokyo neighborhood, which isn’t likely. Practically no one ends up at Yabusoba by mistake — instead they come seeking some of the best soba noodles in Tokyo, crowding along the bamboo-lined cobblestone path inside the gate, listening to the sound of the woman singing out each noodle order from the edge of the tiny bustling kitchen. It’s not hard to imagine, as you stand there in line, that apart from the fashions things didn’t look a whole lot different when the restaurant first opened its doors in 1880.

The menu (which is available in English for anyone who asks) is quite simple. The restaurant offers 13 different variations on soba, from the classic seiro soba which consists of cold noodles to be dipped in the cold tsuyu sauce, to versions served in hot broth, or topped with tempura fried shrimp, dried seaweed, or fish paste. Perhaps in a small concession to more catholic noodle lovers, the restaurant also offers a single bowl of udon noodles — the thicker, wheat flour cousin of soba.

Yabusoba serves a type of soba noodle known as cha-soba, which is made using buckwheat and a bit of powdered green tea.

While everyone has their favorite version of soba, most certainly the best way to truly savor the simple, subtle flavors of these masterfully hand-made noodles is to order the seiro soba, a simple pile of noodles on a bamboo mat.

In this form you experience soba at its most pure. And what is that exactly? It’s hard to say just how much a simple noodle made from buckwheat flour, a little wheat flour, and a pinch of green tea can convey in a bite. But like all great delicacies there’s nothing like it in the world. Fantastic soba is a study in texture and in flavor. In the mouth, the best noodles are something of an enigma, perfectly poised between firm and soft — beautifully smooth as if made from glass, yet yielding to the bite. The flavors tend to remind me of a forest just after a spring rain — woody, grassy, fresh.

Soba noodles tend to disappear quickly, both because they are served in modest portions, and also

because they are so easy to slurp up. But as long as you want more the aproned ladies that clip-clop around the stone floors on their wooden sandals are happy to bring more.

Guests can sit either at standard western dining tables and chairs, or they can leave their shoes in the center of the large main room and sit at the traditional low tables over tatami mats in their stocking feet. You can request either, but if you do not, you’ll just end up at the next available table. From both, depending on which direction you face, you’ll be able to see both out into the little landscaped garden or across into the kitchen — both views that hold fascinating details for keen observers that might let their attention wander from the noodles for a moment.

Of course you can’t linger in reverie too long, because there are thirty people waiting for your seat. Such is the essential nature of noodles in any century, it seems.

How much?: Seiro soba runs about $7 US, with other soba dishes priced at around $13. Two people can have a nice lunch for $40.

Open seven days a week 11:30 AM to 8:00 PM, except on national holidays and some festival days. No reservations taken. Major credit cards accepted.