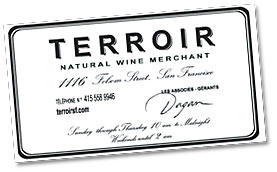 I derive a particular joy from the fact that the city of San Francisco is finally beginning to live up to its potential as the wine metropolis. In the last 2 years we’ve gone from a city of perhaps four or five wine bars to a city positively overflowing with them.

Now that we’re getting up in numbers, however, its good to see the market driving some differentiation between them. It simply wouldn’t do to merely have a couple of dozen wine bars. Rather we need different wine bars for different occasions, so that your evening’s quaffing can be in line with your mood. Let your palate guide your nightlife in the City of Wine.

One of the newer additions to the SF wine bar scene will tickle the most stringent of palates. If you’re the kind of wine lover that thinks wine is best when man or woman barely touches it, then you’ll appreciate the mission of Terroir Natural Wine Merchant, the little retail shop and wine bar that has opened up a few doors down from the irrepressible BrainWash cafe and Laundromat on Folsom street in SOMA. This outfit specializes in one thing and one thing only: biodynamic and so called “Natural” wines from the US and Europe. Biodynamic wines are, of course, grown without commercial pesticides or fertilizers on farms that attempt to create a closed ecosystem of farm animals, bugs, and vegetation focused on creating the most “alive” soil possible to be worked according to the esoteric mystic guidelines of the Biodynamic faith. So called Natural wines are produced primarily in France according to similar, perhaps less New Age, tenets with the additional specifications that no additives of any kind can go into the wine, including sulfur, which Biodynamics does allow.

All of which means that if you’re a strict vegan, an ethical purist, or a certain kind of wine geek, you might find something to drink here.

Terroir manages to walk the line between wine store and wine bar with a sort of clumsy and affable grace. This is not a chic destination by any means, as the space doesn’t manage to (and certainly doesn’t try to) elevate itself beyond retro-industrial-warehouse, if you know what I mean. This is a (chilly) wine warehouse turned into store and wine bar through the addition of some shelves for bottles, a bar for leaning on, and some stools. The best place to sit, if you’re not chatting with one of the gregarious staff behind the bar, is at one of the two tables that occupy a loft above the main space, which have the benefit of being one or two degrees warmer than the rest of the space, and a slightly cozier feeling up amidst the reclaimed wood beams and plaster ceiling.

Just as you shouldn’t come to Terroir expecting a scene, you also shouldn’t come expecting phenomenal service, unless you’re the only one at the bar and you have the owner’s full attention. It’s a small place, and things get done when they get done, which means if you order some cheese from their weekly changing list of gourmet imported cheeses or some salami, it might take a little while to make its way in front of you. 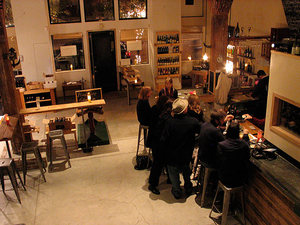 Those two items make up the entirety of the food offering here, which is OK, because with only a few daily changing wines by the glass, this isn’t a menu that you’re going to want to explore over hours.

Last time I was in there were about six wines being poured by the glass, two whites and four reds, all of which were interesting wines that ranged in price from $9 to $17 per glass. These prices reflect the somewhat higher prices of the wines served, but may not excite those who are looking for an inexpensive way to start the evening. If asked, the folks at the bar are happy to pour half glasses for half the price.

If you have a few friends and can’t find anything you like on the by-the-glass list, you’re always welcome to buy a bottle and add a $12 corkage policy to the generally very well priced retail sales tag. The selection of about 100 wines spans many different international regions of the world, though it is surprisingly light when it comes U.S. wines, offering four or five reds and about as many whites.

Should you not be familiar with the producers on offer, or the finer points of biodynamic winemaking, the staff are more than happy and definitely capable of helping. They generally know the wines quite well, and can geek out about them for those who care to, or simply steer the inquisitive to something that they’ll like.

With such a limited offering of wines by the glass, a chilly, bare-bones interior, and wines that many people won’t recognize, Terroir is certainly not going to be a highlight of San Francisco nightlife, but it might just survive on the patronage and interest of San Francisco’s serious wine geeks.

Open Sunday through Thursday 10:00 AM to Midnight. Open Weekends until 2:00 AM. Street parking in the neighborhood is reasonable after 5:00 PM and it is walkable from the Civic Center BART station, though not through the greatest of neighborhoods. Bring a sweater.