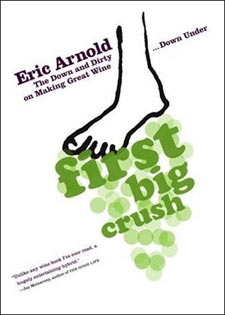 Have you ever daydreamed about a different life? Perhaps one set in some sun-dappled, far-flung wine-making countryside where rows of grape vines bursting with perfect fruit are transformed with the help of your touch into magnificent wine? A better question might be—has anyone with even a cursory interest in wine actually not harbored this fantasy?

Eric Arnold, a 20-something former joke and copywriter decided to chuck it all, leave New York and take his version of that daydream to the next level. What resulted is First Big Crush: The Down and Dirty on Making Great Wine Down Under, a rollicking romp through one full year, harvest to harvest, in New Zealand’s Marlborough winemaking region. First Big Crush follows Arnold’s good natured quest to understand how his favorite wine to get drunk on, Sauvignon Blanc, gets from the vine to the bottle.

Arnold arrives for his big New Zealand adventure completely clueless, but also totally guileless and resolutely cheerful—which makes for a very entertaining guide for the general reader who wants to get a little virtual dirt under her fingernails, or, as it were, grape skins in his virtual underwear along the way. The book starts with Arnold’s procuring of an unpaid job at the Allan Scott Winery, a highly regarded maker of Sauvignon Blanc and also of Chardonnay, Riesling, and Pinot Noir. The author drops into the rural New Zealand outpost equipped with only a work visa and a poorly selected wardrobe. Arnold barely understands the difference between plonk and the good stuff, but is nevertheless immediately tossed into the winery’s stew of colorful people from cellar to field, as well as the dirty and often dangerous work that takes the veil off of winemaking.

It’s a great concept—fish-out-of-water urban American parachutes into the land of rugby playing, pig hunting, heavy drinking, hard working rural New Zealand with only a vague idea about how wine is made. First Big Crush is a prose reality show where our fledgling protagonist endures every filthy, body breaking, frustrating, and hazardous element of the harvest, from the ABCs of pitchfork operation to the mind numbing and back destroying weeks spent pruning winter vines in the cold fields. Along the way we get a feel both for the endless hours and the all-hands-on-deck commitment to bring in the harvest and for the lusty, profane and fun-loving Kiwi winery culture that seems overloaded with testosterone, hard partying, and real dedication their work. Good times include wine country festivals where people eat sheep testicles and throw back shots of bull semen, and the kind of buddy frolics where bar brawls, womanizing and throwing up most mornings are all part of the season. Working hard and playing hard comprise the circle of life in Marlborough.

At first the author severely underestimates the incredible workload of the endeavor and its seemingly endless scope. But he hangs in there, managing to avoid major bodily harm, and the reader bumps along for the ride, wincing as Arnold learns firsthand, for example, of the fearsome, deadly force of a previously unthreatening must pump.

Arnold is at his best when digging into the real processes of a wine harvest. He writes with ease and clarity, whether describing the various types of vine caning methods in the winter months, the step-by-step progression of getting crop loads out of the field and through the winery’s crushing process in time, or the various techniques of fermenting and styles of winemaking. You feel like you know the folks who make the wine, fight and make up with each other, despair over raindrops and frost levels and work the very long, hard hours to keep the vines healthy and choose the time for picking each varietal practically to the minute.

The book should come with one warning label, however. Arnold is a funny guy, but his humor seldom transcends Early Frat Boy, which can become a distraction. Every ten pages or so the flow of his story is interrupted by a lazy joke involving body cavities; sexual organs; self-pleasuring; any kind of corporal violation to animal, vegetable or mineral imaginable; and throwing up, passing out, or relieving oneself anywhere and everywhere. Some of the jokes work, most of them clutter. Suffice it to say, one is best advised not to give First Big Crush to one’s mother in law.

The book is nicely peppered with local detail, including a host of New Zealand winemakers and personalities, and an interesting passage on what really goes on during wine rating and award competitions. The final chapters are among the most compelling. The author decides to apply for day-labor work in the vines for nebulous contractors who advertise in the paper, don’t check for visas and preside over their poorly paid charges under the blazing sun providing neither water nor sun protection. It’s a chilling moment in the narrative, conjuring America’s cotton picking history or any forced labor environment. One is reminded of the steep price field workers pay to keep agriculture going.

First Big Crush leaves the reader with an abiding respect for the particular constellation of forces—the people, ideas, science, tradition, blood, sweat and Mother Nature—that make great wine possible and the fantasy of it interesting to dispel. Unpretentious, fun and a refreshing departure from the glut of technical and stiffer titles on the wine category bookshelf, anyone thinking of freeing his or her inner winemaker should pick it up.

Christy McGill is a California-based screenwriter and essayist writing about such serious matters as wine, food and the pursuit of the surfer’s life.