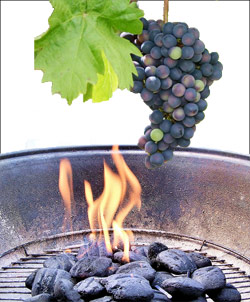 There were a few weeks in June when the last place a wine lover would have wanted to be was the ordinarily idyllic Napa Valley. A thick haze of blue-gray smoke hung in the air, as if the San Francisco summer fog had crept north and picked up every bit of car exhaust along the way between the Golden Gate bridge and Oakville Crossroads.

Unless you’ve been hiding under a rock lately, you’ll know that here in California we’re having an unprecedented fire season. Somewhere over 3000 blazes in just the first month of the summer, when in some years the total number doesn’t even break 500. Blame a combination of hot weather, lightning, and a very dry Spring, but pretty much everything is burning down in California, even the famously fire retardant redwoods.

As I drive up Highway 29 in Napa, I often wonder to myself just how much all those vines that sit about 4 feet from the edge of the highway deal with all the car exhaust and grime. I guess what I really wonder is how the winemakers deal with it. It’s not like you can just wash them very easily….

A bit of highway grime is one thing, but several weeks of heavy smoke represents an entirely different challenge. Despite plants’ (including grapevines’) tendency to filter the nasties out of the air and replace them with nice pure oxygen, there’s just no way for most flora to cope with extended periods of smoke. It permeates their membranes, and doesn’t make them very happy in the process.

The same is true for fruit. I can remember picking apples as a kid from an orchard that was downwind of a blaze, and despite carefully washing the fruit, tasting something that most certainly prevented me from finishing the apple.

Scientists in Australia have clearly proven that wine grapes are affected by smoke. In 2004 a series of fires significantly compromised a number of vineyards in Western Australia, and the farmers are still seeking compensation for the damage from the government.

Apparently it is possible to remove the smoke taint from wine, just as you can remove a number of other unwanted compounds or particulate matter. You filter and fine the wine. Apparently just the right filter can remove most of the “effects” of smoke on grapes. But what else has to be remove in the process I do not know.

When given the option to drink unfiltered, unfined wine, I always choose to do so, but when it comes to the 2008 vintage in some parts of Northern California, some may be forced to seriously filter their wine, or risk not having much of a wine at all. Or maybe some Napa Syrah will just have an extra note of smoke this year.