Will UV Treatment of Wine Save Terroir? 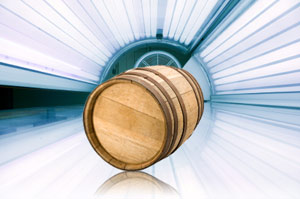 It seems like every week, there’s a new story about some inventor debuting some newfangled technology to make wine better. Most such stories seem to involve some device that can turn cheap wine into much better wine, auto-magically, which I’ve now decided is the wine world’s equivalent of the famous line “I’ve got a bridge to sell you.”

But occasionally we actually get some news of a technological innovation that doesn’t involve auras, electromagnetic fields, or crappy wine, and which might actually make a difference in how wine gets made from here on out.

Such is the case with the story this week, of the first wine to hit the market that has been treated with UV light

instead of sulfur dioxide and filtering.

Sulfur dioxide is one of the most useful and prevalent chemicals used in the winemaking and winegrowing process. It is used both as a disinfectant for winemaking equipment, but also as an additive to wine, in small quantities, with two primary purposes — to prohibit the growth of unwanted bacteria and yeasts in the wine, and to retard oxidation as the wine is exposed to air. You’ve likely heard of that nasty stuff called Brett (Brettanomyces yeast) that gives wine a manure-like smell and flavor? Well it and other bugs like it are some of the chief reasons that nearly every commercial wine in the world uses at least a little sulfur dioxide.

Even after a wine has fermented to dryness (no more sugar for the yeasts to eat) there are still lots of living things in the wine that potentially can cause the wine to change in ways that most winemakers want to prevent. One of the last steps in the winemaking process is to either make sure that there’s nothing more for these little critters to feed on, or more commonly, to try to either kill them or remove them from the wine. Hence the use of sulfur dioxide (think edible RAID for renegade yeasts) and filtration (which strips them out of the wine completely with a strainer, so to speak).

The problem with sulfur dioxide is that it stays in the wine, and in large doses can change the flavor and aroma of the wine, as well as increase the likelihood that people with allergies or sensitivities to sulfites will have a reaction to the wine. And the problem with filtration is that it tends to strip out a lot of the character of the wine — unfiltered wines tend to be more complex and to show their terroir better.

It’s the sulfite problem, I believe, that has really motivated the investigation into UV treatment of wines. The idea being that if there is a way to kill the active biological agents in a wine without adding sulfur, then so much the better for everyone. And that’s just what this new processing seems to do. Wine gets sloshed around in a series of chambers and exposed to UV light until all the yeasts and bacteria are dead. Simple as that.

Of course, anyone who makes handcrafted wines will tell you that “sloshing wine around in a series of chambers” is not exactly how they’d want to treat their young wine. Much is done in the winemaking process to avoid excessive turbulence and agitation of the wine. You’ve doubtless read or heard wineries make a big deal about being gravity-fed, and not doing any pumping of their wine, for precisely this reason.

But leaving aside for the moment the question of whether this agitation might do more harm to the wine, this technology interests me the most for its secondary benefit: the potential to keep many wineries from having to filter their wines.

I’ll drink wine treated with sulfur dioxide all day long for the rest of my life (well, I do anyway at the moment). But whenever possible, I choose to drink wines (especially red) that are unfined and unfiltered, because invariably they are simply better than wines that aren’t.

Filtration and fining (a process used to reduce sediment while the wine is in barrel) are quite common winemaking practices, especially here in the United States. They are used both to prevent biological agents in the wine from acting up and re-fermenting the wine once it has been bottled, and, unfortunately, to remove cloudiness and sediment from wine because American consumers see them as flaws and often refuse to buy cloudy or sedimentary wines or return them after purchase if they notice such things.

It’s a sad but understandable state of affairs. A lot of wineries take a better safe than sorry approach, and both fine and filter their wines rather than risk either spoilage or consumer rejection. But as a result, they often strip the soul out of their wines.

But if tomorrow, every winemaker in the world stopped filtering thanks to some handy UV technology, the quality of wine would significantly increase immediately, and, dare I say it, there would be a lot more terroir out there on the market.

Really it’s like some sort of Kermit Lynch (an importer who has championed unfiltered wines for years) wet dream. The idea that even $8 wines produced in large quantities could conceivably get to market without fining and filtration is a really tantalizing future. Of course there’s still a lot of education to do to convince consumers to ignore the sediment and cloudiness in their wine. But the world would certainly drink better for it.

It’s quite encouraging to see technological progress like this in the wine world, especially when it might offer both the opportunity to get more people drinking wine (for less fear of headaches and reactions) and make it easier to make wines with a little more soul.