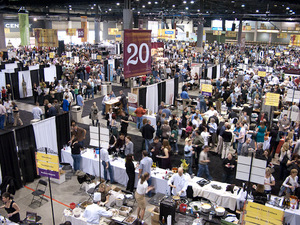 The first week of April I got the opportunity to do an “immersion” course in Washington State wine. No, this didn’t involve repeatedly dunking me in a vat of wine, amusing though that would have been. Rather, it involved attending the annual Taste Washington wine festival in Seattle.

I flew up to Seattle for two reasons. I was asked to give a seminar at the event, which I gladly did, focusing on wineries that made their wine in unconventional places like garages, barns, airplane hangers, fire houses, etc. But mostly I was excited for the opportunity to taste a ton of wine.

Prior to this trip I think I had probably tasted forty or fifty different Washington wines in the course of various tastings, buying off restaurant menus, drinking with friends, or any of the normal ways that an active wine lover might come across wines from a particular region.

Fifty wines is not an education. But two hundred and fifty is a good start. That’s about how many I managed to taste in the course of the day I spent at Taste Washington.

Before I get on to my scores for the wines, it’s important for me to commend the organizers of the Taste Washington event for putting on one of the best public wine and food events I have ever had the pleasure of attending. Yes, it was in a HUGE convention center, which didn’t exactly provide much atmosphere, and yes it was crowded. But the event was impeccably organized, easy to navigate, and perhaps most importantly, the quality of the food on offer was some of the best I have ever had at such a large public event. While I qualify as a member of the press now and get into such events for free, I would gladly pay the $85 to go. Heck, I probably ate $85 worth of Kumamoto oysters while I was there.

It’s quite clear, without a doubt, that for the same quality of wine Washington State Cabernet in particular is about half the price of Napa. Need I say more?

While I’ve certainly had a few excellent Rieslings and Semillons from Washington, and there is clear potential to make excellent white wine in the state, I definitely consider Washington to be “Red Country.” The Bordeaux and Rhone blends on offer can be excellent, and they, like all the best made wines I tasted, are marked by excellent acidity, and purity of fruit.

In short, those who love a great Cabernet Sauvignon would do well to explore these wines more thoroughly, especially in these economic times.

So without further ado…