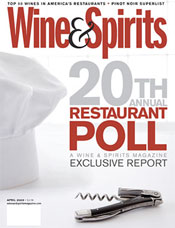 Summer is almost upon us, which means a last minute flurry of wine events around the country before the heat sets in. Especially in New York City.

New Yorkers don’t seem to get quite as many large public tasting events as we do in California, no doubt in part because of the expense of flying in with a big box of wines to pour for the public. This is a shame, really, as it’s a great market for such tastings. Which is why I always try to point out to my New York readers when the opportunity arises to spend a few hours tasting a lot of good wines.

Wine & Spirits Magazine puts on one of my favorite tastings every year, and has recently started doing more events that feature excellent wine and food. Next week, they’re taking over City Winery in New York for an event they are calling The Top of The List Tasting, which features the wines that earned top honors in their annual Restaurant Awards. I’m not quite sure I understand what that means, but what I do know is that nearly 100 vintners will be on had on Tuesday June 2nd to pour wines accompanied by food from restaurants Milos, The River Cafe, and Convivo, along with an oyster bar.

In addition to the grand tasting, there are several retrospective tastings on offer, including Hirsch and Flowers Pinot Noirs, Dominus from Napa, and Champagne Veuve Cliquot. Unfortunately the event web site does not make it clear how much these tastings cost, nor how many spots are available at them. Apparently you just need to send them an e-mail expressing your interest, which is sort of lame.

Some of the proceeds go to benefit Baykeeper, a non-profit ecological group dedicated to preserving the Hudson-Raritan Estuary.

Tickets are $75 per person and should be purchased in advance online. Those interested in the reserve tastings should click through to the event web site and look for links to “reserve your spot” at the retrospective tastings.