The Chinese Roots of California Wine 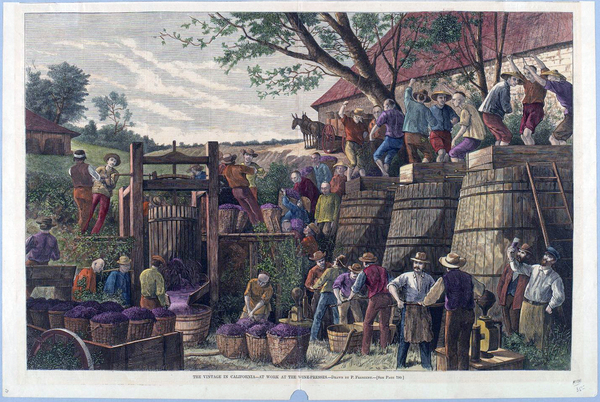 Every time I visit Meadowood in Napa Valley, I find myself spending time in front of a reproduction of an engraving that hangs somewhere in most of their rooms. It is entitled “The vintage in California, at work at the wine presses” and was the work of an artist named Paul Frenzeny in the late 1800’s for Harpers Weekly. Here’s what it looks like (click the image to view it full size):

I probably looked at this engraving half a dozen times before I noticed the details that now make it fascinating to me. In short, most of the people doing the work at this Napa winery are Chinese.

Here in California especially we tend to think about vineyard labor being Latin American in origin. Every news report, book, old photograph, or other story I’ve heard about the early days of Napa viticulture has included the migrant workers from somewhere south of the border.

I was reminded of this image again this week when I read a story in the San Francisco Chronicle that focuses on the Chinese beginnings of the California wine industry.

Indeed, many of the earliest vineyards in the state were planted and harvested by Chinese workers, many of whom came directly from laying the rails of the trans-continental railway, as well as from the immigrant communities surrounding the San Francisco bay area. The city of Napa apparently had it’s own Chinatown at one point.

Heavily discriminated against, and segregated in many ways as a matter of official policy, the Chinese laborers faded from the scene as Prohibition eliminated the majority of their jobs. And now the only traces of the significant impact they had on the beginnings of our wine industry are a few gravestones in a Napa cemetery (most were wood and long since have burned or rotted away), and images like the one above.

Image courtesy of The Bancroft Library, University of California at Berkeley.