One of the main characteristics of Japanese is its vagueness. Language is culture, and Japanese helps people get along in crowded, resource-poor cities by preventing hard feelings in conversation.

Here’s a good example of how this works: In a business meeting, everyone sits around the table vaguely feeling out each others’ position until eventually everyone realizes what they’re expected to say. Thus the first and only vote is almost always unanimous.

Here’s a more frustrating example: I think this sake is named “140” (hyakuyonju) because it’s the 140th attempt at crossing Aomori’s native Hanafubuki rice with the more famous Yamada Nishiki, which doesn’t usually grow so far north.

However, I can’t confirm that; the Japanese describing it is just too vague. All I know is that in the crossing experiments, somehow this rice got the number “140.” Maybe that’s the number of wins Aomori native Daisuke Matsuzaka expects to pile up in Boston. Maybe it’s just a mellifluous number.

As a journalist, I hate that vagueness — it makes reporting anything from Japan a challenge, as you get notebooks full of quotes that, translated, essentially mean, “Maybe so.” I can’t help but wonder, as I struggled to get information on this product, how much Japanese exports would benefit from a trade export organization with English skills.

Oh wait — there is one. I went to JETRO, the Japan External Trade Organization, where I learned the following about Aomori rice:

“The value that is delicious by the security that only the person who ate understands.

Please enjoy it in your mouth.”

OK, at least we know where to put it. Let me tell you what I do know.

Aomori prefecture is the snowiest in Japan — even more so than Hokkaido. Aomori is at the very tip of Honshu, and even in summer it’s foggy and windy.

The prefecture is 66% covered by forest, and the rest mostly by farmland, such that a visiting English teacher posted somewhere on the web, “There’s nothing but rice paddies here.”

Aomori is fairly poor and has been losing population since it peaked in 1983, because young people don’t want to pursue the number one industry — agriculture. When they get 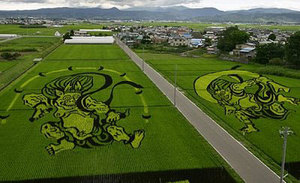 to Tokyo, they have to relearn how to speak, because Aomori is famous in Japan for its unfashionable rural dialect. They also have to learn to have fun, because all there is to do in Aomori at night is carve artwork in the rice paddies — which they’ve gotten quite good at.

Aomori grows 75% of the garlic in Japan and 52% of the apples. It also grows more yam and burdock root than any other prefecture. But we didn’t come here to talk about garlic or burdock root (though we can talk about Calvados if you like).

Nowadays we believe that the best wines come from marginal growing areas — areas that are too cold to guarantee a crop every year. Could it be true for sake as well? There are so many factors in creating great sake that it’s hard to tease out the influence of cool climate.

But Aomori prefecture, with only 1.5 million people, has 45 sake producers. Nishida, maker of this sake, likes the area so much that it uses the Denshu brand just for junmais, and has a second brewery in Aomori where it makes its more famous brand Kikuizumi. And it’s not the only famous name from Aomori, because Momokawa, which has an outpost in Oregon, has its home base there.

Nishida’s Denshu Junmai is one of the most popular junmai sakes in Japan, regularly making local lists of top 10 junmais. The 140 is a more recent product, created in 2003.

Nishida claims over and over that all their Denshu sakes are “handmade.” Here we get back to vagueness — what does that mean? The rice can’t possibly be polished by hand (down to 40%, hence daiginjo) in this day and age. But what the heck, it’s good sake. When it comes my turn, I might prepare to possibly express an opinion in the direction of approval.

In any case, remember to follow the official instructions, and please enjoy it in your mouth.

Tasting Notes:
Aromas of fresh cream, peach, white chocolate and orange pith. There’s plenty of fresh fruit (peach and apricot) up front. You taste a jolt of alcohol (it’s a hefty 17.0%) in your first sip, but then it turns quite smooth, with a long creamy finish. It’s not the most complex daiginjo ever, but it’s rich and smooth and crowd-pleasing.

Food Pairing:
In Aomori they would drink this with seafood stew, but I think it’s fine with miso-glazed cod or other dishes where the creaminess would match the food’s texture.

This sake is difficult to find online. Look for it at your nearest specialty sake retailer.

W. Blake Gray is a former Japan resident whose first wine book in Japanese will be published in August. Please enjoy other writing from him at wblakegray.blogspot.com.