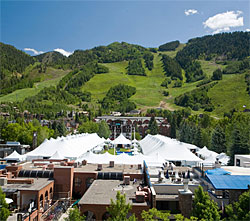 I just returned from a weekend as a speaker at the 27th annual Aspen Food & Wine Classic, the grandaddy of all food and wine festivals. This was my second opportunity to attend the festival as a speaker, and, like the first year, a doubly special honor, as Aspen also happens to be my home town.

DAY 0
I got the opportunity to kick off the weekend’s festivities as the guest speaker at a luncheon for the Aspen Chamber Resort Association. My job was to entertain, to guide the attendees through the wines selected for the lunch, and to thank the ACRA for everything that they do to support the Classic. The ACRA takes responsibility for all the invisible logistics of the festival, including the setup of all the various venues for seminars, the signage around town, the coordination of all the volunteers, among many other things.

The speech was my opportunity to admit my childhood crimes of lying about my age to some of these folks so I could begin earning money to support my burgeoning fireworks habit as an adolescent, and to thank them for not running a background check on me.

My favorite of the wines selected for the luncheon (not by me, but by the sponsors, Wines of Spain) was the 2008 Martin Codax Albariño, Rias Baixas, Spain:

Pale greenish-gold in the glass, this wine has a nose of unripe pears and wet stony aromas. In the mouth it is bright and zingy with lemon zest and mineral flavors that incorporate a hint of wheat in the crisp finish. Score: around 9. Cost: $14. Where to buy?

That Thursday evening, the parties began, of which the highlight was certainly the Wines of Spain party, at “La Casa de Jose Andrés” a house where celebrity chef Jose Andrés and a host of assistants threw a lavish BBQ, featuring whole spring lambs roasted on a spit by the river.

Here’s the (admittedly crappy) image I took of the idyllic scene on my iPhone:

Along with my chorizo sandwiches, lamb crostinis, and roasted lamb lettuce wraps, I drank some very nice Priorat from Viñedos Ithaca, among other things, and discovered a new cheese (Goat aged 5 months) called Abrigo from Valencia.

That evening the most exciting party for me is the Magnum Party, where for most people, the ticket in the door is a magnum of nice wine.

I brought the 2001 Pride Mountain Vineyards Merlot which disappeared quite quickly once it was opened. Good stuff:

Medium ruby in color, this wine has a soft, dark nose of plum, cedar and forest floor aromas. In the mouth it is all plum, with nice balance, barely perceptible velvety tannins and hints of tobacco and black cherry on the moderate finish. More than anything, a pleasure to drink. Score: around 9. Cost: $120 for 1.5L. Where to buy?

Other highlights of that evening:

The Diamond Creek was definitely the best bottle I have ever tasted from that producer, whose wines I often don’t care for nearly as much as most other critics. The Freemark Abbey was of course, a special treat, as it was in pristine condition and simply delicious.

DAY 1
On the first official day of the event, I gave my Cabernet: New from Napa seminar, sharing six wines and their stories with a nearly sold-out crowd of 200 attendees. The wines I poured and discussed with them were (click for my reviews):

The crowd favorites, by a show of hands, were the Hourglass and the HALL wines, but each of the others had their factions of strong proponents as well.

I also had time to attend one other event besides my own, which was the annual Sommelier Challenge, where top sommeliers compete to “sell” wines to the crowd, who then vote on who did the best job.

I was happy to see the young Jordan Salcito of Gilt Restaurant take the trophy at this year’s event. For more details, see emcee Lettie Teague’s blog post about it.

Later in the day I cruised through the main Grand Tasting tent, where I got a chance to try, among other things, some Colorado wines, which was a new and exciting experience for me. While the reds seemed to suffer from lack of ripeness, I enjoyed the 2008 Sutcliffe Vineyards Viognier:

Pale green-gold in the glass, this wine has a nose of peaches, cold cream, and ripe pear aromas. In the mouth it is pleasantly balanced and juicy, with good acid, a a nice texture that wraps around flavors of peach, wet stones, and a hint of lemon curd, all of which finish crisply. Score: around 8.5. Cost: $21 Where to buy?

The first day ended with a party at the top of Aspen Mountain in the Sundeck restaurant, where we arrived to the sun setting on the peaks, a red fox capering about on the grass below the restaurant, killer cocktails, and some nice Italian food.

DAY 2
In addition to giving my Napa seminar again, I gave the first of my Sonoma Superstars seminars, where I shared the following stories and wines (click for my reviews):

Favorites for the crowd were the Flowers, Williams Selyem, and J. Rochioli wines.

I also got the chance to attend two special wine tastings, which will merit their own postings later: a retrospective of wines from BOND estate, and a survey of Giacomo Conterno’s recent wines from the Piemonte.

At the end of the second day, the main event of the evening is the Best New Chefs dinner, where all 10 of the 2009 Food & Wine Best New Chefs make a signature dish for a crowd of well dressed and appreciative revelers. My favorite of the evening was the Uni Ice Cream over Konbu Gelee, by Paul Liebrandt of Corton Restaurant in New York, though I did eat two of the pork belly sandwiches offered by Vinny Dotolo and Jon Shook, of Animal Restaurant in Los Angeles. And of course, with great pride I consumed several meatballs from my hometown talent Nate Appleman of A16 Restaurant in San Francisco.

As a sign of my age, my hipness quotient, or maybe just the effort of speaking in front of about 200 people for a couple of hours, I found myself unable to muster the energy to make it to any of the parties that followed that evening, much to my regret.

DAY 3
The third and final day of the Classic is always a bit mellow, and it began with me sharing my selected Pinots with a dedicated group of about 70 wine lovers who got up and mustered the energy to taste those fantastic wines with me in the morning.

I then had a brief TV appearance, as I was interviewed by CEO of American Express Publishing, Ed Kelly, and Food Network TV personality Sissy Biggers for Plum TV:

I finished the day with some rounds in the Grand Tasting tent, which included the discovery of one of the better Proseccos I have ever tasted (though, if you asked someone from the Prosecco region of the Veneto, they’d be miffed that this wine is referred to as Prosecco, since they’re trying to restrict use of that name to wines made in their region, despite the word being the proper name for the grape variety):

NV Fantinel Prosecco, Friuli-Venezia Giulia, Italy
Near colorless in the glass with fine bubbles, this wine has a mineral, melon-like nose with a bright, almost tangy whiff of freshly baked bread crust aromas. In the mouth it is gorgeously soft with pear and apple fruit, excellent zingy acidity, and a crisp dryness that all combine to lift the spirits. This wine is a lovely sunny day in the bottle if I’ve ever tasted one, and one of the best examples of the use of the Prosecco grape I’ve ever tasted, and more remarkable for being outside the traditional growing region. Fantastic. Score: around 9.5. Cost: $14. Where to buy?

And if that isn’t a good note to end my account of this year’s festivities, I don’t know what is. You certainly don’t want to hear the 9 hour saga of cancelled flights, sprints down the concourse, and missing baggage that capped my weekend.

I hope to see you in Aspen next year!