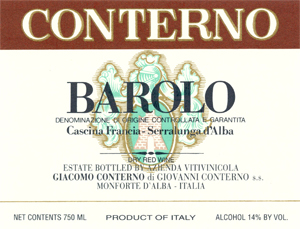 Because of our deep history with wine, the standards by which we judge today’s efforts must be placed within the context of tradition. While we can judge California Pinot Noir on its own merits, we cannot understand or evaluate it completely without reference to Burgundy, its ancestral home. Burgundy will always be the benchmark for Pinot Noir, as it has been for centuries.

Just as there exist regional benchmarks for grape varieties or wine styles, there also exist some individual wine producers, and even individual wines, that manage to define the uppermost limits of quality or the epitome of a regional style.

The wines of Giacomo Conterno can all too easily be defined purely with superlatives. They are arguably the finest wines made in Italy’s Piemonte region, and are often described as the best wines made in Italy. Undeniably, they rank among the top wines of the world regardless of the criteria used to make that assessment, whether by reputation, critical accolades, marketplace demand, or resale value at auction.

Over time Giacomo Conterno has become the standard bearer and even the definition of what “traditional” means in the context of Barolo wines.

The Giacomo Conterno story begins in 1908 when Giovanni Conterno opened what we might these days call a wine bar in the little town of San Giuseppe. In those days if you wanted to have some place where people sat around and drank wine, you had to make the wine yourself. So Giovanni bought grapes from various farmers, and made Barolo, which were kept in small wooden barrels with spigots attached to them next to the bar.

Business kept up during the first World War, but Giovanni had to make do without the help of his son Giacomo who was sent off to fight. When Giacomo returned in 1915, he got right back into the family business, albeit with some new ideas. Giacomo had decided to start experimenting with making wines that were designed to age for a long time rather than the bright, fruity wines they were making for easy and immediate drinking.

That early experimentation quickly lead to a complete dedication to making the slow aging, complex and nuanced wines that Conterno still produces today, including the practice of taking the best grapes every year and making them into a special wine called Monfortino, which he began in 1920.

Giacomo was eventually joined in the business by his two sons, Aldo and Giovanni, though these two would end up having different philosophies about the future of Barolo winemaking. Giacomo’s estate was split in two for his sons, and Aldo went off to start his own winery which has become a standard-bearer in its own right for a more modern style of winemaking in the region.

Giovanni Conterno along with his son Roberto, who continues to make the wines today, would steadfastly continue the family’s traditional methods of winemaking, with one exception. While Giacomo Conterno achieved fame for the quality of his Barolo wines well before the middle of the century, these wines had always been made from purchased grapes. In 1974 Giovanni Conterno decided, reportedly on the advice of his wife and others, that the way to make better wine was to farm the grapes himself. And so Conterno purchased a 35 acre vineyard site named Cascina Francia planted to Nebbiolo and little bit of Barbera. Since that date, every Giacomo Conterno wine has been made from their estate vineyard.

The Cascina Francia vineyard rises steeply up a hillside to a height of more than 400 meters above sea level in the hills of the Piemonte region. It is farmed painstakingly by hand, and if you ask Roberto Conterno about the key elements of his winemaking he will insist that most of his most important decisions are made while the grapes are still on the vine. This includes the annual decision of which blocks of the vineyard will be made into the Monfortino reserve bottling (if one is to be made at all).

True to his word, when the grapes are harvested, Roberto Conterno does very little to them after they are stripped from their stems and dumped into barrels for an extremely long (sometimes up to five weeks) maceration and fermentation using their native yeasts. While the fermentation for the Cascina Francia wine is temperature controlled, the Monfortino wine is always left to ferment at its own pace and its own temperature, sometimes reaching levels that would cause less strong-willed winemakers to panic. But with three generations of family tradition informing his work, Conterno knows exactly what he’s doing.

After fermentation, the wine is poured into barrels where it sits for a long, long time before bottling. But these aren’t just ordinary barrels. In fact, they are perhaps better described as ancient oak oak swimming pools than barrels. The largest of them hold more than three thousand gallons of wine apiece, and are more than 50 years old. These monstrous vats impart literally zero oak influence on the wine and merely allow the wine to develop and mature with a tiny bit of oxygen exchange for the four to ten years that the wine remains in them before bottling.

Conterno’s wines are often considered timeless in every sense of the word — they age effortlessly for decades and they represent a purity of traditional winemaking that has remained remarkably consistent for almost a century.

While I have had one or two Conterno wines before, a tasting at the 2009 Aspen Food & Wine Classic provided me with the opportunity to taste a number of them side by side. Here’s what I thought.

TASTING NOTES:
2006 Giacomo Conterno Barbera d’Alba, Piemonte, Italy
Medium garnet in the glass, this wine smells of orange peels and forest floor. In the mouth it is highly acidic almost, almost too much so at first, but once the mouth settles in it offers lovely orange peel, pine duff, and red fruits in a long, smooth, silky package with virtually no tannins. The flavors linger in the finish but more remarkable is the memory of the texture of the wine. Score: around 9. Cost: $45. Where to buy?

2001 Giacomo Conterno Barbera d’Alba, Piemonte, Italy
Medium ruby in the glass this wine has an incredible nose of wet conifers in the rain mixed with the wet earth and green pine needles at their bases. In the mouth it is amazingly smooth, with a beautiful silky texture and a complex set of flavors that include cedar, orange oil, leather, and redcurrant. The wine has a fantastic finish. Score: between 9 and 9.5. Cost: $45. Difficult to find online.

2004 Giacomo Conterno Barolo “Cascina Francia,” Piemonte, Italy
Light ruby in the glass with orange on the rim, this wine has an amazing nose of wet stones, hints of dried apples and dried apricot aromas. In the mouth it is bright and juicy with fantastic cherry and floral flavors wrapped in soft, suede-like tannins. Complex with hints of spices, exotic woods, and flowers, the wine has an incredible texture and incredible length, soaring, wheeeee, through an airy finish that goes on literally for minutes. Score: between 9.5 and 10. Cost: $145. Where to buy?

2000 Giacomo Conterno Barolo “Cascina Francia” Piemonte, Italy
Light ruby in the glass with hints of orange, this wine has an otherworldly scent of anise, fresh bubble gum, and a sweet quality that eventually resolves to rose petal. Sweet on the palate, with an incredible weightlessness, the wine tastes of silky redcurrant, dried flowers… and…. there’s fruit there, but what the hell is it? Dragon fruit? Something exotic, and incredible aromatics. Light tannins grip the edges of the mouth light a velvet glove as the wine soars through a finish that seems without end. Tasted from a magnum. Score: between 9.5 and 10. Cost: $175. Where to buy?

2001 Giacomo Conterno Barolo “Monfortino,” Piemonte, Italy
Light ruby with orange at the rim, this wine smells of wet stones, old wet wood, and a bright green fruit smell like a ripe guava before it’s cut open. In the mouth it is an unusual combination of power and grace. Brightly acidic with tangy raspberry, redcurrant, and sour cherry flavors, the wine also has a deep resonance and tannic structure that show like a body builders bulk under his clothes. On the finish the wine is airy, and expansive, and oh-so-delicious. Score: around 9.5. Cost: $395. Where to buy?

1997 Giacomo Conterno Barolo “Monfortino” Piemonte, Italy
Light ruby in color with orange on the rim, this wine at first has a faint nose, which over time develops into a compelling combination of floral and mineral aromas mixed with wet wood and dandelion stems. In the mouth it is mineral driven and slightly austere, with flavors of wet stones, wet wood, and a granitic fruit that seems to seethe beneath the surface. This is a brick house of a wine, broad and expansive, but possesses less fruit than I might like at this point. The finish tastes the way my deck smells after a rainstorm, which is to say, excellent. Tasted from magnum. Score: between 9 and 9.5. Cost: $300. Where to buy?