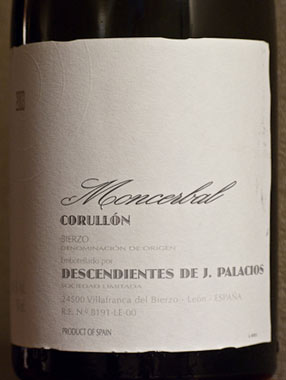 This is one of those wines that I live for. The kind that begins with an unknown bottle thrust in front of me by a friend with a twinkle in their eye, and ends with a profound memory of taste that becomes one of those moments that wine lovers cherish. Such wines are not common, at least not for me, but they are what keep me passionate about drinking and writing and enjoying the world of wine.

Occasionally still described by romanticizing writers as “off in a forgotten corner of Northwestern Spain,” the winegrowing region of Bierzo can no longer be described as truly unknown. While it remains off the radar of most mainstream wine drinkers, this little appellation has gained some attention from wine lovers and wine critics in recent years thanks to a few spectacular wines some of which were made by, and all of which owe a debt of gratitude to a man named Alvaro Palacios.

Palacios is in his early forties, but he has dramatically shaped what we know as Spain’s modern wine industry. The Palacios name has been associated with winemaking in Spain for several generations, and Alvaro eventually decided to continue the family tradition. He studied winemaking in France and went on to work at Chateau Pétrus with Jean-Pierre Moueix. But instead of returning to work on his family’s estate in Rioja he traveled around Spain looking for places where he could make wines of the character and grace he had experienced in France.

Palacios eventually stumbled onto the disused Priorat region, which he singlehandedly proceeded to put on the map, both through evangelization and by example, with wines that have now become some of Spain’s most sought after and most celebrated.

As if completely revitalizing one of Spain’s historical winegrowing regions wasn’t enough, Palacios went on to do it a second time with Bierzo. Known only 10 or 15 years ago for making fruity, innocuous wines of little consequence, Bierzo’s valley floor vineyards were not of interest to Palacios. What caught his eye were incredibly steep schist and shale hillsides where select plantings of the local Mencia grape were still hanging on to life after more than a century.

The rocky soils of the region are apparently both very poor in nutrients, but also quite varied in their composition, especially on the steep hillsides around the town of Corullon. Reminded of the detailed variations in terroir he had observed in Burgundy and Piemonte, Palacios decided this region held the promise he was looking for. Just as he did in Priorat, though this time with his nephew Ricardo Perez, Palacios has snapped up several ancient vineyard sites and transformed them into something magical. The diminutive, scraggly vines, eking out an existence on hillsides of almost solid rock, yield very little fruit, but what they do give under the patient hands of Palacios and Perez is nothing short of astonishing.

Named after Palacios’ father and Perez’s grandfather, Descendientes de Jose Palacios makes an entry level wine named Petales, as well as its flagship bottling known as Villa de Corullon. In addition, however, the winery makes 4 single-vineyard bottlings from the oldest, most extreme vineyard sites around the town. These are named Las Lamas, San Martin, Faraona, and Moncerbal. The winery produces very little wine to begin with, and these single vineyard bottlings are made in even more minute quantities, somewhere between 200 and 400 cases apiece.

The Moncerbal vineyard is a step schist hillside about 2200 feet above sea level. The vines average 80 to 100 years in age and produce less than one ton of fruit per acre. Despite these somewhat austere conditions, Palacios and Perez farm the vineyard Biodynamically. All work in the vineyard has to be done by hand, with occasional assistance by a mule.

The wine is made just as manually, with hand harvesting and hand destemming. The grapes ferment using native yeasts as gently and as long as they need to. After fermentation the wine ages in 100% new French oak barrels and is bottled without fining or filtration.

This is one of the most unique and impressive wines I have had from Spain, and certainly the best from this appellation I have ever tasted. If you can manage to get your hands on a bottle, I highly recommend it.

Tasting Notes:
Opaque, inky ruby in the glass, this wine has a stunning nose of wet stones, black pepper, black cherry, and a vague pruney / leathery quality that emerges with some time. In the mouth it is nothing short of astonishing for reasons that are difficult to describe. This wine offers a mysterious dichotomy between what can only be described as liquified rocks — an earthy mineral backbone that takes the breath away — and a very thick, ripe, black cherry and plum fruit that avoids all trace of sweetness. These flavors actually taste more like the skins of these fruits than the flesh, and the impression of tartness is aided by a remarkable acidity given the ripeness that the fruit must have actually achieved (this was, after all, the year of the deadly heatwave). Overall this wine ripples with muscled power, its tannins glassy-smooth and incredibly sculpted. The finish is minutes long, and resonates with both sides of this wine’s personality — wet stones, and dried cherries. Outstanding.

Food Pairing:
I had this with a pasta in a wild boar ragu, but frankly it would have been better with wild boar morcilla.