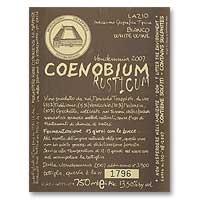 We owe much of modern viticulture and winemaking traditions to the church in some form or another. Even before the last supper’s famous entreaty that gave rise to the concept of Christian transubstantiation, wine has been a sacred fluid that was grown and made by various religious orders who had the land, the time, and the knowledge to make it happen.

In the past, most such organizations were the exclusive domain of men, and consequently so were the wines. Even as various religious orders for women have proliferated, it seems that most of those that make wine (or other forms of alcohol) are still primarily male.

Enter the Cistercian nuns of Monastero Suoro Cisterci near Vitorchiano, about 30 miles north of Rome.

The Cistercian order of the Catholic Church, founded in 1098 and also sometimes known in their modern incarnation as the Trappists, have an ancient tradition of closed self-sufficiency and manual labor according to the Rule of St. Benedict. Their goals of reproducing the religious life of the Italian monk some 500 years earlier meant a diet of hard work in the fields, lengthy prayer and study. Autonomous, self-contained communities of Cistercians have a long history of producing wine, beer, and other spirits.

Which is why a small group of nuns in Italy have an organic vineyard that they carefully tend by hand, planted with Trebbiano, Verdicchio, Malvasia and Grechetto. How these sisters managed to find and enlist the help of Giampiero Bea, the son of famous Italian winemaker Paolo Bea, to make their wine starting in 2005, I have not been able to discover. But despite being some distance from the Bea estate in Montefalco, Giampiero now shows up for every harvest to make their two wines that bear a label of his distinctive handwritten style.

Bea and his father, Paolo, are well known proponents of the Italian school of non-interventionalist winemaking not unlike the so called Natural Wine movement that began in France’s Beaujolais region. That means that this wine, like the rest of the Bea portfolio is made without any commercial yeasts or additives of any kind, sees no fining or filtration before bottling, and only the smallest amount of sulfur added prior to bottling. I’m not entirely certain if it is also fermented without any temperature controls, but I wouldn’t be surprised.

This wine is also an orange wine. Which means that despite being made from white grapes, it is made much more like a red wine, with extended soaking of the juice with the crushed skins of the grapes which gradually impart a deep orange color to the wine. This wine fermented on its skins in stainless steel tanks for 15 days before the liquid was drained off.

Like most orange wines, this extended maceration also exposes the wine to a lot of oxygen, which yields a wine that itself is quite resistant to the effects of oxygen. Not only will the wine last for weeks after opening (if kept cool), decanting for four to twenty-four hours opens it up to its most expressive state.

A coenobium is a colony of a fixed number of cells with little or no specialization, often found in certain kinds of algae. While an odd name for a wine to be sure, the nature of such a colony as a metaphor for both the organic processes of yeast, as well as the nuns who make it all happen seems quite appropriate.

In addition to this “Rusticum” bottling, Bea also produces a straight “Coenobium” bottling which has a higher percentage of Verdiccio and a shorter maceration period, I believe.

Tasting Notes:
Medium copper-orange in the glass, this wine smells of orange rind, honey roasted nuts, and dried cedar boughs. In the mouth it is, like many wines this color, a complex melange of different swirling flavors. Ranier cherry, orange rind, saffron, dried mango, and crenshaw melon all make an appearance. The wine has a firm mineral backbone and wonderful, spritely acidity, and a long, lightly tannic finish that plays out in wonderful aromatics with a hint of salty savoriness. This wine benefits greatly from air, and will reward a full 24 hours of decanting with an even broader aromatic palette and more balanced experience for the tastebuds. Fantastic. Made from 55% Trebbiano, 15% Verdicchio, 20% Malvasia and 10% Grechetto.

Food Pairing:
The lightly tannic nature and robust flavors of this wine, coupled with fantastic acidity make it a great match for nearly any kind of food except charred red meat. I’d love to drink it with a dish of stewed guanciale with scallions over white beans.