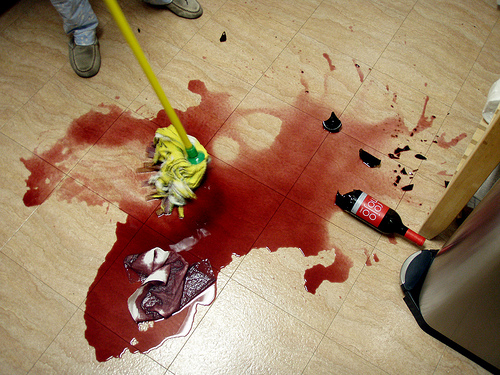 to be alarmist and polemical in their approach to wine, more concerned with their ideology than with the facts. However, there has always been an aspect of their argument about which I have shared some concern: the seeming inexorable consolidation of wine companies into large corporate behemoths. I’ve watched many brands be swallowed up and come out much worse for wear after going through the digestive tract of these beasts, and I’ve watched these massive companies lumber about in the industry crashing into things, and generally making life difficult for wineries, distributors, and retailers.

In short, I’ve always thought these big wine holding companies were unwieldy, but figured, like in so many other industries, that must have been the price to be paid for increasing shareholder value.

But it turns out that outward appearances may have indeed indicated some deeper, more systemic problems, at least in the case of Foster’s Wine Estates, by volume the fifth largest wine company in the U.S.A. and one of the largest in the world.

Earlier this week Foster’s announced that it would essentially undo its previous acquisitions, divesting itself of all its wine holdings (which included giants Beringer-Blass and Southcorp) and essentially wiping its hands of $12 billion dollars to go back to beer.

I’m obviously not a drinks industry analyst, so it’s hard to know what to make of this, and whether it signals anything other than poor management on the part of Foster’s.

However Foster’s is hardly alone. Constellation Brands, the world’s largest wine company has been shedding brands and consolidating divisions in an effort to shore up its balance sheet in this economy, and another large wine company, Ascencia, (that, ironically, was buying up a lot of those brands from Constellation) has been trying somewhat feebly to convince everyone it is not going out of business.

Of course, these are hard times, especially for the wine industry, but in addition, we may be seeing an end of an era, as the giants of the industry crumple under their own weight.

If the global financial crisis coupled with some small fundamental flaw in the idea of super-consolidation in the industry means that we are returning (retrenching?) to a more heterogeneous global wine market, I don’t think there will be many people complaining, except those unfortunate souls who find their jobs (or their wine brands) casualties of the phenomenon.

I guess there’s no such thing as “too big to fail” in the wine business.