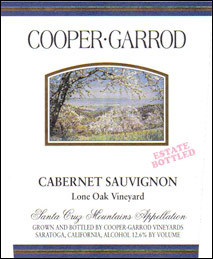 One of the greatest joys in my life remains the feeling I get when stumbling upon a small winery whose name rings no bells, but who produces excellent wines. I don’t know why this is, exactly, but it has replaced the childish joy I used to experience as a young boy when finding a small crystal on a hike, or setting a new personal record for stone skipping on a pond.

Little wineries with high quality wines are like buried treasure, I guess, but these days my goal is not to hoard but to share as widely as possible.

I first discovered Cooper Garrod Vineyards at a trade tasting for the Santa Cruz Mountains Wineries Association. I was making my methodical way down a table of producers and so when I got to the Cooper Garrod table, I dove in, though I hadn’t ever heard of the winery before. About halfway through the lineup of bottles I started to realize that these wines were all well above average in quality, some were truly excellent, and all of them had a personality that spoke of meticulous winemaking with very little fancy technique. By the time I finished all the wines, I was pretty excited. I found myself looking around the room, wondering why everyone wasn’t mobbing the table.

Cooper Garrod Vineyards is a 3,000 case production winery nestled in the hills above Saratoga, California. The winery represents the agricultural legacy of the Garrod Family, who purchased a modest 120 acres of land in 1893 that looked down on the spreading orchards that covered much of what is today known as Silicon Valley. The land they purchased was itself orchard land, and the family settled down to making a living growing apricots and prunes like many of the other farmers in the area.

Exactly 100 years later, the granddaughter of those early farmers, Louise Garrod, along with her husband, George Cooper, established a commercial winery on the property. The farm had been planted with grapevines since 1973 when George, a WWII fighter pilot and NASA test pilot, retired and decided to keep himself busy making a little wine for the family. Cooper was lucky enough to befriend legendary winemaker Martin Ray, who was one of the pioneers of single varietal winemaking in California, and helped establish the Santa Cruz Mountains as a serious winemaking region in the 1930’s and 40’s. With Ray’s help, Cooper became more than competent as a winemaker over the next twenty years, and in 1993, with the help of his eldest son, Bill Cooper, and his nephew Jan Garrod, the family established the small winery that they still run today.

The family estate is planted with 28 hillside acres of completely dry-farmed grapes, a little less than half of which are planted to Cabernet Sauvignon, with the rest split somewhat evenly between Cabernet Franc, Chardonnay, and Syrah with a tiny bit of Viognier and Merlot thrown in. As with many such family operations, the grapes are all picked by hand before being meticulously sorted, destemmed and crushed. They are fermented in small lots, often with “native” yeasts and the red wines are laboriously punched down by hand (a process in which the floating fruit and skins are pushed down into the fermenting juice to circulate air and extract color from the skins) at least four times daily. Most are bottled unfined and unfiltered.

Among other things the winery produces four Cabernet and Cabernet Blends, including this single vineyard wine. All of the Cabernet based wines are released “when they’re ready.” Perhaps influenced by Martin Ray, who was a proponent of extended aging, George and Bill Cooper tend to let their wines sit a bit longer both in oak and in bottle before release. This 2004 is therefore the current release of this wine.

The Lone Oak Cabernet Sauvignon is made from grapes grown on a steeply terraced hillside vineyard that was planted in 1989. The three-acre plot sits at about 1,000 feet of altitude on the eastern side of the Santa Cruz Mountains and faces South, soaking up the sunshine. The grapes were picked in multiple passes through the vineyard, destemmed and then fermented in batches with usual punch-down regime. Secondary fermentation took place in French oak barrels, and then the wine aged for an additional 21 months before bottling, and then another three years in bottle before release.

Cooper-Garrod’s wines are generally made in what most would consider an Old World style. They are restrained rather than brash, and some might even be mistaken for French Bordeaux if tasted blind. Anyone interested in honest wines that are good values and testaments to the quality of modern winemaking in the Santa Cruz Mountains should most certainly seek them out.

Tasting Notes:
Medium to dark garnet in color, this wine has a wonderfully aromatic nose of classic green herbal, cherry, and graphite aromas. In the mouth the wine has a classic bordeaux complexion of pencil lead, cherry, leather, and rich espresso notes. Lovely cherry and unspecific floral aromas float around through the finish. Great acidity and fantastic balance. A mere 13% alcohol.

Food Pairing:
This wine, with its wonderful balance of earthiness and fruit will accompany many things well. I’d love to try it with a gourmet burger and fries. Right NOW.