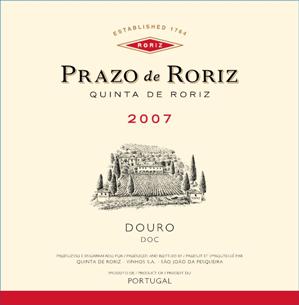 I think one of the greatest assets any wine lover can possess is an unflagging curiosity in the form of a desire to taste as many different kinds of wine as possible. Certainly such an orientation to the wine world provides the basis for the best kind of self-education available to anyone who is interested in wine.

I consciously nurture my own appetite for wines I have never tried before, and whenever possible try to encourage it in others. These days, when I find someone who is interested in breaking out of a rut of Cabernet Sauvignon, Syrah, or Zinfandel I often direct them to the dry red wines of Portugal.

Portugal, of course, became world famous for its sweet fortified Ports, almost to the exclusion of all its other wines. The worldwide appetite for Port casts a long shadow that many of the other wines of Portugal have been trying to squeeze out from under for some time. Vinho Verde has achieved some level of recognition by a certain set of consumers, but the dry red wines, made from many of the grapes that go into the fortified wines, are some of the most under-appreciated wines in the world in my opinion.

I long to visit Portugal’s Douro valley. Judging from my extensive vicarious exploration of it by photograph, it is certainly one of the most spectacular wine regions of the world, with improbably steep, vineyard-covered hills plunging down to the sparkling curves of the Douro river. These serpentine canyons of grapes are increasingly producing red table wines of great complexity, and more importantly for today’s consumer, of great value.

Of course, while it may be new news to Americans, red table wines have been made in the Douro for a long time, and in the case of Quinta de Roriz, for more than two centuries.

Back in 1750 or so when Robert Archibald was wandering around on the hillsides of the Douro river valley, there was no particular protocol for starting a winery. You just found a piece of land and planted some grapes and figured the rest out later. In Archibald’s case the grapes were secondary. The first thing he did was build a wooden box he could hide in to shoot at game. A guy’s gotta eat. But once he had a few wild boar, pheasants, and other miscellaneous varmints in hand, he needed something to go with grilled game. So the vines went into the ground.

By 1764, the bowl-shaped property nestled into the fold of the Upper Douro valley at a big bend in the river had been given the name Quinta de Roriz, and it has been producing wine ever since.

Like most of the historical Douro estates, Roriz has always been known for its Porto, barrels of which graced the docksides of many a European shipping port during the 19th Century, thanks to the unslakable thirst of the continent, and in particular, the English. Roriz was one of the first producers to export its wines to Europe, thanks to particularly enterprising ownership. Starting in 1815, the estate was owned by a member of the van Zeller family until the estate was acquired last year by the Symington wine empire, currently the largest landowners in the Douro.

Quinta de Roriz still produces vintage port, along with three different still red wines, of which this is the most basic. Made up of a blend of 38% Touriga Nacional, 26% Tinta Barrroca, 20% Tinta Roriz, 14% Touriga Franca, and 2% Tinto Cão, it has a classic profile. The grapes come from younger vines on the property. The wine is fermented in stainless steel and then aged for a brief 7 months in French oak before bottling. Roughly 3600 cases are made.

Tasting Notes:
Dark garnet in color, this wine smells of rich blackberry and mulberry fruit, with a dark black cherry undercurrent. In the mouth the wine has a wonderful dry richness and smoothness on the palate, and a brightness thanks to excellent acidity. Flavors of black cherry, wet earth, mulberries, and cassis rumble around through a long finish. Very nice.

Food Pairing:
This wine has a wonderful character to it that will match well with many foods, especially anything with a charred fattiness to it. Crispy pork belly anyone?