In Case You Weren’t Sure About the Global Wine Marketplace 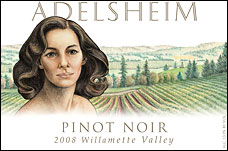 File this story under “You know globalization is at work, when…”

No matter the fuss some people raise about the increasing globalization of the wine industry, the fact remains that there’s nothing to be done about it. It just is. Technology, demographics, politics and economics have shaped the world to the point that even those who would seek to avoid the effects of globalization can no more do so than they can decide to fly by flapping their wings.

And even those that might take baby steps to take part in the global marketplace cannot avoid the sometimes bizarre implications of the ability to sell to anyone anywhere.

Take the startling realization that Adelsheim Vineyards recently came to in the course of exploring international markets for their excellent Oregon Pinot Noirs. As reported in a blog post by Dave McIntyre of the Washington Post, David Adelsheim is having to dramatically change his labels in order to sell his wine to audiences like the British and the Japanese.

For those unfamiliar with Adelsheim VIneyards, for years the bottles have been labeled with artwork done by Adelsheim’s wife Ginny, including wonderful portraits of their daughter Elizabeth, who can be seen growing older vintage after vintage on the succession of labels.

The award winning labels themselves have become as famous as the wines, so changing them was not something to undertake lightly. But apparently if Adelsheim wants to sell his wines to the British, the labels need to look more “French” and if he wants to sell his wine to the Japanese, the girl on the front making eye contact with the buyer has got to go.

I shook my head when I read that, and marveled at the craziness of the world we live in. When a tiny little Oregon winery is thinking about branding to appeal to specific cultural values and buying triggers, you know the world has, in the words of journalist Thomas Friedman, become very, very flat.