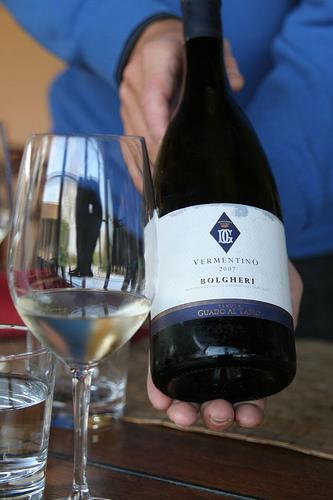 Sommeliers have it pretty rough. They have to deal with the assholes of the wine world who view a conversation with a sommelier as an opportunity to demonstrate their hubris and wine knowledge like a rooster strutting before a cockfight. And then there are those who are not annoying, but still dreadfully unfortunate for a working sommelier: those who are too intimidated by their sense of the complexities of the wine world or the daunting size of the wine list, or what they see as the imposing figure of the sommelier himself (or herself), to engage.

If sommeliers were doctors, they’d spend a good portion of their time dealing with boastfully self-diagnosing patients that had never gone to medical school and people who couldn’t be coaxed out of the waiting room to get examined.

More than one accomplished sommelier has, perhaps not even in a moment of unguarded and slightly tipsy honesty, told me how much they appreciated those diners that actually understood what their job was, and used them in the way they are trained to be used.

But the world is fraught with danger for even the most expert and helpful sommelier. Take Eric Asimov’s article in today’s New York Times, which offers yet another stumbling block in the way of helpful sommeliers everywhere: a story of an astonished diner who is troubled, if not mildly outraged, by a sommelier who tasted the wine first before pouring it for the diner and his companions.

Of course, there will always be people who, unfamiliar with the ceremony and services involved in fine dining, are taken aback by some practices. I can remember my own bumbling and minor frustration as a young man the first time I was taken out to eat in a restaurant where they pushed my seat in for me and placed the napkin on my lap. I didn’t know what was going on, and was embarrassed that I didn’t know.

But the issue raised in Eric’s column is clearly not the product of inexperience. This diner simply wasn’t used to the idea of someone else tasting the wine he had paid for. To him, and doubtless to many others, it’s likely a question of principle: I bought the wine, therefore I should get to decide who gets a sip and who doesn’t. Even my blogging colleague Joe Roberts, of One Wine Dude is on the record in the story expressing some amount of dismay at the idea of a sommelier tasting the wine in advance without his knowledge.

Come on, people. You don’t think the cooks taste the sauce before they put it on your dish? Let sommeliers do their jobs.

I don’t doubt that many people might bristle a little at someone tasting their wine before they themselves do. But I think these same people may not really know what a sommelier’s job is. Now I’m no sommelier myself, but here’s my understanding of what you should expect when there’s a sommelier on the floor of a restaurant you’re dining at.

1. There should be a wine list available for you to look at, that should include a variety of wines by the glass and by the bottle, across a range of price points appropriate to the restaurant.

2. The sommelier has either personally put that wine list together, or is paid to know it almost that well. Which means they should have a sense of how the wines match the menu, the style and character of the wines on it (i.e. how they taste), and of course, what wines they’ve actually got.

3. You can have a conversation with the sommelier if you want, and they will recommend wines to you based on your preferences, your food choices, and/or your budget. They should be able to answer just about any question you have that is relevant to the role that wine will play in your evening’s meal. They should not be there to push any specific wine, sell you wine if you don’t want it, or try to get you to spend more than you really wanted to.

4. On occasion the sommelier’s responsibility will also include matching specific wines to specific dishes as part of a wine flight that goes along with a specific menu created by the chef, or to a menu of your choosing.

5. The sommelier’s job (and the wine director’s if they are different people) also includes making sure that the wine is purchased from reputable sources, stored appropriately, and served at the correct temperature, with proper stemware. The sommelier (or often the waiter, as well) will (always by default, but definitely at your discretion) pour the wine for you and your companions throughout your meal.

6. In states or countries where it is legal, the sommelier will also care for a bottle of wine that you have brought with you to the restaurant to consume, with the same level of attention as any bottle they might be selling you. This includes understanding how and when you wish the wine to be opened and served, and at what temperature.

7. Importantly, the sommelier is also paid to ensure that you get a sound bottle (or glass) of wine — one that is not spoiled, prematurely oxidized, cooked, corked, or otherwise tainted. And this includes that bottle you might have brought with you. (As an aside, everyone should note that this point does not include ensuring that you actually like the wine that you ordered).

It’s this last set of responsibilities that give the sommelier license to, and I might even say the duty, to taste any bottle that they open in the restaurant. And by taste, that means pouring a very, very small amount (half an ounce, perhaps) into a glass or a tastevin to smell and taste before offering the bottle to the diner for evaluation.

Sommeliers are trained or experienced enough, if they are truly worthy of holding the title, to spot flawed wine in ways that even very experienced wine lovers are not. Having them taste a bottle, even if it is one you’ve brought from home, is like having someone who can, in a matter of seconds, check to make sure that the brakes aren’t going to fail in the car you’re about to race off in.

Of course, practically speaking, sommeliers don’t have time to taste every bottle they open in a restaurant, but some are much less in need of professional evaluation before being served. A brand new vintage of California Chardonnay does not need to be inspected in the same way that a 1980 Meursault does. For the most part (but not categorically) screw-capped wines don’t need advanced tasting.

From my perspective, I’d love a sommelier to taste every wine I ever buy at or bring to a restaurant from this day forward. Even if, as it so happened a couple of months ago, all it means is that I can commiserate with them about how badly corked the bottle was that I had brought to dinner. The sommelier tasted it first and then, knowing I’d want to smell, came out to my table with his glass and a grimace. He didn’t have to get the glass within two feet before I could smell how badly corked the wine was. We bemoaned the loss of a great Brunello, and then he was off to find me something to replace it — in my price range, and with the particular style I was looking for.

I know I don’t need to tell many of you readers how to let sommeliers do their jobs. But for some of you, it might be news that it is not only acceptable to have a sommelier take a sip before you do, it might also be a good idea. No one likes to start a dinner with a bad taste in their mouth.

Read the full article in the New York Times.