Book Review: Reading Between The Wines by Terry Theise 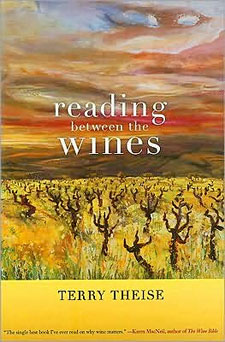 I can honestly say that of all the people in the wine world that hadn’t written books, the one I wished most to do so was Terry Theise. And now that he has? Well, let’s hope he doesn’t stop at one.

Terry Theise is not a name that will ring a bell with the average wine drinker. But to many a serious wine lover, especially those acquainted with the wines of Germany, Austria, and the back roads of Champagne, Theise is a rock star of a wine importer. His portfolio of wines, focused exclusively on those three regions, is one of the most impressive collections of high quality wine under one importer anywhere in the world.

In addition to his wines, I have been enjoying Theise’s writing ever since my friend Derrick suggested that I take a look at one of his catalogs about six years ago. That suggestion was some of the best advice I’ve ever gotten as an aficionado of wine writing. Theise’s catalogs are chock-a-block full of ramblings, rants, humor, and randomness, with a little manifesto squeezed into the nooks and crannies. And most importantly, it’s good stuff — passionate, well written and inspiring.

And now Theise has written a book entitled Reading Between the Wines — a manifesto that attempts to distill a response to the question: why does wine matter?

His answer reads like a philosophical treatise dipped into a soup of gonzo journalism that has substituted wines of terroir for hard drugs, and (temporarily) sworn off expletives in favor of poetry.

Theise begins his ruminations with an introduction that relates the amusing history of his own introduction to wine, complete with the confession that the first wine he ever really liked was Blue Nun (!), an hysterical irony given his current portfolio. The first few chapters, like delicate layers of wrapping paper around a morsel of goodness, gradually expose the heart of Theise’s book, which for me is captured in a brief chapter entitled “Remystifying Wine.”

Wine, Theise passionately proclaims, needs the opposite of dumbing down. It needs to be understood as complex, as undefinable, as even mystical. Yet in the same breath Theise argues that wine is important and meaningful precisely because, in those moments when we appreciate it fully, our appreciation comes not from understanding wine as a calculated sum of its parts, but as something grasped with intuition and with our soul.

Throughout the rest of the book Theise ruminates with his own particular blend of articulate wit on many things central and tangential to the most philosophically charged aspects of wine, from the value of scores, to the meaning of terroir, to the aspects of wine that make it so pleasurable. He offers a paean to his beloved Riesling and pens minor adorations of Scheurebe, Chenin Blanc, and Nebbiolo. He tells wonderful stories about some of his favorite producers, and ends the book with some vignettes of his experiences with some of the most profound and meaningful wines in his memory.

While it lacks a plot, resembles a rambling conversation more than a thesis, and has less of a narrative arc than a wild spiral of thought, Reading Between the Wines offers something both more rare and more important in the world of wine writing: fervent, infectious passion. There are very few wine books indeed that evidence even a portion of the energy that the attentive reader can’t help but feel vibrating off the pages of Theise’s book.

In a world where much wine writing consists of stale, clinical sound bites by old white men, Theise’s barely contained fervor, enthusiasm, and wonder are as inspirational as they are precious.

This book is not for everyone, but even as much as that is true, I wish everyone would read it. Terry Theise, perhaps more than any other person, knows how to convey in words just how magical wine can be, and the world needs more of that. For anyone who has reached that point in their relationship with wine, where a sip of the right stuff is able to produce a quickened pulse, a glint in the eye, or a gasp of amazement, this book is all but required reading.