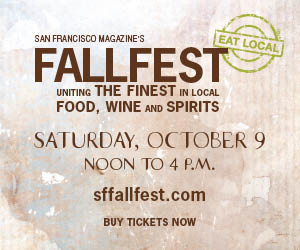 Once upon a time in this country, back when we didn’t buy our food and instead we grew it, Autumn was a time for celebration. If we were lucky, or good at farming, we’d be able to celebrate a bountiful harvest of food that might sustain us through the winter. Other than our Thanksgiving holiday, which isn’t so much a harvest celebration as much as it is a commemoration of not starving to death thanks to the charity of Native Americans, we don’t have much of a national tradition in this country of celebrating the harvest.

Elsewhere in the world such celebrations marking the end of the growing season are much more common, and especially in countries and cultures where there still IS an important harvest.

While not necessarily conceived as a replacement for such festivals, the annual SF FallFest is an easy proxy for city dwellers who would like to celebrate the blessings of food and wine we are so privileged to possess here in San Francisco. And what better way to count those blessings than to eat and drink locally, while helping those less fortunate get a chance to eat good meals as well?

Run by San Francisco Magazine and benefiting Meals on Wheels of San Francisco, FallFest is consistently one of the better run food and wine events I attend every year. The event features lots of booths handing out free wine and free food, along with cooking demonstrations, wine tastings, live music, and various other displays of consumer enticement.

Most importantly, the food and wine are actually good. The restaurants that participate are places you’d want to go eat (if you could get a reservation), such as Spruce, Bar Bambino, Heaven’s Dog, etc, and the wineries that pour are mixed, but always include some good producers. Some of note that will be there this year include Harrington, Renaissance, Macrostie, Deloach, Adrian Fog, Grgich Hills, Qupe, and more.

If you enjoy food and wine, and have an afternoon to kill on Saturday, October 9th, FallFest is a nice way to spend a few hours, and certainly worth the $95* ticket, especially if you arrive early and hungry. And considering that you can get a $15 discount on your tickets for being a Vinography reader, you really have no excuse.

Tickets cost $95 in advance, $110 at the door. You can get $15 off with the promo code: VINOGRAPHY (code expires 9/27) if you order your tickets online In past years (and better economies) the event has sold out, so getting tickets in advance is recommended.

Some advice for those attending: when it’s sunny it gets quite hot in the plaza. Bring sunscreen and a hat and drink lots of water. Or, of course, it could be foggy and cold as hell. But that has actually never happened at this event, so if we all cross our collective fingers….

Embarcadero Center can be easily reached by all Bay Area public transportation options, including Bay Area Rapid Transit (BART), Muni bus, underground Muni, ferry, cable car or the F-Line streetcar. For those who want to drive, underground garages are located in One, Two, Three, and Four Embarcadero Centers.