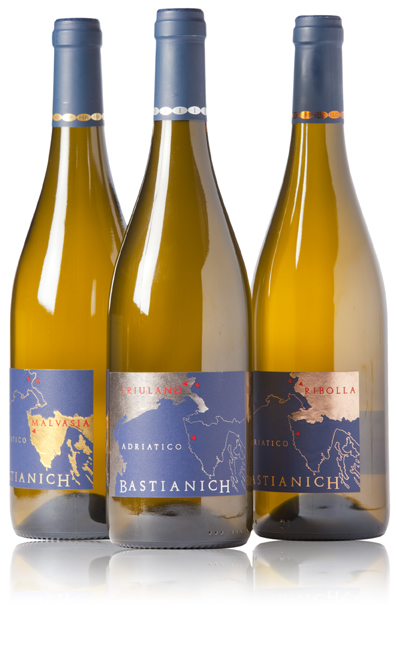 Celebrity wines cause most serious wine lovers to cringe. Despite the immediate tendency to dismiss such wines as vanity projects with little substance, a lot of celebrity wines are fairly good, if only because making good wine can sometimes take a lot of money.

If we didn’t have the food network, and the 21st Century foodie craze sweeping across America, very few people would have any idea who Joe Bastianich is. While he may stay off the red carpet and let his partner Batali (and his mother a famous television chef from the Julia Child days where most of the cooking was on public television and a restaurateur herself) face the paparazzi, Bastianich is a superstar of today’s East Coast wine and food scene.

The co-owner of no less than (by my count) seventeen successful restaurants, many in conjunction with Batali (including the one that made them both famous, Babbo) Bastianich has distinguished himself as a master restaurateur with a knack for nailing restaurant concepts from fine dining to casual eateries.

The 43-year-old Bastianich, who was born and grew up in Queens, New York, has long been a serious lover of wine, and in particular, the wines of north-eastern Italy and neighboring Slovenia. Wine featured prominently at his very first restaurant, Becco, which he opened at the age of 23. Quite radically for the time (and frankly even still today) the wine list featured over one hundred Italian wines, none priced higher than $15 a bottle.

But what would you expect from a kid who, according to a nice profile of Bastianich written by Lettie Teague in 2004, spent the year before opening such a restaurant working in the vineyards of Friuli-Venezia Giulia? Despite the star-studded wine cellars that Bastianich has managed to put together for his top restaurants in New York, he seems ardently focused on making wine as accessible as possible to his customers.

In 1997 Bastianich purchased a choice parcel of land in Friuli, and opened an eponymous winery, Azienda Agricola Bastianich. He has subsequently opened one in Tuscany, one in Mendoza, Argentina, and more recently purchased a winery in Piedmont, Italy.

Azienda Agricola Bastianich exists for two reasons: Bastianich’s love for the region, and his fervent desire to evangelize what he calls the “Super Whites” of the region, blends of several of the native grape varieties that are among some of my own favorite wines in the world.

This winery is no dilettante’s project. It’s a serious operation that makes some exceptional wines, some of which have earned the coveted Tre Bicchieri award from the Gambero Rosso guide in Italy, the highest achievement for an Italian winery.

Bastianich has also recently begun to use the winery as the seat of production for a series of wines that pay homage to the greater wine region surrounding Friuli, which despite being carved up by several international borders, has long been a source for some of the world’s best white wines.

This new series of wines, named “Adriatico” are a daring attempt by Bastianich to do two important things: expose Americans to the native grape varieties of the area, and to do it affordably. I’m pleased to say that from my perspective, the wines are a remarkable success.

The series consists of three wines, a Friulano from Italy, a Ribolla Gialla from Slovenia, and a Malvasia Istriana from Croatia. Each wine is made by a different winemaker from the region, and all three are fermented and aged in steel, with a focus on letting each grape variety speak for itself.

The Friulano comes from fruit purchased from vineyards around the villages of Buttrio, Manzano, and Cividale in Italy’s Collio Orientale di Friuli, and is made by the Bastianich winemaker Emilio de Medicio. The Ribolla Gialla comes from Medano, Jordano in the Brda region of Slovenia, and is made by one of the region’s great winemakers, Marjan Simcic. The Malvasia comes from vineyards only a few miles from the Adriatic in the little villages of
Buje, Umag, and Porec. It is made by a trio of Croatian winemakers that I haven’t ever heard of, which isn’t saying much (Matosevic, Degrassi, and Kozlovic).

While these wines do not represent the pinnacles of their grape varieties, they’re fantastic for $15, and I’d be happy to drink them any night of the week. For anyone who’s interested in branching out to try new grape varieties (always a good idea) or someone who wants a great every-day drinking wine, I highly recommend them.

Bastianich continues to be a great ambassador for the world of wine, and has even started to make some TV appearances of his own, as a judge on Fox’s MasterChef program. One day, when there’s finally enough money in a star studded show about wine (yeah, I know, just wait for it) perhaps we’ll see Bastianich fully in the spotlight.

2009 Bastianich “Adriatico” Friulano, Colli Orientali del Friuli, Italy
Palest greenish gold in color, this wine has a nose of slightly sweet peach and pear aromas. In the mouth peach and lemon flavors mix with vanilla and nutty flavors that linger in the finish. Softer acids than I would like, but the wine has a delicate quality that is to be admired. 13% alcohol. Score: around 8.5. Cost: $15. Click to buy.

2009 Bastianich “Adriatico” Malvasia Istriana, Istria, Croatia
Pale greenish gold in color, this wine smells of cold cream, lychee, and poached pears. In the mouth it is silky and smooth, offering flavors of apple, pear, crème anglais, and a faint wet wood flavor on the finish. Nicely balanced. Distinctive and tasty. 13% alcohol. Score: between 8.5 and 9. Cost: $15. Click to buy.

2009 Bastianich “Adriatico” Ribolla Gialla, Brda, Slovenia
Light gold in color, this wine smells of wet stones, baked apples and roasted nuts. In the mouth, flavors of roasted nuts, wet stones, bergamot and exotic spices swirl in a satiny stream across the palate. Flavors of incense and citrus linger in the finish. 13% alcohol. Score: between 8.5 and 9. Cost: $15. Click to buy.