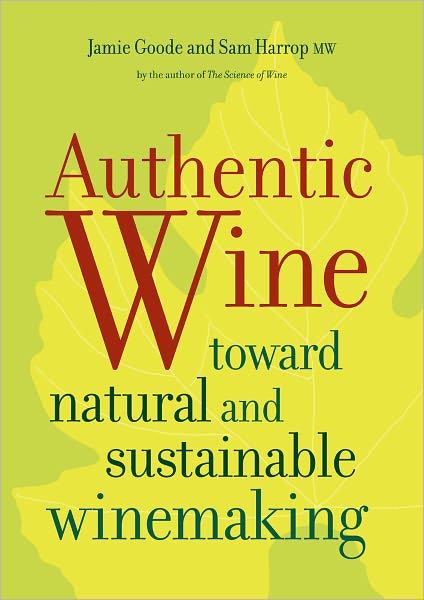 Alongside the profusion of wine bars and wine weeks focused on so-called “natural wines”–wines made with minimal winemaker intervention and chemical adulteration– two new books try to explain the phenomenon and assess its significance for the future of wine.

In Authentic Wine: Toward Natural and Sustainable Winemaking, British scientist / wine writer Jaime Goode and New Zealand-born consulting winemaker and Master of Wine Sam Harrop make a plea for maintaining and defending the diversity of wines and wine styles from around the world, concentrating on careful, in-depth analysis of the technical and philosophical issues involved. Alice Feiring’s Naked Wine: Letting Grapes Do What Comes Naturally is largely about Alice Feiring, but also advances the case for natural wine through a series of encounters with the fascinating international cast of characters who make these edgy wines.

The difference between the two approaches might be summed up with the first few sentences of each book.

From Goode and Harrop’s Preface:

“We believe that wine is special, and one of the things that make it special is that it is, in essence, a natural product. We argue that this naturalness is important for wine, and any attempt to make wine less natural by allowing winemakers greater freedom to make more additions could severely damage the image of wine and its continued specialness. Indeed, it is not a huge exaggeration to suggest that we are at a crossroads in the history of wine. In the worst-case scenario, wine becomes increasingly industrial and manufactured, a homogenized mass with only a tiny niche of authentic wines remaining, the preserve of only a few lucky souls who can still access them. In the best-case scenario, the wine trade embraces and celebrates the fact that wine is a natural product and takes steps to preserve its diversity and authenticity–steps that will ensure healthy growth and development of the market for wine.”

“When it comes to wine, I can be polarizing. I don’t mean to be; I just have unnaturally strong opinions. Take, for example, the supposedly provocative notion, “Why add anything to wine that isn’t necessary?” Though barely five feet tall, nearly one hundred pounds, that query, out of my lips, can spark forest fires of controversy, inciting far larger people to do battle with me. Yet having resigned myself to this sad state of affairs, I persist, because as Eleanor Roosevelt said, “Do what you feel in your heart to be right, you’ll be criticized for it anyway.”

This appears to be the first time in the history of wine writing that the Eleanor Roosevelt card has been played.

Goode and Harrop originally intended to title their book Natural Wine. They abandoned that name both because “natural” in this instance is virtually impossible to define and because their real concern was something broader than cellar techniques. 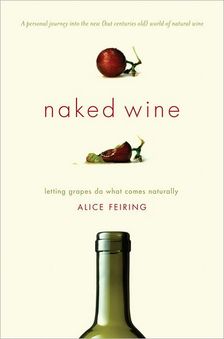 While more natural and less industrial winemaking is a direction they endorse, their real passion is for place–for terroir–for a cornucopia of wines that reflect their grapes and origins and regions in authentic ways. Beyond the use or non-use of sulfites and packaged yeast, authenticity for them also involves sustainable farming and winemaking practices; reasonable (i.e., non-stratospheric) ripeness levels; an absence of serious faults; and a concern for environmental issues and wine’s carbon footprint.

The book includes detailed but entirely readable technical overviews of issues in the controversy about what is and is not “natural”: vines grafted onto specialized rootstocks versus vines on their own roots; the role of sulfur dioxide; wild versus cultivated commercial yeast; the wonderful world of enzymes, filtration, and so on. A substantial chapter looks into common wine faults, where they come from, what can be done about them, and how much of any “fault” is really a fault. For anyone who wants to understand the innards of these issues, this book is a fine place to start.

In between the authors’ treatments of wine production issues are long sections of interviews with growers and winemakers who are experimenting with more natural / less chemical methods–spontaneous fermentations, avoidance of sulfites, and vineyard management without herbicides and pesticides. The authors and their informants are not always on the same page, which makes the book all the more interesting; the chapter which includes enthusiastic reports from several biodynamic grape growers, for example, also summarizes scientific research indicating that biodynamics does nothing to improve wine quality.

Rather then providing simple answers, most of the discussions pose interesting questions. A whiff of barnyardy Brettanomyces, for example, might improve a wine for some tasters; but a lot of wines with significant Brett levels all end up tasting the same. Lowering the alcohol of a finished wine with reverse osmosis, a fancy form of filtration, seems like the ultimate manipulation. But what if a grower gets caught by late season heat spikes, which run up the sugar, which runs up the alcohol; and what if lowering it back down helps the wine reveal its place of origins much better?

Overall, the book is quite pragmatic, realistic, balanced and informative. It’s not a polemic; indeed, Goode and Harrop criticize the more ardent naturalistas at several points for adopting a hard ideological tone that simply drives most of the industry away. The authors are perfectly passionate about the fate of wine, but more interested in what kinds of improvements can be made than in some set of doctrines that have to be followed.

Which gets us to Naked Wine and its “polarizing” author. Feiring is one of the most prominent advocates of natural wines and winemaking, and has been known to make less than flattering comments about wines made with techniques of which she disapproves.

In this volume, she goes straight to the source. Feiring’s book is organized as a travelogue, a series of visits, dinners, lunches, and bottle drainings with a multi-continental Who’s Who of natural winemaking in France, Spain, Italy and California: Eric Texier, Nicolas Joly, Marcel Lapierre, Jacques Néauport, the Coturris from California, and many more.

Many of these encounters make for good reading, and it’s clear that Feiring had a good time on her self-assignment. More often than not, greater space is devoted to detailing her adventures and inner dialogs than to profiling her subjects; Goode and Harrop probably devote more pages to what their interview subjects tell them than Feiring does.

A second thread runs through the book, and actually presents its opening drama. Challenged to make some wine according to her well-known preferences, Feiring eventually teams up with veteran Sonoma winemaker Kevin Hamel and grower Ridgely Evers to have a go at a batch of Sagrantino, a grape variety from Umbria with intriguing flavors and terrifying tannins.

Feiring doesn’t quite make the wine–Hamel does–but her involvement includes picking some of the grapes (not nearly as efficiently as the Mexican field hands, whom she seems to resent for being faster); deciding to go with no sulfur dioxide and only wild yeast; and spending parts of several days foot-stomping the whole clusters of grapes in the fermenter.

After her first treading session, Feiring rinses off, and reveals that the process has exfoliated her legs and feet. Talk about “natural” wine. If there were awards for too much information, this passage should surely be nominated.

Throughout her quest, Feiring’s operating definition of natural winemaking is “nothing added, nothing taken away.” It turns out, of course, that reality is more complicated; her heroes all have different ideas about winemaking practices, and almost all of them from time to time add something–small amounts of sulfur, commercial yeast in a pinch–or maybe even take something away. The technique of carbonic maceration advocated by Beaujolais natural pioneer Jules Chauvet–in which whole grape berries ferment themselves with internal enzymes, not yeast–turns out largely not to be used by his own followers. One winemaker after another tells Feiring, “there is no recipe.”

Her Sagrantino hits its first bump when it becomes clear that the high sugar in the grapes will produce a high-alcohol wine, which no one involved in the project wants. Feiring agonizes about the possible addition of water, which Hamel goes ahead and administers. Not mentioned in the book, but included in the winemakers notes on the DaVero website, where the wine, exfoliation and all, is listed for $95 a bottle, are “a touch of sulphur for stabilization” and a light fining “with two organic egg whites from our very own chickens.”

By the end, Feiring is more or less content with wines that are “natural enough,” a concept that is probably much more realistic and, hopefully, not as contentious as the more dogmatic approaches to natural wine. She concludes her California chapter, the last in the book, with the rather abrupt claim that, “gauging from those embracing the wine equivalent to slow and thoughtful food, it is clear: We have liftoff.”

Feiring is still pinning her hopes, or at least her attention, on a tiny minority of winemakers, daring souls whose total production is less than what many mega-wineries spill in a year. Goode and Harrop, on the other hand, hope to move the mainstream wine industry toward something more natural, even if it might not be “natural enough” for Feiring. Their project isn’t nearly as romantic, but it might well be more important.