The States of Wine Shipping 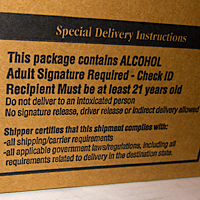 ‘It will cost the economy thousands of jobs.’
‘It will reduce tax revenues and destroy retailers.’
‘It will result in an epidemic of teen drunk driving.’

These were but a few of the vociferous arguments made on 5 January against a bill introduced to the New Jersey state legislature that merely proposed to allow New Jersey state wineries (of which there are now more than 40) to ship their wines to state residents, just like wineries in the neighbouring state of New York. The individuals offering these arguments were primarily representatives of the state’s liquor wholesalers, who purportedly spent more than $1 million trying to prevent this legislation from coming up for a vote.

Welcome to America, where for 25% of the households in the country, it is easier to purchase guns than a bottle of wine on the internet thanks to the laws of the states in which they live.

To buy wine in Pennsylvania, for instance, you’ll have to make your way to a liquor store run by the state government, with a selection driven more by bureaucracy and the whims of distributors than by any sense of what consumers might want….