Wine, Rap, and the Power of Product Placement 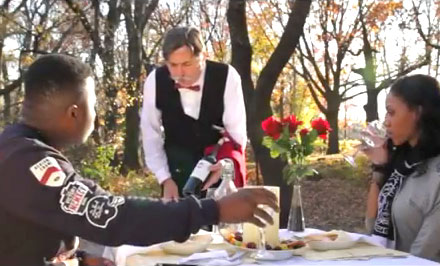 comes out that glorifies the grape, and sales shoot through the roof.

Rap may well be the best thing that ever happened to Cristal champagne, or, perhaps according to them, the worst. Rapper Jay-Z and others were constantly weaving the $250 champagne into their lyrics (and serving it at the clubs they owned), and sales predictably skyrocketed. But then in 2006 Cristal implied in not so many words that they were less than thrilled with the association, and Jay-Z publicly denounced the brand and started rapping about Krug and Dom Perignon.

But only for a little while. He soon had a new favorite bubbly, called Ace of Spades, produced by Armand de Brignac, which looked tailor made for the part of being swung about in a rap music video. I took one look at the gaudy bottle and assumed he had chosen it more for the packaging than the wine. But it turns out that this wine may well be the single best cross promotional marketing idea in history.

According to a little bit of investigative journalism published last spring in the Atlantic Monthly, there is a very good probability that Jay-Z (or his brand handlers) may have come up with the Ace of Spades brand out of thin air. If not, they may have at the very least, brokered a deal with the producers to profit handsomely from the spike in Ace of Spades sales as a result of Jay-Z’s newfound appreciation. Product placement 101.

Of course Champagne is now yesterday’s thing, having been bumped out of the limelight these days by the most unlikeliest of contenders, Moscato di Asti. I personally believe that’s simply because the wine does a nice rhyme with “nasty.” But the real question, of course, is whether Jay-Z has prudently invested in Moscato, or whether rappers like Nelly have simply taken a page from Jay-Z’s playbook by releasing their own branded versions.

For anyone who prefers their pap a bit more red, there’s always Troy Ave’s Merlot [Note: explicit lyrics]. Who wants to put money on the fact that Kendall Jackson knew better than to object?