Tasting the World at ProWein 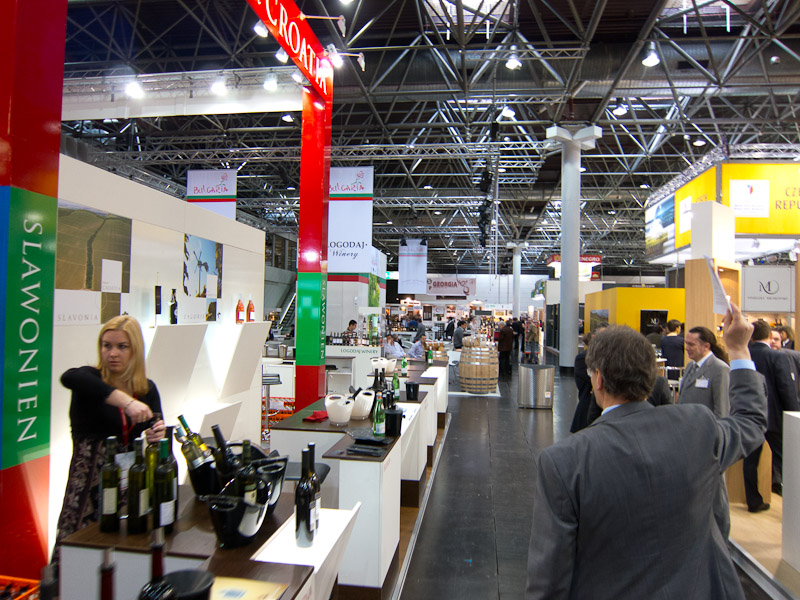 , Germany’s largest wine exhibition, to find that German wines were in the minority. What I expected to be one large (but doubtlessly well organized) German wine love-fest, was in fact a stupendously large, and (supremely well organized) international wine fair of gigantic proportions, with wine regions from all over the world very well represented. It’s not the largest wine exhibition in the world, but the way it continues to grow, it’s only a matter of time before it can easily make that claim. In the mean-time, it will simply be one of the largest wine fairs in the world, and by far the most cosmopolitan. Where other giant shows like Vinitaly and Vinexpo are made up primarily of wines from the host country (Italy and France respectively) ProWein plays host to 3930 exhibitors from 50 different countries, with significant presence from Austria (who have their own entire hall), France, Italy, Spain, South Africa, New Zealand, Argentina, Chile, Portugal, Brazil, Israel, and many more.

Consequently, my plans to immerse myself for three days in a bath of German Riesling shifted a bit. I did my share of tasting German wines, but I decided to spend a good portion of my time tasting through wines that I would ordinarily not have a chance to experience.

In short, I decided to give my palate a few lessons in obscurity. For the first day or so, I went around tasting wine from countries and grapes from as many tiny, off the beaten path, or remote locales as possible. I assailed my tastebuds with the likes of Fateasca Alba, Mavrud, Kalecik Karasi, Mtsvani, Kujundzusa, Negru de Dragasani, Marastina, Rara Neagra, Saperavi, Zelen, Novac, and more. I don’t know about you, but that was my idea of a good time.

The wines weren’t always great, and I was sad to see many countries pouring mostly international grape varieties. But there were some gems to be found.

Here are some of the countries I explored and the wines I tasted.

REPUBLIC OF GEORGIA
I’d recently tasted a bunch of Georgian wines back in the states, so I wandered around looking for qvevri wines (those made in giant terra cotta vessels — don’t call them amphorae — buried under ground). These wines are the original “orange” wines, where white wines are made like red wines, with long skin maceration that turns them a nice iced-tea color. To date, I had not had a bad one, but I quickly learned that not every qvevri wine is guaranteed to be good. Some were downright awful.

BULGARIA
I wandered around Bulgaria’s sizeable stand for several minutes before I managed to find any wines made from indigenous grape varieties. With more than 40 wines on offer, only one or two even contained an indigenous grape, and there wasn’t a single wine made exclusively from a Bulgarian grape. I did find a blend of the local grape Mavrud and Cabernet that was quite tasty, though, with real personality.

2010 Mezek Red Blend, Thracian Valley, Bulgaria
Medium ruby in the glass, this wine smells of cherry and wet dirt. In the mouth aggressive tannins wrap like stiff leather gloves around a core of dark cherry and cedar flavors, with an undercurrent of moist soil. Good acidity. The fruit is pure, and with a little time, the tannins may relax their grip. A very nice wine with personality. Score: between 8.5 and 9.

CROATIA
I’ve tasted through a bunch of Croatian wines before, and have come to love many of the country’s white wines, especially those made from Malvasia so I didn’t spend a lot of time there, but I did find a bunch of lovely wines.

2010 Vinarija Skaulj “Nadin” White Wine, Northern dalmatia, Croatia
Light gold in the glass, this wine smells of honey and ripe apples. In the mouth flavors of chamomile, apples and grapefruit pith take on a waxy character. Bright acidity and a fresh quality. Tasty. Score: around 9.

2010 Veralda Istarska Malvazija, Istria, Croatia
Pale gold in color, this wine smells of bright apple and wet stones. In the mouth the wine is quite mineral, with crisp lovely green apple and stony rainwater flavors. Great acidity, and a tiny tannic grip. Score: around 9.

2008 Roxanich “Antica” Malvasia, Istria, Croatia
A medium cloudy orange in the glass, this wine smells of sweet dried orange peel and lemons. In the mouth flavors of pink grapefruit and dried herbs mix with lemony goodness while being caressed by lovely tannins. The wine has great acidity and fantastic length. Out standing. Score: between 9 and 9.5.

THE CZECH REPUBLIC
I tried a number of different wines from the Czech Republic and wasn’t particularly impressed, though I was interested by a grape called Palava, which is a cross between Gewurztraminer and Muller Thurgau, and which is named after a particular wine region.

2010 Pavlou Palava, Czech Republic
Pale gold in the glass, this wine smells of wet stones and golden delicious apples. In the mouth flavors of golden apple and wet stones have a cold cream floral quality to them but are a little flat and one dimensional. Decent acidity. Score: between 8 and 8.5.

TURKEY
The Turkish wine delegation was in full force, with an impressive booth that seemed fairly busy the whole time I was there. I’ve recently tasted through a bunch of Turkish wines, so again I concentrated elsewhere, but I did stop to taste through a few wines, in particular the wines of producer Vinkara, which were fairly in line with my experiences of other Turkish wines. I preferred the whites to the reds, which tended to have too much oak for my taste. In particular I enjoyed a wine called “Narince” from Vinkara that was a pretty, quaffable white.

SLOVENIA
I happen to love Slovenian wines, and I knew a few of the producers there, but like Croatia, I didn’t spend a lot of time there since I had some familiarity with the region. I did however discover a fabulous producer there, a young wine label called Burja whose entire portfolio was excellent. In particular I loved a wine he made from a grape called Zelen, which is the pride and joy of the upper Vipava valley in Slovenia.

2011 Burja Zelen, Vipava Valley, Slovenia
Light greenish gold in color, this wine has a wonderfully perfumed nose of white flowers, green apple, and cucumber aromas. In the mouth flavors of lime zest, apple and wet stones burst with bright acidity. Floral notes emerge on the finish. Light on its feet, and quite delicate, this is a beautiful wine. Score: between 9 and 9.5. Cost: $20. click to buy.

ROMANIA
There were probably two dozen or so wineries attending from Romania, and I wasn’t particularly impressed with the wines, many made from local grape varieties, until I encountered a producer called Prince Stirbey, whose wines were excellent, and fairly head and shoulders above the others in terms of quality. The estate’s German winemaker Oliver Bauer gave me a great little lesson on the wines of the country, and impressed me with his passion for the region. His reserve Fateasca Regala was extraordinary, and his reds from the Novac grape showed great potential. It was also interesting to taste a grape called Tamaioasa Romaneasca which was in the Muscat family.

2007 Prince Stirbey “Genius Loci” Feteasca Regala, Romania
Light gold in the glass, this wine smells of white flowers, apples, and pastry cream. In the mouth, flavors of lemon curd, white flowers, and rainwater burst with juicy acidity while remaining quite sexy and silky on the tongue. Mouthwatering yum of a wine which gets more complex the longer it sits in the mouth, with faint tannins that creep up while you’re not looking. Score: between 9 and 9.5.

MONTENEGRO
I found the people from Montenegro pretty pushy, but I was intruigued to taste the wines from their local grape Vranac. This little country claimed to have the largest contiguous vineyard in the world in it (I think they said 2300 hectares or something like that). Most of the younger Vranac I found to be overly tannic, with too much oak on it. But they broke out an older bottle for me that was quite pleasant.

2000 Plantaze Vranac, Montenegro
Dark garnet in the glass, this wine has a creamy smell of cassis . In the mouth smooth tannins wrap around flavors of brown sugar, wet wood, and cassis. The creamy quality persists in the texture of the wine as well as its flavors. Quite unusual. Score: between 8.5 and 9.

MOLDOVA
Moldova had many wines on offer, but very few that were anything but the usual international suspects. I got a chance to try one wine that had some of a local grape variety called Rara Neagra in it, along with Saperavi and Cabernet. It was pleasant enough, but not particularly notable.

CHINA
I was sad to see very few wines from China at the fair, but it is also possible that I just couldn’t find them, as they did not seem to be consolidated in one place, but scattered amongst several importers’ booths. There were certainly Chinese buyers roaming the halls, though. Changyu, one of China’s more prominent wineries was pouring its Cabernet Gernischt, which is an obscure clone of Cabernet Franc, apparently.

2010 Changyu Cabernet Gernischt, Ningxa, China
Dark garnet in the glass, this wine smells of wet stone, earth, and a hint of green bell pepper. In the mouth smooth tannins wrap around flavors of cherry and green bell pepper, mixed with wet stones and wet earth. A dead ringer for Bordeaux. Score: around 8.5.

LUXEMBOURG
My big international discovery for this fair was the wine of Luxembourg. Pretty much everything I tasted at the Luxembourg booth was good. They tend to grow Alsace grape varieties and Burgundy grape varieties, producing dry, sweet, and sparkling wines from them that are really interesting.

NV Domaine Henri Ruppert Cremant de Luxembourg “La Brut”
Light blond in the glass with fine bubbles, this wine smells lightly yeasty with a crisp mineral undertone. In the mouth bright flavors of apple and pear meld nicely with a salty-buttery Saltine cracker quality. A beautiful soft mousse fills the mouth leaving behind a floral perfume. Quite pretty. Score: around 9.

I can’t tell you how fun it was to wander through the halls tasting these wines and meeting wine folks from all over the world. Sadly both the Serbian and Bosnian booths didn’t seem to be occupied, and I probably missed a few obscure countries while I was at it.

More to come from my days at ProWein.