The Beauty of Blaufrankisch: Tasting Wines from Leithaberg, Austria 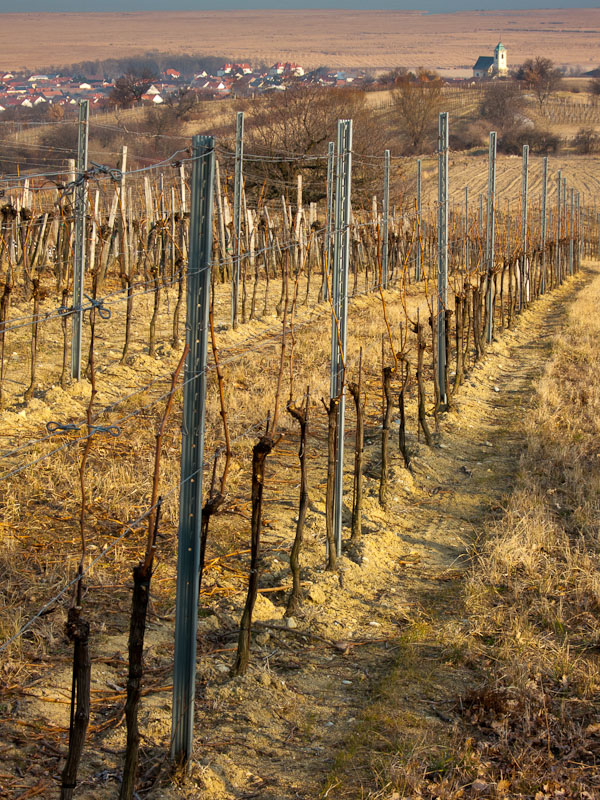 My first tastes of Austrian red wine were without context, and I will admit, not favorable. In tasting through the various portfolios of different importers, I would taste a lot of Riesling and Gruner Veltliner and occasionally find a red or two scattered in the mix. My impressions were not fully formed, but they weren’t encouraging.

But then I had the wines of the MORIC project in 2007, and I realized I was missing something. More importantly I realized that there was great potential in a place and a grape to produce a wine that was quite profound.

Therefore it was with great anticipation that I ventured south from Vienna into Burgenland, the heart of Austria’s red wine production area, which we know has been producing wines for nearly 3000 years, thanks to some recent archeological finds.

One of the key geologic features of Burgenland, besides lake Neusiedl, is a set of hills known as the Leithagebirge that represent the last folds and creases of the landscape (really the final vestiges of the Alps) before the earth flattens out into the Pannonian plain that sweeps down towards Hungary. This 40 kilometer long ridge that juts above the Pannonian plain is comprised of two primary geologic formations — a dense mica-schist and a fossil-laden marine limestone — which form the characteristic terroir of the region. These soils were instantly recognized by the Cistercian monks who settled the region as prime vineyard material, and so the slopes of these densely forested hills have been producing wine for centuries.

Standing at the crest of the Leithagebirge, the vineyards roll down in undulating hills towards Neusiedlsee, the shallow, reed-filled lake that Austria shares with neighboring Hungary. You can easily see all the way to Hungary on a clear day from the tops of the hills, but your eye is much more likely to settle on the lake, and closer still, the picturesque towns that nestle on its shores.

Starting in 2002 the Austrian wine industry began to move beyond the simple declaration and demarcation of specific wine growing regions to a more controlled appellation system called the Districtus Austriae Controllatus, or DAC. Much like the DOCG system in Italy, or the AOC system in France, the Austrian DAC system designates not only specific 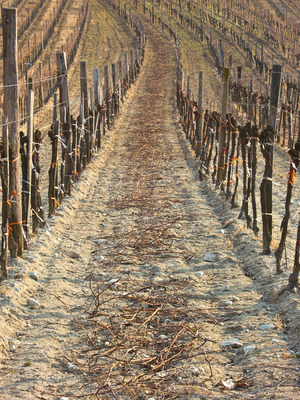 geographic specifications for wines, but also regulates quality and style to a certain degree. There are currently seven DAC regions in Austria.

In 2009, Austria created the Leithaberg DAC, covering the region surrounding the Leithagebirge and nearby Neusiedlsee. The DAC regulations for Leithaberg allow for the production of two wines, a white and a red, that can carry the DAC designation. The Leithaberg White can be made from Grüner Veltliner, Pinot Blanc, Chardonnay, or Neuberger (the historically planted grapes of the region) and the red, from Blaufränkisch (at least 85%). The DAC regulations also stipulate when the wines can be released, as well as their maximum alcohol level (not more than 13.5%) and the fact that the red must be aged in oak, but with a minimum of new oak influence (though there is no strict regulation on exactly how much is permissible). As with many such controlled appellation systems, the wines must be validated by a tasting panel before release. Currently about 70 producers make wine within the DAC delimitation (many more produce wine in the region under the broader regional appellation).

I had a chance during my visit to sit down and taste through a number of representative wines, both white and red to get a sense of the appellation.

I’ve decided to focus my attention on the reds. The whites ranged from decent to good but did not seem to have a strong of an identity as the reds. My favorites were those based on Pinot Blanc, but there just seemed to be too much variation in the wines, some of which were single varietals, some of which were blends, to really get a sense that the DAC designation meant something.

The reds, on the other hand were a completely different story. As I said, I came into this tasting with a keen interest in Blaufränkisch, and I emerged from it a complete enthusiast. While this was far from a comprehensive tasting of either the variety or the DAC as a whole, it taught me enough to be able to say with confidence that Blaufränkisch can make, 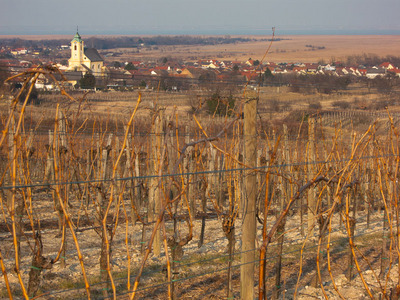 truly world-class wines. What’s more, I believe strongly that it shares with Pinot Noir a remarkable degree of transparency in terroir — an ability to clearly speak of the place from which it comes.

Finally, while I was provided only a single example, from a very good producer, I’m also very excited about the wine’s aging potential — not to simply survive in the bottle, but to transform and improve over time.

The notes below are not anything close to a definitive word on Blaufränkisch (which is also produced outside of the Leithaberg DAC, of course), they are merely the continuation of my own journey of discovery with this grape and the red wine terroir of Austria, which clearly has amazing potential.

2009 Hahnekamp-Sailer Blaufränkisch Leithaberg DAC, Burgenland, Austria
Medium to dark garnet in the glass, this wine smells of cherry and cedar. In the mouth, black cherry, black raspberry, cassis, and some white pepper spiciness mix amidst a very nice weight and silky texture. Faint tannins hang around the edges of the mouth and very nice acidity keeps the wine juicy and fresh. Nice finish. 13.5% alcohol. Score: around 9.

2009 Nehrer Blaufränkisch Leithaberg DAC, Burgenland, Austria
Medium to dark purple in the glass, this wine smells of piney and earthy notes with dark berry fruit and white pepper scents. In the mouth this wine expresses deep stony earth and wet chalkboard. Very supple, soft tannins all but caress the wine’s core of earth melded to cassis and black cherry notes. Fantastic. 13.5% alcohol. Score: between 9 and 9.5.

2009 Prieler Blaufränkisch Leithaberg DAC, Burgenland, Austria
Dark garnet in the glass, this wine smells of dark black cherry with a hint of white pepper and green herbs. In the mouth the wine has a dark cherry, floral, and white pepper aspect with light grippy tannins. The slightest hint of oak comes through both on the nose and finish, though it is a nice accent of complexity rather than overpowering. Very fine texture. Excellent acidity and faint tannins. Lovely. 13.5% alcohol. Score: around 9. Cost: $22. click to buy.

2009 Birgit Braunstein Blaufränkisch Leithaberg DAC, Burgenland, Austria
Medium purple in the glass, this wine smells of sweet cassis, raspberry and blueberry. In the mouth the wine has a wonderful aromatic sweetness (though is clearly dry) with cassis, blueberry, and gorgeous violet notes. A touch of wet stones lingers underneath the fruit in the finish, but definitely a purer fruit expression than some other wines in the region. Wonderful acidity and very faint, fine tannins. 13.5% alcohol. Score: around 9. Cost: $15. click to buy.

2009 Schwarz “Kloster am Spitz” Blaufränkisch Leithaberg DAC, Burgenland, Austria
Medium purple in the glass, this wine has a wonderfully complex nose of black cherry, cassis, and dried herbs. IN the mouth a wonderful balance of cassis and black cherry perfectly balanced with a wet stone minerality that is gorgeously fine grained. Faint tannins creep around the edge oft he mouth and the finish is long and incredibly nuanced. Outstanding. 13% alcohol. Score: between 9 and 9.5.

2009 Mad-Haus Marienberg Blaufränkisch Leithaberg DAC, Burgenland, Austria
Medium to dark garnet in the glass, this wine smells of white pepper and cassis. In the mouth cassis and white pepper flavors mix with a dark stony earthiness, but a bit of heat creeps into the finish. However, it’s not exactly an alcoholic heat, more like the heat of a Serrano pepper. Very nice. 13.5% alcohol. Score: between 8.5 and 9.

2009 Fiedler Blaufränkisch Leithaberg DAC, Burgenland, Austria
Medium to dark garnet in the glass, this wine smells of white pepper and black cherry. In the mouth the wine has an interesting creamy character with (relatively) more aggressive tannins than wines made higher on the slope of Leithaberg. Flavors of cassis and black cherry linger with a hint of brown sugar in the finish. 13.5% alcohol.Score: around 8.5.

1999 Prieler “Goldberg” Blaufränkisch, Neusiedlersee-Hügelland, Burgenland, Austria
Medium to dark garnet in the glass with only the barest hint of bricking at the rim, this wine smells of rich leather, cedar, red apple skin and wet earth. In the mouth, this wine is a sumptuous, sexy, smooth, and seamless blend of cherry, leather, cedar, wet stone, dark earth, and a remarkable berry sweetness floating above it all. Perfectly balanced, still with wonderful fruit and acidity after 14 years. Stunning, harmonious, incredible. Isn’t a Leithaberg DAC wine because it predates the appellation. 13.5% alcohol. Tried to buy a bottle, but Prieler wasn’t selling. Damn! Score: between 9.5 and 10.

There is a 2000 vintage Prieler available on the Internet, if you care to sample something older and interesting. 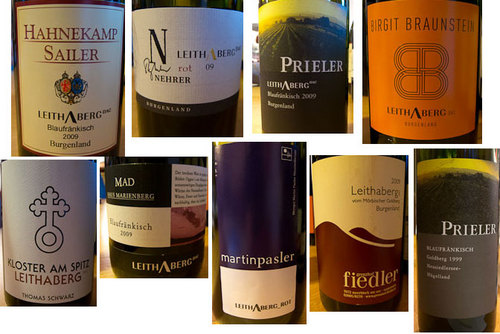 While I was unable to find many internet sources to purchase the wines above, I believe a bunch more of them are, in fact, imported to the United States. Ask your favorite local wine merchant who stocks wines from Austria.