The Future of American Wine 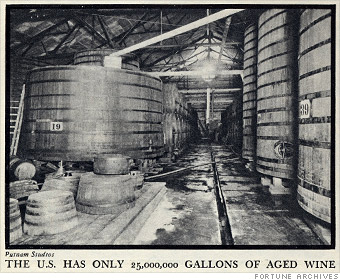 I just came across what is perhaps the most insightful, well written piece of commentary on the future of the American wine industry I have ever seen. It displays a command of the language, a quality of prose, and a level of research and insight that are altogether rare today in wine journalism.

That’s probably because the article was written in 1934.

Apparently Fortune magazine has, every Sunday, been publishing a favorite story from their archives, and today they decided to publish an article entitled “Can wine become an American habit?” which left my jaw on the table. It provides a remarkable window into the state of the American wine industry immediately following the repeal of Prohibition, as well as the 50 years of history preceding that momentous date.

Perhaps most interestingly, it provides (one magazine’s) opinion about the challenges inherent in building a wine culture in a country without an innate history of consuming wine. The following excerpt will demonstrate both the beauty of the writing as well as the remarkable quality of the (unknown) author’s insights:

“Wine is a habit, an industry, and an art. The men who pick and trample barefoot the rare fine grapes beside the Gironde have their own carafes filled with a liquid poorer than the grand Medocs, and in Jerez de la Frontera, whose brave wine the linguistically lazy English made famous, the people drink manzanilla, which is the unfortified wine of the country and cheap. A tall sleek bottle of Liebfrauenstift would not make a Rhenish peasant so gemütlich as beer; and the gypsies that sing plaintively across the Danube on still nights have their jugs filled, but a real Tokay is rarer than a clean gypsy. Fine wine is tradition and pride and love; it is not drunk by the peasantry and it is not conceived by fourteen years of prohibition.

Wine men like Mr. Garrett and many a similar character before him have wanted to be artists. Few in this country have succeeded; few will succeed in the near future. Mr. Garrett and some of his contemporaries would like to be educators, to give the U.S. peasantry a good, cheap wine, and to teach them to like it. But to live they must be businessmen, and their living lies in that broad middle class of wine the production of which is everywhere an industry. U.S. wine is in the immediate future forced into that class, whether or not Mr. Garrett and his colleagues like it. For of the 1,500,000,000 gallons of wine consumed annually in France at least four-fifths is vin ordinaire, while of the 150,000,000 gallons consumed last year in the U.S. at least four-fifths was, in price, wine of the middle class.”

That latter paragraph, if you’ll excuse (or excise) the slightly snide, upper-class tone, might well be written today with just as much accuracy. The dichotomy between fine wine and the wine that most people buy in supermarkets and restaurants in this country and in large cities all around the world is a constant tension between the profound potential of what the author calls “the artists” of the wine world and the fact that the adoption and strength of a wine culture depends upon millions of gallons of the kind of wine that the artists strive hard to differentiate themselves from, and the wine businessmen are reviled for producing at a profit.

If you have any interest in the American wine culture and the industry, you must read this article.

The author’s predictions about what it will take to produce a national habit of wine drinking are quite interesting. Based largely on the strength of native and hybridized grapes grown in many states, he proclaims America the greatest wine growing country in the world, and tends to discount California on that score: “If California had been any state but California it might have produced something fine in wines. But California has always done things on a grand scale; it would rather produce the most than the best….For the possibilities of wine as an art, or as a habit, in the U.S. we must go eastward.”

He got it half right. There is now at least one working winery in every state in the nation, and increasingly there are states other than California, New York, Oregon, and Washington with thriving wine industries that are producing very high quality wine, much to the delight of the locals (but unfortunately much to the ignorance of the rest of the country). Witness the rising stars of Virginia, Michigan, Arizona, and Texas, for starters. Part of the rationale for publishing this article was America’s newly minted status as the largest wine consuming nation in the world.

It’s amazing to see how far we’ve come, and to imagine where we might be in another 90 years.