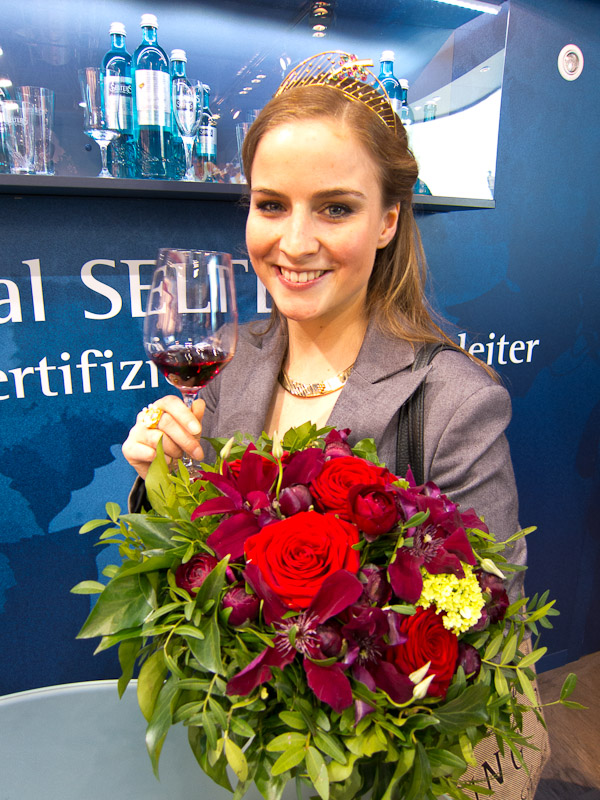 Beauty pageants have come and gone in America as a source of prime time entertainment. Where the Miss America pageant used to get serious top billing, it now can’t compete with even the middle-rung of reality television, which provides all of the drama, and infinitely more lascivious, trash-talking vicariousness than a family-friendly catwalk of beauties in bikinis who all love puppies and want to have six children.

Given the success of shows like American Idol, perhaps we’d still be interested in beauty pageants in this country if the competition also involved some degree of talent or intelligence beyond looking pretty on stage.

Which brings me to Germany’s reigning Wine Queen, who I met last month on my trip to ProWein, Europe’s largest international wine exhibition.

Her name is Annika Strebel, and she is the 63rd German Wine Queen, having been crowned this past September after beating out hundreds of hopeful contenders from other German wine regions in a series of local, regional, and national competitions throughout 2011.

And what do these competitions entail? More than many serious students of wine might be able to handle.

In front of an 80-member jury of wine professionals and journalists, contenders for the crown not only have to look great in a ball gown, they need to perform serious feats of wine knowledge, including:

In addition to the jury, there’s also the pressure of sometimes thousands of fans watching. In short, a pretty smile and a nice figure doesn’t get you very far.

The wine queen program is a remarkably savvy idea that celebrates many of the best things about wine and culture without falling prey to the trashier aspects of many beauty pageants. By celebrating beautiful, intelligent young women that are passionate about wine, the program both serves to attract younger people to the culture of wine, while at the same time demystifying and glamorizing it.

“Ever since the age of three, I wanted to be a wine queen,” said Strebel, as we stood in the corner of one of the larger mineral water booths at ProWein, where she had just spent 90 minutes taste-testing wine and mineral water pairings for the company.

Strebel admits that her childhood fascination with being a wine queen rested primarily on the pretty dress, the tiara, and the glamour of being on television, but growing up a daughter in a winemaking family (Weingut Strebel, in Rheinhessen), it wasn’t long before she realized being wine queen represented something bigger.

“I realized it was a chance for me to represent my 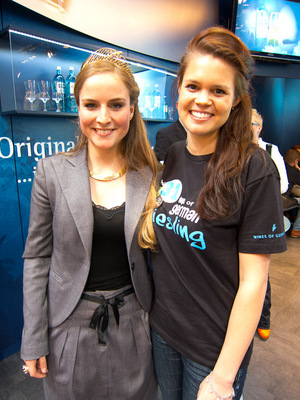 whole region, and to celebrate wine, which is so important to me and my family”.

Lest anyone think Strebel is kidding, she’s currently taking a year off from her viticulture and enology degree at Geisenheim, the most prestigious and competitive program of its kind in central Europe.

“Becoming wine queen pretty much turns your life upside down,” said Mandy Grossgarten, as she applied a temporary tattoo of the word “riesling” along the length of my forearm. Grossgarten was last year’s Wine Queen (pictured with Strebel at left), and was clearly basking in her return to civilian life (though it must be noted, my brief interview with her was interrupted no less than five times by people wanting autographs, photos, or just a quick kiss on the cheek).

“You have to give up a full year, and stop everything,” said Grossgarten, explaining that the average wine queen has more than 200 publicity appointments nationally and internationally, all coordinated and bankrolled by the German Wine Institute.

These appointments can range from the standard, such as appearing on morning talk shows, to the absurd.

“The craziest thing I’ve done so far this year,” said Strebel, “was an underwater wine tasting in SCUBA gear.” She went on to describe herself in full ball-gown and tiara in a pool surrounded by journalists, sipping wine through a straw in between puffs on her regulator.

“Yeah, it was stupid” she added. Not to mention a waste of a good ball gown.

All wine queens must be between 21 and 26 years old, and most are right in the middle of their university programs when they are crowned. After a year of putting boyfriends, college degrees, social lives, and pretty much everything else on hold, most wine queens end up working in the German wine industry, though some go on to greater visibility with careers on television or in film.

Strebel, for her part, is looking forward to completing her studies and then returning home to her family winery and taking over as winemaker from her father when the time is right.

In the meantime, she will apparently be a bit of a celebrity in the winery’s tasting room. In honor of her achievement, her father has released a Reserve Sylvaner called “The Queen” with Strebel lounging across the top of the label. “We have reason to celebrate!” said the family’s website.