In some ways the stories aren’t all that different. A wealthy businessman falls in love with wine at some point, starts visiting Napa, and eventually dreams of owning a vineyard, to make a small amount of wine, just for fun. A vineyard is purchased, wine made, and everyone lives happily ever after.

I can’t tell you how many times I’ve watched this narrative play out in Napa, and tasted the result.

Nine times out of ten, the wine that results from such a venture never transcends being merely good, even for those that have spent top dollar on grapes and a superstar consulting winemaker. At the end of the day, and at no small consolation to those of us who truly love wine, making exceptional wine seems not to be just a matter of spending enough money.

Figuring out what makes the difference between the ordinary and the extraordinary version of this take isn’t all that easy. On the surface Tom Futo and his wife Kyle are living the same dream as so many other newcomers to Napa. Yet Futo Wines has become one of the more remarkable projects to emerge in Napa in several years. As I spent time with Futo and his estate manager Joshua Lowell, I eventually concluded that there was no single thing that made Futo’s wine different than all the other expensive red wines that bear the names of their owners. Instead, like a delicate, counter-weighted Calder mobile, a combination of vision, site, and talent have come together to produce a wine that surpasses the sum of its parts. The differences are small, but their impacts are large.

Tom Futo by all accounts was destined to be a basketball player. He grew up in Wichita, Kansas, and headed to KU to play college level ball. But a knee injury changed everything, and the young man who had started buying stocks as a teenager, but considered himself more of a jock than anything else, decided to head towards a degree in business, with some dabbling in the sciences. Along the way he took a turn working in wine stores during college.

While he recalls having fun working in wine shops, the experience didn’t leave a lasting impression.

“I’m not sure I remember exactly when I fell in love with wine,” says Futo. “I had been out of college for some time, and hadn’t been drinking wine. But then my wife and I moved into a neighborhood where everyone seemed to drink wine but us. We ended up with four or so really good friends in the neighborhood and every Friday or Saturday night we’d all end up at one or another’s house drinking wine. We started going to wine shops and coming home with six bottles of red, or six bottles of white, and we’d taste, and take our notes, and figure out what we liked.”

Futo and his wife gradually settled on Cabernet Sauvignon as their favorite, and began to explore what the wine word had to offer, making trips to Napa, and keeping notes about what they liked and didn’t like.

“This was the 90’s. I had started reading Parker’s publication, and it was a great time for California wine with Helen Turley and Tony Soter making some great wines. We were also drinking French and Australian wines, but I gradually became drawn to the purity of fruit that I was finding in Araujo, Shafer, Colgin, Bryant, and Harlan. It was fun drinking those wines. Much more interesting than Bud light or Coors.”

Futo’s wine habit continued as he moved from success in healthcare sales, to management of a healthcare business, to greater success in investing and wealth management — a label I provide with Futo’s approval, after he proved somewhat circumspect about the specifics of his investment focus. “As far as I’m concerned, who really cares how I made my money?” he says. But when pressed about the relationship between his success in business and the success of his wines, it became clear that Futo approached the project with a combination of discernment and deep attention to detail.

“Give me the choice between seeing six concerts with average seats, and a single concert with front row seats, and I’ll choose the one concert with the great ticket every time,” says Futo. “I don’t drink wine for the sake of drinking, I drink wine to be fully engaged with what I’m drinking. The same is true for art, or anything else.”

Futo not only spared little expense in putting together the components that make up the winery, he started with a clear vision for the quality of outcome he was looking to produce, and as far as I can tell, Futo just seems to have higher standards for quality than a lot of people, a trait that can’t be underestimated when it comes to the making of wine.

One day Futo was approached by a golfing buddy from Kansas who was buying a 40 acre parcel of rolling hillside land tucked in between Harlan Estate and BOND and wanted a partner. Knowing Futo was thinking about getting into wine, he broached the idea of being partners. Futo was reluctant to become business partners with a good friend, and so passed on the opportunity, but the vineyard was spectacular, and he agonized a bit over the decline. 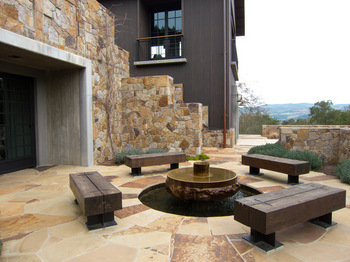 The golfing buddy ended up buying the property along with his wife, and after their divorce, the wife ran the vineyard for several years, but eventually decided she needed to sell, and knew the first person to ask. Sensing the perfect opportunity, Futo leapt at the chance, and after buying the property in 2002 began an intense project to create a wine that matched the one he held in his mind’s eye.

He interviewed a lot of people, and eventually settled on the combination of vineyard manager David Abreu and winemaker Marc Aubert. In close collaboration with these two Napa superstars, Futo replanted much of the 13 or so acres on the property, which was the former site of a winery called Oakford Vineyards, a brand long deceased. In 2004 Futo added another 117 acres of land to the estate and planted an additional six. In doing so, Futo and Aubert made the clear decision to plant a significant portion of the vineyard planted to Cabernet Franc and Petite Verdot.

Aubert helped Futo design a small, no-nonsense winery and they brought in the first harvest in 2004, and a second in 2005. The wines were remarkable, but Futo wasn’t satisfied.

“We had the property, and then the people, which is where it all starts, but we had to have a facility,” says Futo. “It’s so much better than a co-op situation. When you own your own stuff you have complete freedom and complete control to do what you want. That’s what we needed.”

Aubert helped to design a small winery in 2005, which was still under construction for the 2008 harvest, but close enough that construction could be stopped, and the grapes brought in for fermentation. At this point Aubert, who had been working more or less full time on the project, hired an assistant, Jason Exposto to bring in the 2008 vintage, and based on his strong performance, handed over the winemaking reins for the 2009 vintage. Recently Futo also transitioned vineyard management to a firm managed by Josh Clark.

For having 13 or so acres planted, Futo ends up making a minuscule amount of wine (roughly 1000 cases a year of a single wine). The winery itself is set up to handle perhaps little more than three thousand. The focus here, then, is unrelentingly towards quality with draconian levels of fruit selection that means most gets sold to others.

The winemaking regimen rather unusually involves a lot of cofermentation of Cabernet Franc and Cabernet Sauvignon, rather than the usual separate vinification and later blending. All of the cellar work is done by Exposto and Lowell with very few other hands involved in the progress.

Futo remains singularly focused on producing the best wine that the vintage can offer. “That’s why sometimes you’ll see 300 cases and sometimes 800 cases,” he says. “We’re going to do the best with what’s available to us.”

Recently the winery started a second label called “OV” which is a nod to the vineyard’s old brand name. But unlike most second labels, which are a way to deal with a lot of fruit that doesn’t make the cut for the first wine, OV is produced in quantities approaching 120 cases, and also involves some purchased fruit.

The Futo wine, in addition to being exceptionally well made, has a distinctive character to it that comes not only from the specifics of the five distinct vineyard sites on the estate, but also from the higher proportion of Cabernet Franc and Petite Verdot that make their way into the blend each year. These grapes seem to do quite well on Futo’s hillsides, and both Aubert and Futo recognized that they brought something special to the wine.

Like a more complex chord, Futo wine reflects a compelling intricacy that expresses an incredible standard of quality in its composition. The wine’s price reflects its place among Napa’s top red wines, but its flavor makes it the most clear where it belongs. While not many people can afford wines like this — myself included — for those who can, Futo is a better wine than many in this echelon of Napa.

2009 Futo Estate Proprietary Red Wine, Oakville $225
Inky garnet in the glass, this wine has a nose of rich black cherry with a hint of briar and cedar. In the mouth the wine has incredible purity and length, with a gorgeous balance between ripe cassis and black cherry fruit and a sumptuous dark chocolate quality. Notes of cedar and cocoa powder spiciness linger through a very long finish. Wonderful acidity and silky texture make this a stupendous effort. 550 cases produced. Score: between 9.5 and 10. Sold to mailing list only, but can occasionally be found at retail for a markup. click to buy.

2009 Futo Wines “OV” Proprietary Red Wine, Oakville $90
Medium to dark garnet in the glass, this wine has a nose of sweet cherry aromas. In the mouth, that bright cherry fruit continues to dominate, mixed with flavors of chocolate and cola. Powdery tannins emerge on the long lingering finish. Good acidity and balance. Score: between 9 and 9.5. click to buy.